GOP Catholics think they know better than the pope: Why they break with Francis on poverty, death penalty and free markets

Santorum dissed the pope for his views on climate change. It isn't the only time he's slighted His Holiness 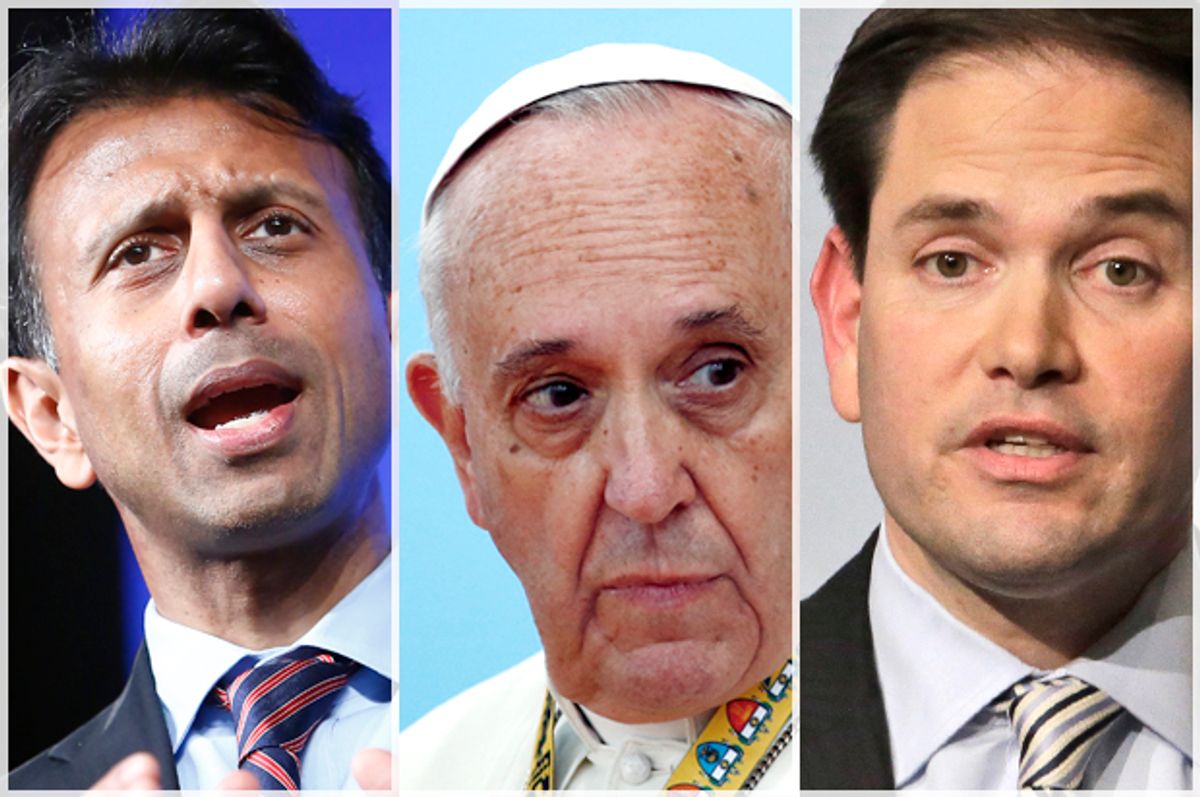 Last week, Republican presidential contender and devout Catholic Rick Santorum threw some shade at Pope Francis. Santorum said that he was a “huge fan” of His Holiness, but took issue with Francis aligning himself with 97 percent of climate scientists and speaking out on global warming. The church had “gotten it wrong a few times on science,” Santorum remarked, adding that the pope should stick to “theology and morality” instead of, say, talking about arctic melt.

Santorum isn’t the only cafeteria Catholic running for the Republican nomination in 2016. Marco Rubio, along with rumored runners Jeb Bush, Bobby Jindal and Chris Christie, are also pretty selective about when they stand with their main man Francis. When it comes to denying people reproductive health care and saying that gay couples can’t get married, the GOP’s Catholic is behind the Holy Father, drawing a direct line from their policies to their faith. But when Francis takes on the death penalty, income inequality and the "tyranny" of free market capitalism, Rubio, Bush and co. tend to have their own ideas about what Jesus would do.

Pope Francis does not equivocate on the death penalty: he opposes it in all circumstances. He is also outspoken on what he says is the cruelty of life imprisonment -- which he calls a “hidden death penalty” -- and the moral imperative for prison reform:

All Christians and people of goodwill are thus called today to struggle not only for abolition of the death penalty, whether it be legal or illegal and in all its forms, but also to improve prison conditions, out of respect for the human dignity of persons deprived of their liberty. And this, I connect with life imprisonment. Life imprisonment is a hidden death penalty.

Rick Santorum: Supports the death penalty because “when there is certainty [that a person is guilty], that’s the case when capital punishment can be used.”

Chris Christie: Supports the death penalty. New Jersey abolished the capital punishment in 2007, but Christie said he would support legislation to reinstate it.

Bobby Jindal: Supports the death penalty, and has contextualized it as consistent with a culture of life:

We're made in God's image, and it's tragic that the modern world doesn't take the value of life more seriously. I describe the case of a little girl who was brutalized by her stepfather and will never be able to have children. We should do everything we can to go after these monsters. The Catholic Church and many churches teach that the death penalty should be reserved for the most serious crimes, and I agree. I was frustrated when the Supreme Court took this option off the table.

“Blessed are the poor” is supposed to be an article of faith for all Catholics, but Pope Francis goes beyond biblical platitudes when speaking out about inequality and poverty. In addition to calling on individual Catholics to care for those struggling in their communities, the pope has called out global elites for their complicity in creating poverty and exacerbating inequality. He is a vocal critic of trickle down economics and has called unfettered free markets a kind of “tyranny.”

A few choice quotes that make clear the pope’s disdain for the excesses of capitalism:

In this context, some people continue to defend trickle-down theories which assume that economic growth, encouraged by a free market, will inevitably succeed in bringing about greater justice and inclusiveness in the world. This opinion, which has never been confirmed by the facts, expresses a crude and naïve trust in the goodness of those wielding economic power and in the sacralized workings of the prevailing economic system.

While the earnings of a minority are growing exponentially, so too is the gap separating the majority from the prosperity enjoyed by those happy few. This imbalance is the result of ideologies which defend the absolute autonomy of the marketplace and financial speculation. Consequently, they reject the right of states, charged with vigilance for the common good, to exercise any form of control. A new tyranny is thus born, invisible and often virtual, which unilaterally and relentlessly imposes its own laws and rules.

Marco Rubio: Thinks the government is “incapable” of alleviating poverty and praised free markets “the single greatest engine of upward mobility in human history.” In the same speech, he said that raising wages and expanding the social safety net to support families living in poverty was not the solution to growing inequality. Instead, he offered "real American free enterprise" and "eliminating regulations that prevent employers from expanding and our energy sector from growing."

Jeb Bush: Like Rubio, Bush is among the Republicans newly interested in inequality. And like Rubio, his rhetoric centers on the “skills gap” and market-based approaches to education, not taxing the wealthy, raising wages or expanding the social safety net. As another signal of where he stands, Bush has also enlisted economist Glenn Hubbard -- the brains behind President George W. Bush’s tax cuts for the wealthy -- as an adviser on inequality.

Chris Christie: Said in 2011 that a family making $6,000 a year is too wealthy to qualify for Medicaid. That means a family of three earning just over $100 a week would be excluded from the program. At the state’s current minimum wage, workers who can maintain a full-time schedule are making around $300 a week, more than $700 short of a "living wage," according to MIT’s living wage calculator. But even $300 a week would have priced families out of Christie's vision for who should qualify assistance.

Bobby Jindal: Thinks the pope isn’t really talking about America when he talks about rampant inequality. He also thinks the pope gets it wrong on free markets (emphasis mine):

I don’t want to try to pretend like the Pope is endorsing conservative Republican views on tax rates and other things that we fight and care about. But I do think, I do think that it’s important to understand when he talking to a global audience about the exploitation of the underprivileged, and those that…we’ve got to understand that he’s speaking to a global audience. I think it’s a big mistake to try to translate this leader of a global faith into well, therefore he must be for or against charter schools, or he must be for or against my tax package.

You know, I’ve got enough humility to know that that’s not the right way to look and understand what it is his message is. So I think that we shouldn’t fall into the same trap as the liberal media. Now as a Catholic, I do believe that free markets, and not just as a Catholic, as a conservative, as a Republican, and just as a public policy person, I do think free markets, and I don’t think this is easily disputed, I do think free markets have done more to lift people out of poverty than all these other different redistribution schemes in our modern history.

Pope Francis is equally clear about wages. He has said that going to church doesn't wash away the sin of depriving workers of a fair salary:

Rick Santorum: Supports raising the minimum wage -- by a dollar. Santorum criticized President Obama’s proposal to raise the minimum wage to $10.10 because he thinks it's a job killer. "If you look at the CBO report, half a million people would lose their jobs as a result of the Obama minimum wage increase. I’m talking more in the range of a dollar, phasing that in."

Marco Rubio: Opposes proposals to raise the minimum wage, because “when you raise the price of employment, guess what happens? You get less of it.”

Jeb Bush: Earlier this year, Bush alluded to abolishing the federal minimum wage, but a spokesperson walked back the position, suggesting that Bush only wanted to freeze the minimum wage at $7.25. Bush's original remarks suggest otherwise:

We need to leave it to the private sector. I think state minimum wages are fine. The federal government shouldn’t be doing this. This is one of those poll-driven deals. It polls well, I’m sure – I haven’t looked at the polling, but I’m sure on the surface without any conversation, without any digging into it people say, ‘Yea, everybody’s wages should be up.’

And in the case of Wal-Mart they have raised wages because of supply and demand and that’s good. But the federal government doing this will make it harder and harder for the first rung of the ladder to be reached, particularly for young people, particularly for people that have less education.