Massive endowments, massive tuition, massive debt: Our colleges are out of control and crushing students

Become a prostitute or drop out: That's the choice one NYU student faced. Administrators get rich, students overpay 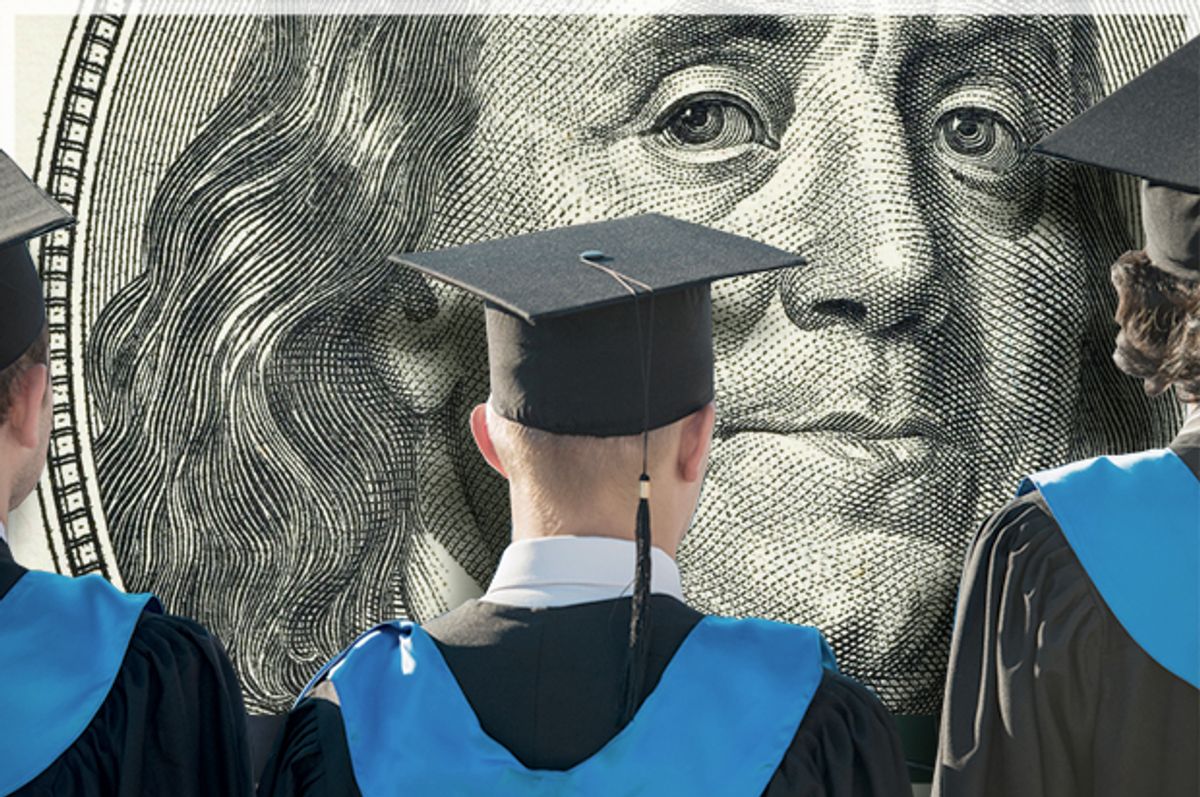 Prostitution comes in many forms. Consider the story of a New York University student, who finds that her school -- the most expensive in the country -- has raised prices yet again, and that she needs $2,000 she doesn’t have to remain enrolled. She visits the financial aid office, where an administrator literally laughs in her face. “He couldn’t believe,” she says, “that anyone would have trouble raising such a small amount.”

Desperate, she turns to Seeking Arrangement, an Internet site where rich, often married, older men search for young women who are willing to “date” them in exchange for various gifts. The NYU student felt she had no choice in the matter: “It was either that, or drop out” she says. She soon discovers she’s not alone:  “It was a hard choice; and I’m not the only one who had to make it. When I finally got the nerve to tell my roommates I’d been doing it, they told me they’d been doing it too.”

This cautionary tale from the new Gilded Age is just one of several similarly disturbing stories from “The Art of the Gouge,” a 14,000-word report published by a group of more than 400 NYU faculty members. They are fed up with seeing a distinguished research university transformed into a multi-billion dollar student loan-funded vehicle for real estate speculation -- one used by top administrators to pay themselves seven-figure salaries, as well as other lavish perks.

The faculty’s protests are focused on the so-called Sexton Plan. NYU’s president John Sexton is pushing to expand the university’s already-extensive investments in Manhattan real estate by spending mind-boggling sums on yet more Greenwich Village projects, including $1 billion on a single new building.

Like other non-profit universities, NYU is designated as a non-profit institution, which means it doesn’t pay any real-estate taxes.  The school’s recent charitable activities include things like purchasing a $5.2 million condo on Central Park West, as part of a sweetheart deal to lure a Columbia professor to NYU’s law school. (Sexton was dean of the law school before becoming the university’s president.)

The report features many other eye-popping examples of how the revenues from the school’s more than $70,000-per-year cost of attendance are being spent, while at the same time some students find themselves homeless, underfed, and desperate enough to trade sex for tuition money.

Now in a sense it’s unfair to single out NYU, since the school under Sexton has merely been engaging in a somewhat more extreme version of the incredibly expensive pursuit of ever-more revenue that has consumed so much of contemporary American higher education.

For example, Yale’s tax filings have just revealed that the school gave departing president Richard Levin an $8.5 million going-away present when he retired in 2013. The lump sum payment -- given to an administrator who had been drawing a salary of more than $1 million per year -- was defended on the basis of the claim that, comparatively speaking, Levin had been working for Yale practically for free: “He could have been in investment banking, he could have been in venture capital, he could have run a corporation,” claimed former Proctor & Gamble CEO and Disney chairman John Pepper, who was part of the managing board that approved the payment. “Obviously, if he’d gone into other fields, the compensation would be orders of magnitude greater.”

This is all part and parcel of the increasing corporatization of the American university: Just as in the case of grotesquely overcompensated CEOs, we must pay university administrators millions, because the logic of “the market” dictates that it’s necessary to do so to compete for supposedly scarce talent.

One problem with this little laissez-faire fable is that this particular market depends heavily on taxpayer subsidies. (I calculated recently that American higher education receives $160 billion per year in government subsidies -- and this amount doesn’t include more than $1.2 trillion in outstanding student loan debt, most of which consists of public money). Another is that turning the university into a revenue-maximizing business inevitably subverts the institution’s central purpose, which is the pursuit and transmission of knowledge. To see why, consider the extent to which universities now have financial structures which require their top administrators to spend almost all their time begging rich people for money.

Not long ago the only schools with billion-dollar endowments were the usual Ivy League suspects. Now more than 100 colleges and universities are in that group, and the total is growing rapidly. (When I graduated from the University of Michigan in 1982, the school’s total endowment was $115 million. Last summer it had grown to $9.7 billion: an 84-fold increase.)

The invidious effects of this money-mad system are legion. A relatively trivial one is reflected in Pepper’s rationalization for Levin’s compensation: because university presidents spend all day and half the night sucking up to billionaires, they feel poor when they get paid a lousy $1 million per year.

A far more serious problem is the unspoken, and even to some extent unconscious, incentives and distortions created by a system in which university budgets become increasingly dependent on the continuing generosity of the wealthiest Americans. Those incentives rarely come in the form of an explicit quid pro quo.  But one doesn’t have to be a young woman in desperate financial straits to realize that rich old men generally expect to get something for their money.

In this regard, the contemporary university increasingly finds itself “seeking arrangements,” as it were, that inevitably lead it into various compromising political, ethical, and intellectual positions.