"Him getting fired is not enough" 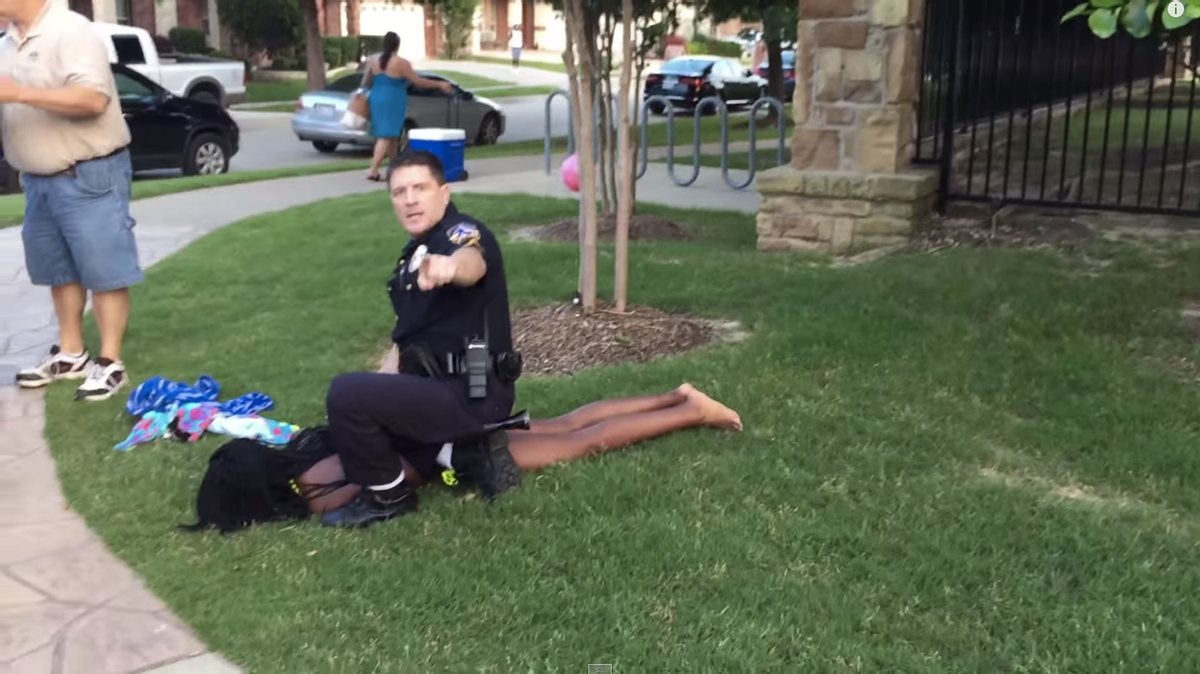 A Dallas-Fort Worth cop was suspended after a video surfaced showing him cursing, handcuffing several teenagers and pulling his gun on them, and pushing a teenage girl face-first into the ground.

Several police officers were called to Texas' Craig Ranch North community pool at 7:15 p.m. on Friday after receiving calls about a disturbance. According to a police statement, a local resident called to notify police that there were several out-of-area teens who didn't have permission to be at the pool. Soon after, a few calls were made about teenagers "actively fighting."

Witnesses at the scene, however, maintain that a fight broke out when white adults became aggressive with several black teens, taunting them with racial epithets and joking that they should "go back to Section 8 (public) housing."

In a video that surfaced this weekend, McKinney police corporal Eric Casebolt can be seen removing his weapon and threatening some kids with it, before shoving 15-year-old Dajerria Becton to the ground and pinning her there with his knees.

"He grabbed me, twisted my arm on my back and shoved me in the grass and started pulling the back of my braids," she said in an interview with Fox 4 Dallas. "I was telling him to get off me because my back was hurting bad."

"Him getting fired is not enough," she continued.

"First responding officers encountered a large crowd that refused to comply with police commands," read an official police statement. "Nine additional units responded to the scene. Officers were eventually able to gain control of the situation... At this time, one of the responding officers has been placed on administrative leave pending the outcome of this investigation."

In an interview with BuzzFeed News, several of the party attendees said a fight broke out between adults and teenagers after the adults made a racist comment and told the kids to go back to "Section 8 public housing."

The host of the party, Tatiana Rose, 19, said that one of her younger brother's friends, who is white, criticized the adults for their racism.

"Then they started verbally abusing her, saying that she needs to do better for herself, cursing at her. And I'm saying, no, that's wrong -- she's 14, you should not say things like that to a 14-year-old."

When Rose stood up for the girl, one of the adult women slapped her in the face.

Indeed, some local homeowners said in an interview with Fox 4's Zahid Arab that they believed the officers' safety was "at risk."

"I feel absolutely horrible for the police and what's going on," one said in an interview. "They were completely outnumbered and they were just doing the right thing when these kids were fleeing and using profanity and threatening security guards."

The pool even put up a sign to thank the local police.

"I'm just upset that we couldn't have a peaceful event," said Rose's mother, LaShana Burks. "If it was any issues that they truly had, they should have came to me, the adult that was here at the event, and said, 'Hey, we don't want the kids,' whatever, then let me handle it and not go to that extreme."