The bathroom crisis that ruined my life: I couldn't pee for nine months

I was 19, but I thought my body was ruined. Who would have thought a psychological cause was to blame? 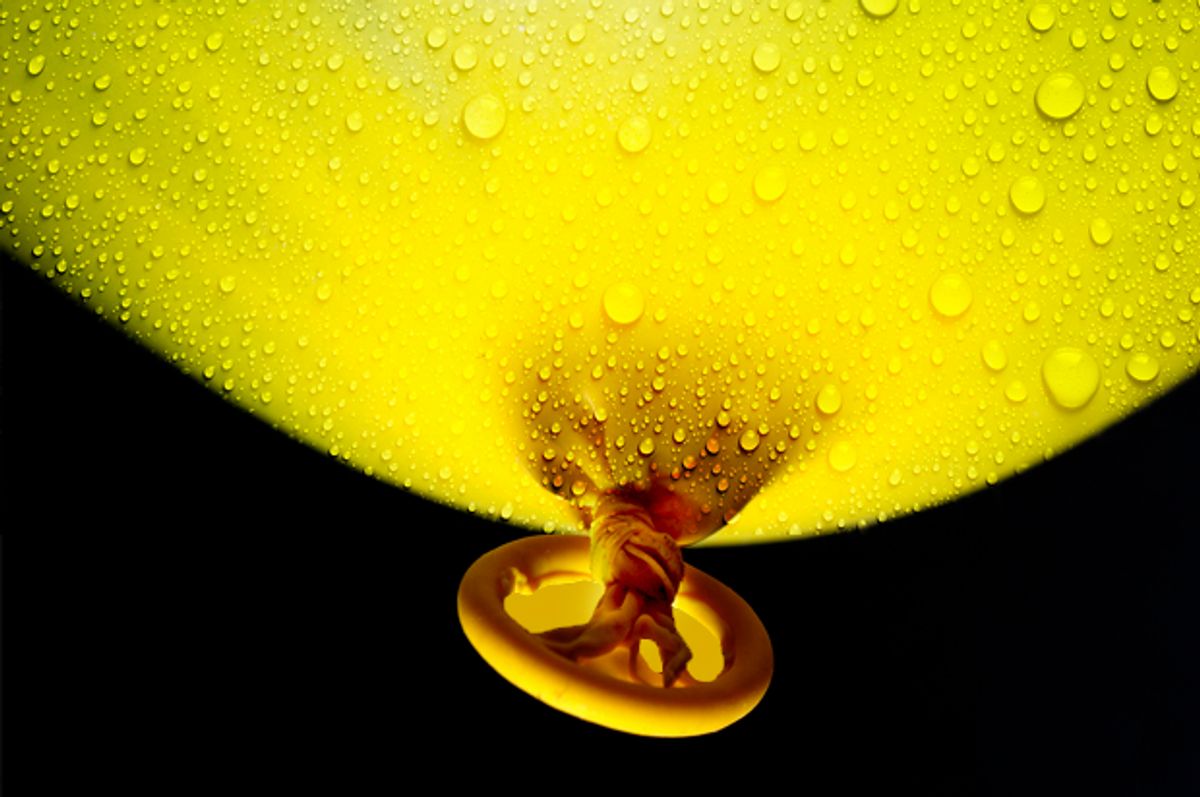 I once lost the ability to pee for nine whole months. For the better part of a year, my life was a nightmare of lonely trips to the bathroom. I spent hours standing over the motionless water of countless toilets, laboring in confusion to produce even the slightest dribbles. I was an otherwise young, fit and healthy person but had become the victim of a strange, biological mystery that I could not solve.

I don’t remember how the problem started. It wasn’t like the beginning of a football game, with a kickoff signifying the possible carnage to come. The onset of my urination struggle was more like a voodoo curse cast on me from afar. One day, I had to pee more often than usual. Except when I tried to pee, nothing came out.

In the beginning, I thought I would overcome it. I figured it was a brief phase that would resolve itself soon enough. But the pipes remained dry.

Why is this happening? I’d think to myself, lying face up in bed, as if asking the heavens. My dad thrust the word “prostate” at me. He said the underlying cause was probably a tensed up little gland that sat in my rectum and controlled my urine stream. But such insight didn’t do justice to the demon grasping my loins. Confusion was gradually giving way to panic, but the 19-year-old college-bro in me refused to let it show.

That’s because when I was a sophomore in college, my deepest aspiration was to be loved by my peers. I wanted their adoration, their votes of confidence, their high-fives and party invites. I yearned for some kind of local celebrity stature, but the fight for such vaunted respect came at the cost of severe social anxiety. I’d always had nervous tics, but this was psychosomatic neurosis that I could little comprehend.

My life started to revolve around my need for the toilet. Urination became everything to me. What started as a bathroom run every 30 minutes became a full-blown cyclone of inner turmoil. I was caught in a terrible cycle — I couldn’t pee because I was nervous, and I was nervous because I couldn’t pee.

In a matter of weeks, I was tethered to a bathroom stall. I developed a toilet GPS that helped me locate any urinal before the threat of pissing myself emerged. I got up at least three times during any lecture to urinate, and if I needed to go more, I’d sit and wait in my seat, too embarrassed to face the awkward glances of my classmates. I had wet spots on my underwear due to a latent drip that oozed throughout the day. Dark circles formed under my eyes because I spent most nights walking to the bathroom. I felt loneliness like I never had before. I was OBSESSED with peeing, but peeing didn’t give a damn about me. My life was the unpeeing -- a movie that was part zombie film, part “Groundhog Day” without the love interest or transcendental twist.

My dad sent me to his urologist. While my 19-year old counterparts were diving into beer cans and bong sessions, I became familiar with professionals who studied ailing urinary systems. I refer to my first urologist as the pamphlet doctor. After 10 minutes talking to me in a darkened medical office, he determined my prostate was inflamed just like the other Social Security recipients waiting there to see him. Dr. Pamphlet handed me his trademark piece of medical literature, a paper handout detailing Prostatitis, which explained that even though I was young, fit and healthy, my prostate was inflamed, sluggish and worse for wear. Troubling news, to be sure, so Dr. Pamphlet prescribed me some antibiotics to quell the inflammation. I took the pills, but they did nothing.

The second doctor was fast, smiley and sincere, but something didn’t compute with him about my age, medical history and current penchant for the bathroom. Dr. Sincere ordered me a CT Scan to probe the inside of my bladder, to see if there really was some dam-erecting monster blocking off my urine stream, but I turned out to be fine. Dr. Sincere suggested alternatives like acupuncture or talk therapy, and moved on to the next patient.

Later, after I left Dr. Sincere's office for the last time, I stood in the parking lot and cried. I felt like a withered octogenarian, afflicted with body failures that boded poorly for my quality of life. But the scariest part was the mystery of it all: two specialists and a CT scan couldn’t pinpoint the culprit. I felt this was a dead end.

To understand me then, the lonely college sophomore crying in a medical office parking lot, you have to understand the concept of self-love, and believe the fact that loving myself was once an entirely foreign concept to me. And it’s really no one’s fault but mine -- I had good parents who heaped praise on me when I deserved it and who scolded me when I was bad.

But I was desperate to be the best at everything -- the funniest guy at the party, the most superior athlete in the game, the best drummer playing a gig. I wanted everyone to like me, even if they were shitheads undeserving of my time, thoughts or energy. The results of yearning to be amazing, or yearning to amaze everybody at every turn of life, left me perpetually irked and unable to enjoy anything.

As the school year progressed, and my condition didn’t change, I found myself slinking away from my friends, because I knew they wouldn’t understand what I was going through. My dad would call me regularly and ask, “How’s the prostate?” as if we were sitting in an old folks home with blankets on our laps.

“It’s not my prostate, Dad!” I'd say with the tone of a moody teenager, though those words were never said in any teen film I’ve ever seen. “The doctors know that! Jesus!”

Eventually Mom did some research and found a specialist in Los Angeles. Another flight, another urologist — this time at UCLA Medical Center.

I walked into the doctor’s office like a zombie -- pale-faced and at my wit’s end. Before he had time to pull up my medical history, I began pleading with him.

“Please, this is ruining my life,” I said. “My whole life revolves around peeing! I don’t know what to do!” I said.

He assured me he’d heard that line before. “Have you had a rectal examination yet?” he asked, not breaking eye contact.

I gulped. “No,” I said. Well, this was inevitable.

Five minutes later, my anus had been penetrated by a stranger’s fingers clad in latex gloves (luckily the stranger was the doctor). The doctor found nothing. No sign of a physical symptom, no reason for antibiotics, but there was still one hope.

“I’m going to prescribe you a small dose of an antidepressant that sometimes helps treat chronic pain,” he said. “It’s called Elavil; let me know how it works.”

With an air of skepticism I started taking the pills. I’d long had reservations about chemically induced happiness, even though I had fits of depression throughout high school and college. I had no faith that these puny tablets would possibly loosen the death grip some mysterious force had on my internal organs, but I took them anyway.

And to my surprise, they worked. They worked so quickly and so well that my problem just kind of wilted away in a matter of weeks. Nine months spent running to the toilet to relieve myself, nine months spent crying and searching for meaning, all flushed down the toilet by a tiny blue tablet. The miracle pills afforded the doctor a new name. He was now Dr. Revelation.

In hindsight, the problem was a symptom of social anxiety that manifested itself in a glorified version of “shy pee syndrome,” the medical term for which is Paruresis. Other names for it are “shy bladder syndrome,” “psychogenic urinary retention,” or “pee-phobia.” What antidepressants like the one Dr. Revelation prescribed me do is stop obsessive thinking patterns, or at least provide some kind of placebo effect to help the patient calm down.

It’s a shame the greater medical community isn’t more attuned to mind-body disorders and their crippling hold on so many suffering people. For example, medical research related to back pain and back surgery is one of the most costly medical enterprises in the country. But lots of back surgeries don’t work or alleviate much pain. Maybe, in the case of many sufferers, stress is to blame. Some prominent researchers seem to think so.

Anyway, in my case, the nightmare that played on loop like “Groundhog Day” suddenly gave way to a massive breakthrough, and I now know myself and my body infinitely better. I still have flash points occasionally. Sometimes I’m standing next to a bunch of guys in a crowded bathroom and I have a hard time going. Sometimes I’m antsy and I feel like I have to go piss when I don’t have to, just like six years ago. Other times I don’t think about it and piss with reckless abandon.  But, despite whatever temporary anxiety I may still have at the urinal, I know for certain that nothing is physically wrong with me. You never appreciate something till it’s almost gone, even if if that something is peeing. I’ll never take pissing for granted again.

Sam Blum is a writer based in New York. His work has appeared in the Guardian, Village Voice, Vice and Salon. Follow him on Twitter @Blumnessmonster.