The GOP's demented family values: From the Duggars to David Vitter, again and again, the social conservatives have horrifying hypocrisy problems 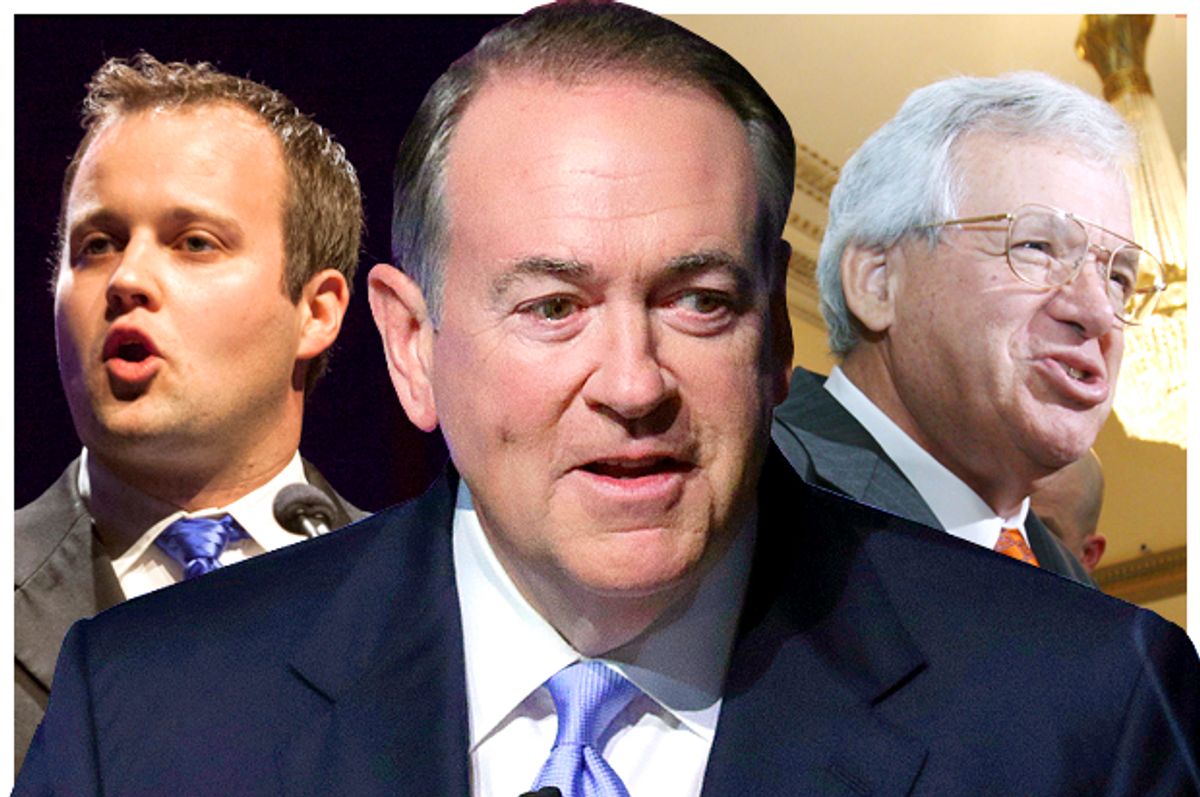 There’s an impressive legacy of moral hypocrisy on the right. From Mark Foley to Newt Gingrich to David Vitter to Larry Craig to, most recently, Dennis Hastert, the GOP is perpetually plagued by scandals. This is a curious phenomenon, considering that it’s the Republicans, not the Democrats, who fancy themselves the party of family values. It’s clear, though, that their ranks are lined with liars who rarely live by the light of their own values.

Worse still, Mike Huckabee's actions after it was revealed that Josh Duggar sexually abused four of his sisters. Huckabee rushed to the Duggar family's support -- then silently scrubbed their endorsement from his website.

We ought to view the Republican Party as a case study in overcompensation. It appears the majority of their members moralize in proportion to their sinfulness. Even more annoying, when busted, their response is always to double down on their false convictions. Their hypocrisy and moral failures feel routine at this point. This is unfortunate for a couple of reasons. For one, the public becomes desensitized to this sort of thing, which means the hypocrites are able to survive their scandals.

But more important, the GOP’s posturing has been a persistent obstacle to progress. Wherever attempts have been made to reform racist drug laws or advance civil rights for gay Americans, Republicans have undermined them. If they did so on legal or economic grounds, that would be one thing, but that’s not the case. Instead, they cloak themselves in the language of values, which is all the more astonishing given the immorality of so many Republicans. Because they insist on preaching, because they insist they’re defending family values, we should expect social conservatives to uphold them in their own lives.

I don’t give a damn if Eliot Spitzer cheats on his wife. I don’t care if Anthony Weiner texts pictures of his penis; that’s not my business. Spitzer and Weiner, like most Democrats, aren’t pushing regressive public policies on the basis of their personal moralities. But I do care when Larry Craig, a former Republican and staunch opponent of LGBT rights is found allegedly soliciting gay sex in an airport bathroom. And the reason is simple: There’s a glaring contradiction between his public pronouncements and his personal conduct. This man was essential to the passing of the “don’t ask, don’t tell” policy, which threatened gay service members with a discharge if they were honest about who they were. If a public official makes a show of his personal virtue, we’re entitled to judge him according to those standards, particularly if those standards stand in the way of social justice.

If Republicans were merely hypocrites, they would be more like the Democrats. The difference is that only Republicans, the party of small government, insist on legislating their morality. That they show themselves, time and again, to be frauds only heightens their offense. The recent Hastert revelations are a reminder that we should be especially suspicious of self-righteous conservatives. Moralizers are typically the least moral, the people who have the most to hide. Those who claim the high ground are rarely who they say they are, and almost always the very thing they pretend not to be; Republicans have made it impossible to forget that.

There is good news, however. As a recent Gallup poll confirmed, the country is changing. There’s no need to convince people like Bobby Jindal and Mike Huckabee that we don’t live in the 19th century. There’s no need to persuade the “family values” crowd that they’re wrong; that their positions on marriage and sex and birth control and civil rights and drug laws are backward and out of step with most Americans. The country is moving forward in spite of their obstinance.

When the zeitgeist shifts, as it has on most of these issues, it becomes embarrassing to hold archaic views. We’ll never be rid of racists, for example, but it’s more difficult to be a racist today than in previous decades. In most places, to self-identify as a racist is to declare one’s self an idiot. This is what social progress looks like, and it’s a consequence of changing cultural norms. The same is true of homophobia. Thirty years ago homophobia was uncontroversial; today it’s tantamount to bigotry. In a decade or so, when the battle for LGBT rights is over, it will be politically untenable (and morally obscene) to deny equal rights to gay people; one waits in vain for Republican to notice this.