We're all ShamWow schemers now: The American dream is now selling useless nonsense to other suckers -- even our Facebook friends

A stable career? Building a business? While D.C. has same useless debates, a desperate middle class tries anything 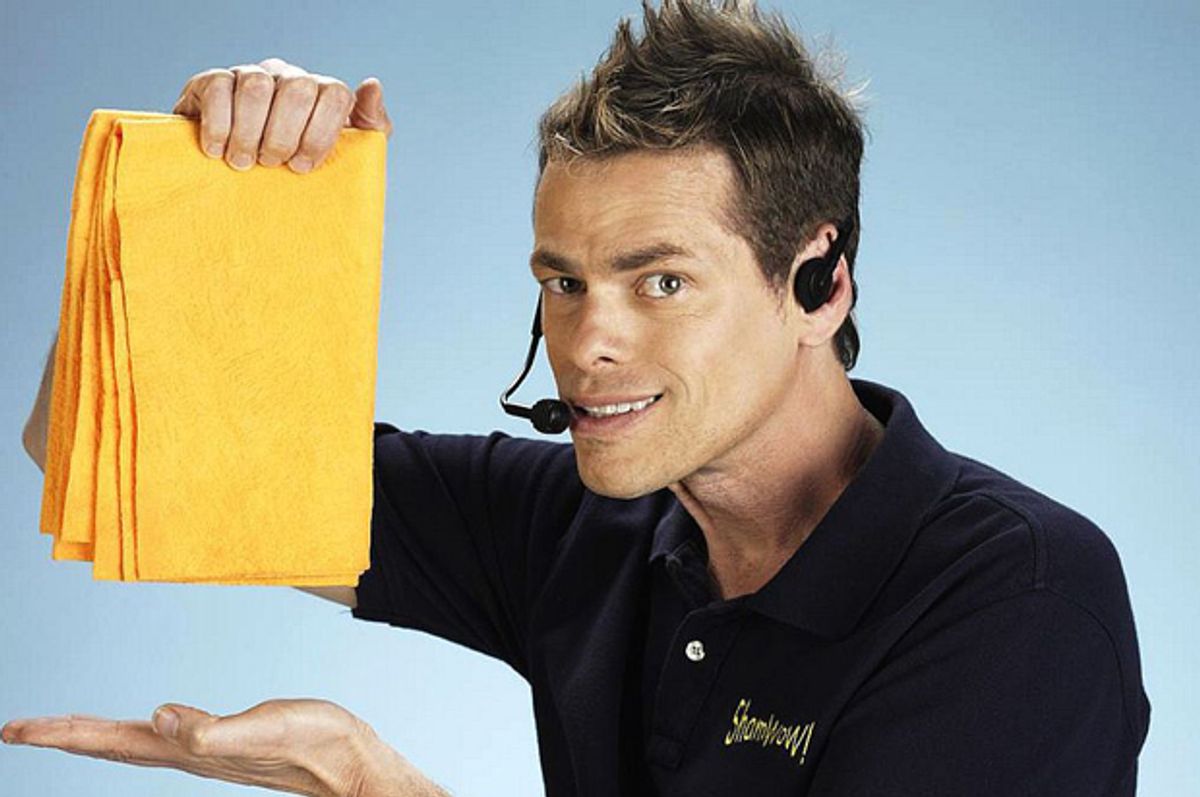 There was an educated and sophisticated woman I knew in the small mining town in which I was raised who just last week posted a pitch for a “multi-level marketing” (MLM) product on Facebook. Though I haven’t seen her for years, I was shocked and felt great sadness that she has bought into America’s huckster economy.

We all have them: Facebook friends, family members and acquaintances who constantly pitch useless scams online or try to sell products at family functions.  From Amway to Arbonne to Herbalife, it’s not just a scam, it’s also a symptom of diminished opportunity and growing economic fear. The American dream has morphed from building a stable career and climbing into the upper middle class into a contest for who can sell the largest amount of useless crap to the greatest number of suckers. As the middle class gets squeezed, ever more people will get caught up in the swindle.

When I was in my twenties, I let people steamroll me into some of these schemes. I’ve had friends offer to pay my initiation fee, just to get me in their “downline.” A friend once even put me in touch with a paid staff member at Amway to entice me to join. I was jaded, knowing well that Amway is a time and resource suck worthy of song, but I called the slick huckster nonetheless and listened to his 20-minute misinformation marathon. At the end, he said, “I’m proof that anyone can do it.” I had no idea about his background, so I asked him if he had formal training, like an MBA. He hesitated before he told me that of course he did.

A great businessman—educated or not—can always make money, by starting a business, working at a bank or opening a damn lemonade stand, and that’s a fine endeavor. However, there are also many less talented and unscrupulous people who can make money by fleecing old ladies, selling used cars or by pushing rip-off MLM schemes. Conning people out of their money is time-honored American tradition, just like the old-time medicine shows. But most people can’t or won’t make money like this, either lacking ability or being burdened by that pesky conscience; so most people who sign up end up losing money, time and, tragically, the respect of friends and family. My vast and varied exposure to MLM schemes came from those closest to me, and it’s an added insult that people are pressured to participate not based on value or good products, but on guilt and family obligation.

Even writing this, I know I’ll hear shrill anger from people about it, friends and strangers alike. These schemes become like a religion, despite the nonexistent record of success. We all know people, wide-eyed and frothing, who repeat these impossible claims of MLM riches even as the statistics show that over 90 percent of people lose money and drop out. Someone somewhere is convinced at this very moment that he or she has just the right recipe and drive to prove math itself wrong.

I come from the working class, and I’ve made missteps aplenty in my career and finances, so I can't and don’t hold mistakes against people, even those seduced by get-rich-quick schemes. The allure of these companies and the reason they still exist is because they don’t sell products, they sell dreams of fabulous wealth, owning a Mercedes and working from home three hours a week in your underpants. The sales pitches for MLM are never about selling products or building customers, the sales pitch to join is an aggressive, incessant repetition of one question:

Even though it’s total nonsense, it’s often the only “business opportunity” open to the middle and working classes. Yet MLM is only one tacky balloon in a parade of scammers whose sole business is harvesting dollars from the people who can least afford to lose them. I’d like to offer up Robert Kiyosaki of "Rich Dad, Poor Dad" fame. Kiyosaki is wealthy, but not from “smart investing.” He has sold millions of books and charges hundreds of dollars for seminars. A great many real entrepreneurs have found his advice simple or even damaging, but he doesn’t make money following his own advice; rather, he sells dreams to suckers.

I read Kiyosaki’s “seminal” work in the early 2000s, and I remember (to my chagrin) being wowed by it, as were many of my closest friends. His most repeated suggestion is for people to speculate on real estate, but we all saw how that turned out in the great 2008 housing implosion. I know no person who has ever made any money from his advice, but I know many people who lost life savings buying overpriced houses.

Perhaps, you might argue, I run with unlucky people. Maybe my personal circle is less capable, or filled with more losers than most, but I think the people I’ve known and the cities in which I’ve lived look just like the rest of America. Sadly, America seems to be leaning towards selling Amway to get by, and the worst part is that it takes just as much effort to fail at an MLM business as it does to do something productive. The biggest lie I hear repeated almost every day in this country—and every day on Fox News for sure—is that poor people are lazy. I’ve never worked as hard as I did for minimum wage, and I have watched many people work hard for nothing, chasing improbable schemes.

During the years I struggled up the income ladder, I gave many half-hearted lunges at opportunities aimed at lower-middle-class naïveté, even as those companies, products and sales pitches made my skin crawl. When you live paycheck to paycheck, you are always looking for a way out, a score to push you beyond subsistence living. Despite my own missteps, I achieved a solidly middle-class life some years ago. I have enough, so I don’t stress about money anymore. I have the breathing room to see both up and down the income scale, knowing I probably won’t get much higher  Even though I feel fine where I’m at, I’m still terrified that I might find myself poor again. Although I empathize with working-class people, I would rather get some awful disease than be poor again. Death before disenrollment from Costco.

For the last decade or so, I only have one piece of insight for my own children or anyone else who asks. The secret to success is to get a job and then keep a job.  An education is a big help, but hanging on to work is the only way I’ve witnessed a person pull him or herself out of poverty and into better circumstances. Yet even that advice sounds stupid to my own ears when I say it now. The economy is fragile and unforgiving. One layoff, bad career move or college failure can wipe out years of work and savings. I’ve seen it.

Instead of building up our country and each other, we scream and holler about “Obama phones” and food stamps.  We can’t stand that our neighbor might get a government break we don’t, and at the same time we manage to ignore the many predatory companies and businesses that fleece a large majority of the country to line their own pockets. We ignore them, because far from hating them, we want to join them. We want to be a shark.  We want to fleece our neighbor or flip that house so that we can provide for our own families or buy that luxury car. It’s as understandable as it is depressing. If we can’t even recognize the big, obvious con how can we ever hope to stop the financial sector from siphoning 40 percent of all corporate profits as handling fees? How can we ever rein in payday loan sharks? MLM is only the greasy tip of a much bigger scam that threatens to engulf America, and instead of seeing it for the evil it is, we instead want a piece of it.

The social contract is fractured and getting more so.  There’s also a growing debate about capitalism in America, but we’ve reduced the discussion into a partisan binary—debating tax cuts and military spending while our country lurches into something like feudalism.  We’re normalizing the noble-serf dichotomy, but rather than address what got us here, we put our hopes into selling the latest (worthless) nutritional supplement.  At the same time, we repeat a silent mantra that we’re just one lucky break from joining the aristocracy.

Those well into careers might be able to ride it out until retirement, but many others will never get started. Still others are going to be derailed by automation or globalization. Those that manage to stick it out face stagnating wages and an assault on retirement benefits. The difference between multilevel marketing and a pyramid scheme is measured in units of shamelessness, so let’s all see if we can rediscover our values and perhaps find our way back to something like dignity.  It’s time to stop investing in the ShamWow economy and give serious thought about what kind of society—and species—we really want to be.