Can I ever forgive the Josh Duggar in my life?

As I watch Jessa and Jill, I'm reminded of how long I stayed in denial about my own abuse, and how much it cost me 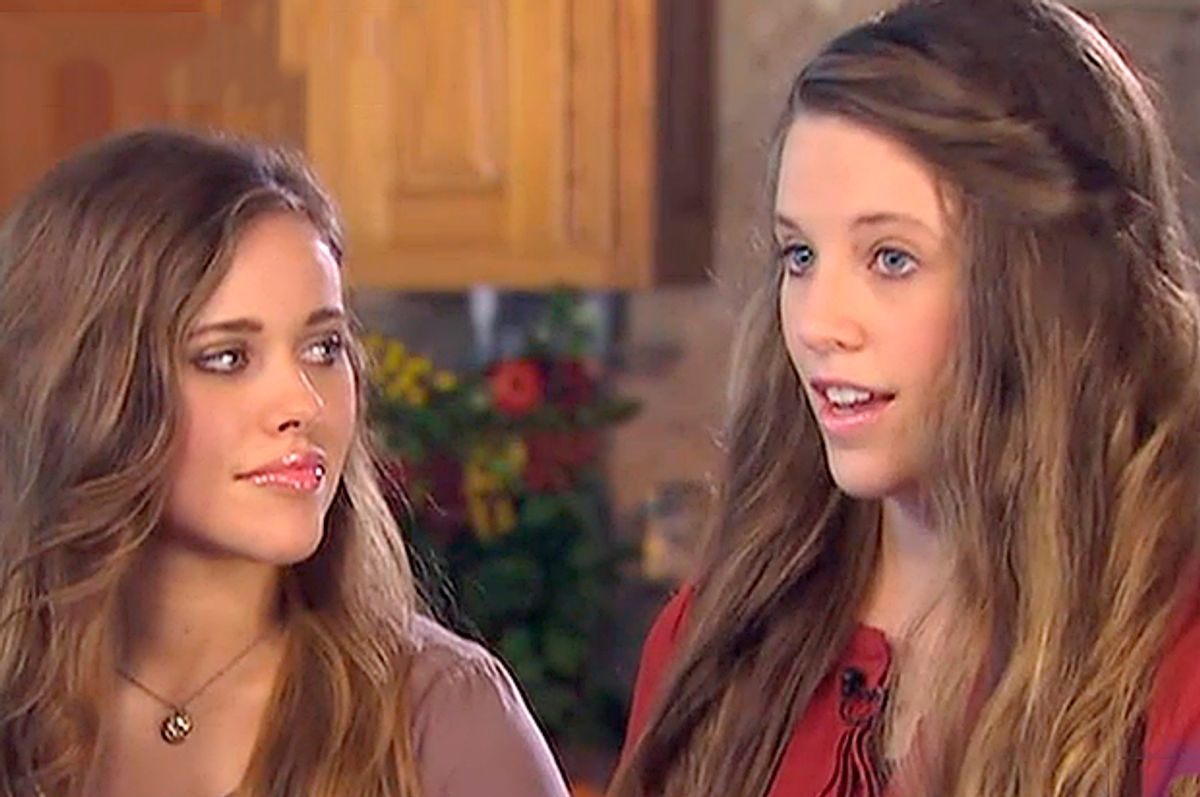 “Please forgive me,” he wept. It was 2:34 a.m. I woke to find my older brother holding my hand on his head. He rocked back and forth repeating these words. I froze and prayed for someone to come. After a moment my mother stirred and came down the hall. His pleas grew hysterical.

“What are you doing?” she asked.

“I need her forgiveness.”

“Let go of her hand and go back to bed.”

I had no words. I thought she’d blame me. She came, took my hand from his head and gently led him back to his room. That was 20 years ago.

When my mother asked why he needed forgiveness, he explained he had watched a Demi Moore movie. She played a stripper. In it her daughter or a child watches her strip. He confessed that he had watched me sleep as a child and stared at my underwear. Once.

The truth is so much darker.

But she’ll never believe it because she’s allowed his narrative to define the experience. “Why would he lie about that?” she asked me when I asserted that he had come into my room and touched me.

At times, in fundamentalist homes, where the first-born male child carries the responsibility of helping care for his younger siblings, it creates a permissive environment for him. An unspoken rule exists: He matters more. We were evangelical Christians. (Though, to be sure, a family doesn’t have to be fundamentalist for abuse to occur, and not all fundamentalist homes create abusers.) My brother felt entitled to my body and for years he took his fill at my bedside as I slept. It started with mere fondling and escalated to hands under pajamas and inside underwear. Because I was asleep his behavior merged with my dreams. I didn’t know where one began and the other ended. In my dreams he was a blond vampire in glasses with a butcher knife screaming my name. In the basement, where I’d run to get away from him, I’d find only men’s hands and their bare legs and suffocation.

Most nights I dreamt of blood and mangled body parts dripping from ceilings and lying in bathroom stalls. A therapist wondered if those were all the deaths I’d died.

My family relied on my forgiveness, and by giving it, I accepted his version of the truth. If I allowed the possibility that more happened, I was looking for attention, being dramatic, possibly even becoming a feminist who hated men. It’s taken me two decades and a tremendous amount of determination to truly remember what happened between my brother and me. It’s something that can only be done in the vacuum of adulthood and the crucible of rage. I cut off contact with my family for two years and curled up in my bed, with my two cats. I needed time to think and sleep. I needed a way to feel safe for the first time. I needed to be angry and feel the relief of not forgiving because forgiving was killing me.

This scandal with the Duggars has pushed it all to the surface again. I found Megyn Kelly’s interviews with Michelle, Jim Bob, Jill and Jessa disturbing. My conclusion was that confessing allowed Josh the opportunity to get in front of the story. Now, if the victims have another memory that signals the abuse was much worse than he claims, they will not be believed. They may not even believe themselves.

After my mother found out about the underwear incident, she told me to talk to my brother so he could ask for forgiveness, the implication being that of course I would. I refused, but in the ensuing months my mother was relentless. She’d tell me he was really taking it hard. He wouldn’t be OK, the family couldn’t heal until we spoke. I caved.

I have nothing more than a general impression of that nightmare conversation. It became quickly clear he wanted to talk to shut me up. He wanted to make sure I’d never tell our parents what had really gone on. He was afraid he’d lose their love. He then said I imagined it all, because I hated men. I don’t remember how I got off the phone.

Later I tried to tell my mother what really happened. She believed me for a short while, but then she didn’t. I assume now it’s because he was living there and I was living 1,500 miles away. He talked to her daily, laying the groundwork for her sympathy. He was always a master at that. I felt her shift away from me and so one day I brought up the abuse and she said, “I think you made this up. I would have known if this was going on in my house and I had no idea.”

And so began our legacy of pain. Sophie’s choice, as Megyn Kelly put it in her interview with Jim Bob and Michelle, had been made. My mother had chosen him.

Jessa insisted her parents did everything right. And maybe, like Jill and Jessa insisted in their interview with Kelly, nothing bad really did happen and they never carried any real shame for it because, as Jessa pointed out, Josh was very subtle about the inappropriate touching, even when the girls were awake, so it’s not like they were living in a house of horrors. She insisted it was so far in the past it was over. I remember my mother said the same thing. “He’s not hurting you anymore,” she’d said. “It’s all over.” As if that were some kind of comfort.

Nevertheless, as I watched the Duggar girls talk to Kelly, I decided to believe them. They must be allowed to characterize the experience for themselves, and if they agree to let their abuser define it in order to put it behind them, that’s their right. I’m a bit envious. Frankly, I’m tired of my truth. My body is heavy with it. I want to heave it up over the side of this ocean liner and dump it into the deep seas of amnesia. Watching Jill and Jessa, I long for that. I have no idea if there is more to their story. I simply wish for what they have, the ability to live lightly.

In a few days, the Duggars will recede into the background of popular culture, just another casualty in our fascination with sex abuse scandals, which has been going on as long as sex has been taboo. However, Jill, Jessa and the rest of Josh’s victims won’t be the same. They’ll talk about how God has brought them closer as a family, and closer to him. They’ll believe it, for the most part. But if Jill and Jessa are anything like me, then in the recesses of their psyches, a long smoldering fuse has sparked to life and there is no moving on. Abuse of any kind, particularly this kind, boomerangs back and the more we work to suppress it, the stronger it becomes. It must be integrated. So it’s not in the past. It never will be again. Because forgiveness is not a one-time act, not in these matters. It’s an ongoing battle. Otherwise, it’s not really forgiveness. It’s denial.