Chris Christie's epic screw-up: Exxon giveaway is even more of an environmental disaster than we thought 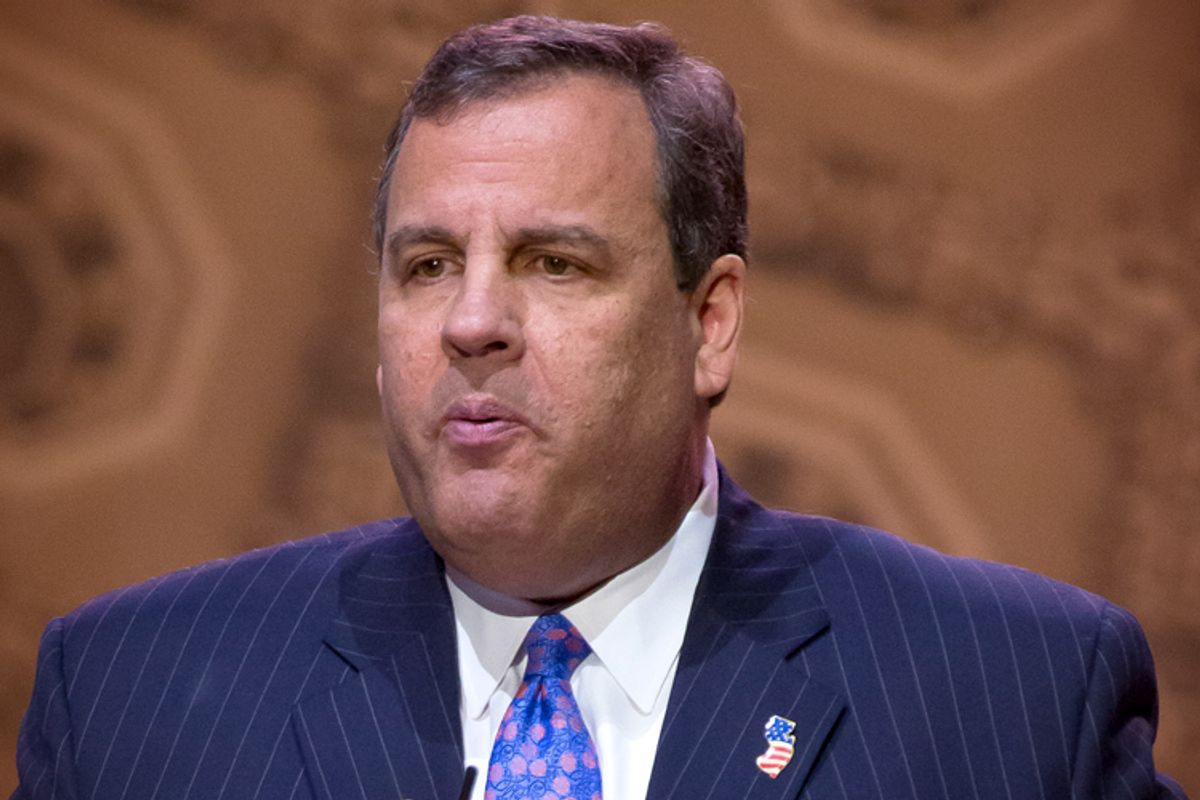 Over 40,000 New Jerseyans used a public comment period that just closed to call for the rejection of Christie’s proposed deal with Exxon to settle $8.9 billion in environmental damage claims going back a century for just $225 million, or less than three cents on the dollar. Now, the state’s Department of Environmental Protection has to respond to those comments and make a recommendation to the state judge overseeing the Exxon litigation.

Most observers expect that the state’s environmental agency will ultimately sign off on the deal and recommend the judge do the same. Should Superior Court Judge Michael Hogan approve it, opponents have recourse in the state’s Appellate Division.

For several years, long before Christie became governor, New Jersey aggressively litigated the case against the oil giant, winning a major victory in 2008, when a judge ruled that Exxon was indeed liable for the massive contamination at the sites of their Bayonne and Linden refineries that dates back to the founding of Standard Oil.

All that remained was for the judge to determine just how much Exxon should pay to compensate the public for the natural resource damage it had inflicted over several generations. (This is above and beyond what Exxon is obligated by law to spend to clean up the contamination.)

At a recent Assembly hearing, lifelong Bayonne resident Joseph Di Giorgio summed up the outrage in the chamber, recounting his childhood memories of just how badly the petrochemical industry and Exxon had contaminated his hometown.

"I remember when I was about 10 years old we were down behind Marist High School, where the Rutkowski Park is today. We decided we were going to make an underground fort, my friends and I. I was digging down in the ground and I struck oil. I ran home and told my parents we were rich. ‘I struck oil.’ It happened to be sludge,” says Di Giorgio. “I was digging up oil from the soil in the ground 45 years ago.

“I remember putting my fishing poll in the water and sitting there and never catching a fish because there were no fish in the water. The water was completely polluted. There was a zero oxygen level in the water, I was told by the EPA.”

To this day Exxon’s toxic stain on these sites it no longer operates endures. The New Jersey environmental experts on the litigation team, pre-Christie sellout, found that both sites had a toxic soup of 600 different organic contaminants including DDT, Benzene, Chloroform and chlorinated pesticides. On the Linden site investigators discovered a vast reservoir of tarry sludge that ranged from 4 feet to 15 feet deep. In other spots they identified an iridescent sheen oozing from the soil.

“Sludge lagoons occupy 45 acres of the (Linden) Bayway Refinery that once functioned as tidal marsh. These marshes have been destroyed by the lagoons use as a hazardous disposal facility,” according to court papers filed by the state in the Exxon litigation.

Back in 2008, when a judge ruled that Exxon was liable for the contamination in Bayonne and Linden he wrote: “It was estimated in 1977 that at least some seven million gallons of oil ranging in thickness from 7 to 17 feet, are contained in the soil and groundwater underlying a portion of the former Bayonne site alone.”  Former Judge Ross R. Anzaldi found that the level of hydrocarbon contamination was so high one creek was covered with “a gelatinous, oily emulsion overlying grey silt.”

This concept of natural resource damages due the public from private parties that degrade and despoil our environmental commons, our wetlands, coastlines, air and water, has its roots in Roman Law. This public trust doctrine was reiterated in the Magna Carta, and has been repeatedly reaffirmed by the U.S. Supreme Court.  For more than a century, big corporations like Exxon made vast fortunes by using wetlands and waterways as their toilet. Historically, these industrial practices predated our evolving ecological awareness that the wetlands and marshes they were poisoning were actually essential to sustain marine life and to provide shore line resiliency from storms and sea level rise.

Under the public trust doctrine it is up to the state to safeguard the environmental commons on behalf of the public. Historically in New Jersey, the state, through its Riparian Commission, regarded marshlands and wetlands as a threat to public health and so conveyed them to companies like Exxon. In retrospect, the state’s selloff and wholesale filling of these riparian lands in the late 19th and early 20th century was ecologically disastrous for the entire estuary that had once produced an oyster harvest that was the envy of the world.

In just a few hours Superstorm Sandy demonstrated along the New Jersey/New York industrial waterfront just what a heavy price we would pay in absence of the buffer protection of these wetlands and marshlands. While the news media depicts Sandy with file images of the destruction of Jersey Shore resort homes and seaside amusement parks, the storm also knocked out refineries, cargo handling facilities and sewage treatment plants that are concentrated in and around densely populated portions of the Port of New York and New Jersey.

Under the original $8.9 billion natural resource damage claim, Stratus Consulting, the state’s environmental experts, said that between its Bayonne and Bayway (Linden) sites Exxon had destroyed 1,700 acres of wetlands. The state’s experts estimated that, because of the current industrial activities on Exxon’s two sites, with $2.5 billion portion of the settlement it would be possible to only restore 25 acres of tidal wetlands at Bayonne and just 464 acres of tidal wetlands at the Linden site.

But the consultants concluded that the accumulated impact of Exxon’s pollution was so severe that additional compensation was in order and that it should be spent restoring the rest of the estuary. "Additional off-site replacement is necessary to compensate for the decades of harm at the two facilities and because portions of the refinery sites cannot be restored. Approximately 11,000 acres of intertidal salt marsh, 19,000 acres of palustrine meadow/forest, and 3,400 acres of upland meadow/forest must be replaced to compensate for this harm. The cost of this replacement is $6.4 billion,” the Stratus Consultant group determined.

Under Christie’s proposed Exxon deal, not only are the natural resource damage claims heavily discounted, but 80 percent of the paltry settlement will go to legal fees and the state’s general fund. That will leave just a meager $50 million, nowhere near the cost of the major marshland restoration on the scale initially envisioned in the state’s claims.

Even though the state had already convinced a judge several years ago that Exxon was liable for the contamination at Bayonne and Linden, in the fine print of the current deal the state now refers to the contamination as merely “alleged.” As a consequence, according to Democratic state Sen. Ray Lesniak, Exxon “has the opportunity to deduct 35 percent and 9 percent from it federal and state corporate business taxes reducing its payout to 1.4 cents on the dollar.”

The missed opportunity cost of not using the Exxon settlement to fund the ambitious wetland and tidal marsh restoration the state’s experts initially called for will be high. Such a major restoration would have gone a long way to protect the critical infrastructure on the working waterfront that handles massive quantities of highly hazardous materials on a daily basis and the residential neighborhoods nestled between them.

When the next Sandy hits it will be the people who live in these neighborhoods, in and around the former Exxon sites, who will bear the brunt of Christie’s decision to let Exxon off the hook. When Sandy’s wall of water inundated these neighborhoods it brought with it a toxic brew of contamination reanimated with the churning waters that came to rest into residential basements and backyards.

More than two years after Sandy some Ironbound residents in Newark are still grappling with the aftermath. “We still have residents we work with today facing the stages of recovery," says Michael Molina, who is the resiliency coordinator for the Ironbound Community Corporation. Now Molina says relief was so slow in coming to some residents whose homes were flooded they now find themselves on the verge of foreclosure even as they brace for a spike in required flood insurance premiums.

Molly Greenberg, also with ICC, says residents had to be their own first responders as they dealt with the aftermath of the toxic muck and mire Sandy left  behind, once the water receded.  For Ironbound the Exxon sellout will be the second time in just two years that a multimillion-dollar settlement to settle a massive environmental claim against polluters who contaminated the waterfront was redirected to the state treasury and not to address serious environmental concerns.

In 2014 the Christie administration took $140 million of a $190 million environmental settlement with Occidental Petroleum to resolve claims related to the manufacturing of the Vietnam War-era defoliant Agent Orange that resulted in some of the highest dioxin levels every recorded in marine life that called that Ironbound stretch of the Passaic River home.

The whole purpose of these settlements, says Greenberg, is “so that the communities that have been violated by these facilities, by these industries and these terrible practices, things that went unregulated for a long time,” get the “recovery they deserve.”

Today the Newark Bay and its major tributaries hosts, not just the bulk of the region’s port cargo handling facilities, but refineries, chemical plants, sewage treatment plants and some of the most toxic legacy Superfund sites in the nation.  In and around these facilities and hot spots close to one million people make their home and send their children to school in communities  along the Newark Bay bi-state waterfront. These were some of the places that Sandy pummeled.

Based on U.S. Census track data these communities are made up of working-class people of color with a substantial percentage of new immigrants that are mostly Spanish-speaking. These communities host heavy industry and are also at the heart of the region’s cargo handling choke point. As a consequence they bare the brunt of both point source and ambient air pollution. They live there because housing is relatively cheap.

According to public health data, just three of the counties in New Jersey on the Newark Bay complex account for a third of the hospitalizations for asthma in the state. According to the EPA data the neighborhoods around Newark Bay, in both New York and New Jersey, have historically higher incidence of cancers. Experts caution however that making any direct causal link between these public health data points and toxic hot spots is problematic.

When we see reporting about populations that are particularly vulnerable to the sea level rise and extreme weather events that come with global warming we invariably see images of 40 small island nations. For these folks the perils of climate change are no longer abstract. These impacts are clear and present dangers that have already manifested themselves in the form of the loss of their fresh water supply to salinity and the loss of their land mass to the ocean that threatens to eventually envelope them entirely.

No doubt the people that live along New Jersey and New York’s low-lying industrial waterfront are every bit as vulnerable. A just settlement from Exxon would  make them less so, and at the same time protect the nuts and bolts of a port upon which so much commerce depends.