Fox News is covering for the Duggars: With shifty language and half-truths, Fox chooses the side of a molester

It's one thing for Fox to shade the truth on politics. Their shading on behalf of a sexual molester? Indefensible 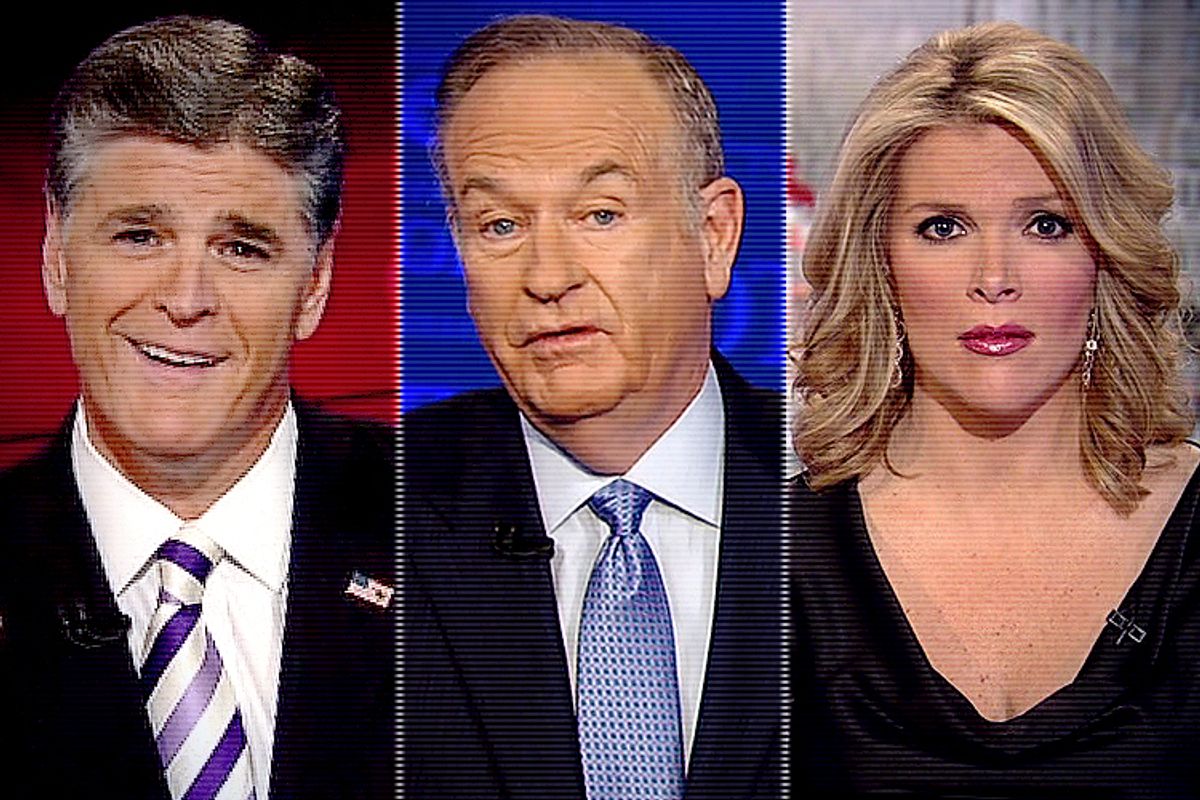 We now live in a nation where the conservative cable news network is spinning in support of a confessed child molester, as well as the people who tried to hide his actions. Fox News Channel has always been an egregious source for misinformation and GOP talking points. We all know this. It's also been a powerful backstop whenever a Republican candidate commits one of many unforced errors -- blurting out a ludicrous rape remark, or worse. However, in the past week, Fox News has crossed the zero-barrier between spinning for the GOP and into the realm of manufacturing phraseology and excuses for a Christian television family caught up in a sexual abuse scandal.

As predicted, Megyn Kelly's interviews with both Jim Bob and Michelle Duggar, as well as molestation victims Jill and Jessa Duggar, felt transparently crafted to help exonerate Josh Duggar and his parents. Friday night's interview with Jill and Jessa was particularly obvious. The first half was structured around soft-pedaling what Josh did to those five underage girls, while the second half was all about diverting attention in the direction of the media and away from the actual actions. Did they discuss topics and/or ground rules in advance? We may never know, but that's almost irrelevant in the face of the larger issue, which is that Fox News looks like it is actively working in support of a sex offender.

Fox News might occasionally drop in a word or two about the awfulness of what Josh did, but it's invariably sandwiched between stories about alleged religious persecution and media recklessness, both of which feature language that understates what really happened.

The most flagrant tell was how Kelly and other on-air hosts have adopted the Duggar euphemism for sexual abuse: "improper" or "inappropriate touching." It's the new "homicide bomber" -- Fox News Channel's shifty alternate term for "suicide bomber." Throughout the Bush years, we witnessed the entrenching of weasel language; the Healthy Forests Initiative or the Clear Skies Act, for example, each of which totally contradicted those titles in content and practice. And now, Fox News has employed this technique to whitewash a confessed sex offender.

Fox News has also followed Jim Bob's lead and instead of focusing on the developing story of the sexual abuse itself, the network has conveniently pivoted to covering the reporting and how terrible it is that the police reports were acquired by the press. Jill Duggar said Friday night that the reporting is "a thousand times worse" than the original crimes themselves, and Fox News has willingly taken up the cause of publicly shaming InTouch magazine and especially the former Springdale, Arkansas, police chief Kathy O'Kelley who Jim Bob said has a personal vendetta against his family.

Along those lines, Fox News appears to have concocted the Christian persecution story, generously feeding it to the Duggars on worldwide television. It's classic Fox News: characterize the largest religious and racial majority in the United States as the real victims. It coincides nicely with Republicans like Mike Huckabee and Sen. Ted Cruz, R-Texas, who are pushing for so-called "religious freedom" laws while circulating the conspiracy theory that there's a war against Christianity. When will The Man get his boot off the necks of white, suburban Christians?

The only reason why the Duggars' faith as well as their participation in the Quiverfull cult happens to be a feature of the story is strictly because they've spent so much of their capital proselytizing in the name of family values and, mainly, condemning the LGBT community. Simply put: It's the hypocrisy, stupid. It almost always is. The hypocrisy makes Josh's, Jim Bob's and Michelle's behavior especially horrendous. The sexual abuse itself is ugly and disgraceful, sure, but that they've been so active in campaigning against civil rights for LGBT citizens makes it that much more unforgivable. If the Duggars were true followers of Christ, they should have paid more attention to the moral of Christ's famous line: "He who is without sin, cast the first stone." The Duggars hurled many, many stones while covering up their own terrible sins, and they'll surely continue to do so.

And Fox News is there to distract us from this immorality, this hypocrisy. Instead, Megyn Kelly, Steve Doocy and others tell us that the Duggars are being persecuted by secular liberals who merely hate Christians. Nonsense. In the real world, the Duggars are under fire for being horrible people who have exploited their faith and their celebrity in the name of marginalizing American citizens simply because of who those citizens love, while simultaneously whitewashing a stupendously hideous crime. Fox News is now an accomplice in all of it. Let that sink in for a minute. Kelly's show and the broader network brand is now inextricably linked to the Duggars' molestation scandal. The television ringleader in the powerful conservative entertainment complex is actively injecting excuses for a child molester into the American debate. Conservatives throughout social media and elsewhere are following the Fox News lead.

Stepping back and looking at all of this in the bigger picture, Fox News has turned a crime that ought to have been universally reviled by everyone of all political affiliations into nothing more than a partisan shovel fight. It's difficult to tell whether Americans will ever again unify around an event or crisis. A sex offender and public figure who confessed to his crime, which included the incestuous fondling of a 5-year-old girl while she slept, ought to be condemned by both the left and the right.

But today, everything from child molestation to an overzealous white cop tackling a 14-year-old African-American girl, after she merely committed the non-crime of mouthing off while black, is a partisan issue. The crime and the hypocrisy should be abundantly clear to all observers. But it's not.

Frankly, if I were a conservative Christian, I'd be embarrassed and ashamed by the Duggars. I sure as hell wouldn't be trolling Twitter with Fox News talking points intended to exonerate or distract from what Josh Duggar and his parents did. This story marks a harrowing turning point in our discourse and let history record that Fox News led the way.