From the Duggars to the Bachelorettes, we've made our cynical TV beds — and this damning critique of our "reality" obsession couldn't come at a better time

"UnREAL," a scripted drama, nails our confused fascination with the bitter truth of reality television 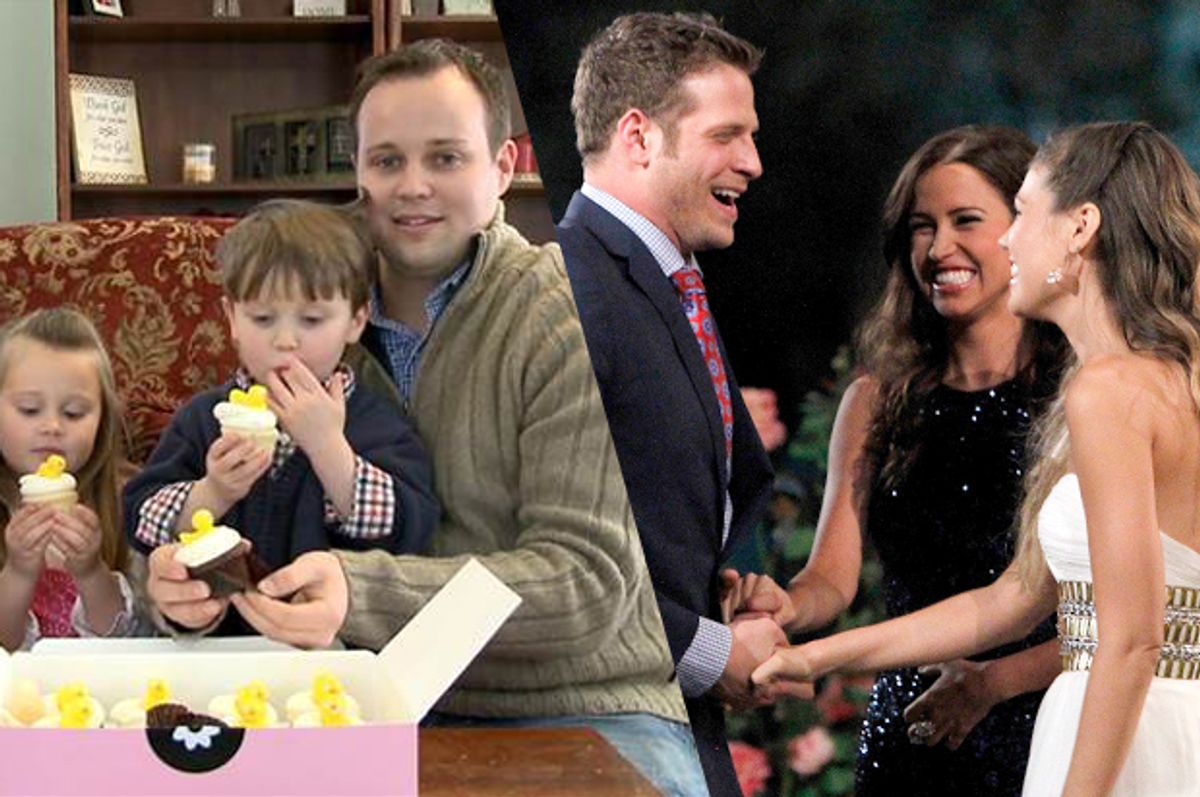 In “UnREAL,” the show is called “Everlasting.” Each contestant is given a diamond bracelet, and instead of limousines, they step out of horse-drawn carriages when they meet their blue-eyed suitor. There are no red roses, but there are dozens of carefully manicured young women in stilettos, flashing their teeth in dazzling smiles while pretending to drink flutes of champagne. And behind them, in front of them, running around them and encouraging them to smile—grungy, over-tired crew members, listening through their earpieces, shouting into walkie-talkies, rolling tape. It is basically “The Bachelor.” A few details have been blurred, but the cloying atmosphere of safe-for-TV dating, neatly packaged women, and sentimental mush is instantly recognizable.

Up until now, TV has mostly left cinema to explore the darker ramifications of unscripted television, choosing instead the satirical take of shows like “Burning Love,” “The Hotwives Of Orlando,” and numerous sketches on “Kroll Show.” With Lifetime’s new show “UnREAL,” there’s now a scripted drama that is peeling back the layers of reality television, with the viciousness and affection that can only come from an intimate perch. The show, which aired its second episode last night, is a biting, soapy dramedy about a very different kind of show—an unscripted dating competition that ends with engagement, one that is stunning, every season, for both its incredible artifice and its incredible success. The show’s pedigree is stellar: It comes from Marti Noxon, who made her bones working with Joss Whedon on “Buffy: The Vampire Slayer” and “Angel,” and Sarah Gertrude Shapiro, who worked on four early seasons of, you guessed it, “The Bachelor.” Shapiro likely provides the show’s details; Noxon probably provides its instantly likeable protagonists and the immediately immersive plot.

The result is an unexpectedly must-see show, on a network that is more likely to imitate “The Bachelor” than critique it. (Seriously, why didn’t HBO pick up this show?) “UnREAL” is refreshingly, brilliantly cynical—about Hollywood, about dating, about American audiences. The characters all work for a television show that creates a syrupy narrative out of sordid and gritty real life, and they do that by consciously fudging the distinction between truth and fiction. The contestants do occasionally act for their own benefit—feigning interest in vineyards or playing down their past sexual experience. But most of the time, they are responding authentically to the manipulation of their producers—producers who are plying them with liquor, whispering made-up rumors in their ears, coaching them on how to get more camera-time, and then splicing the footage into some kind of narrative arc. The best of reality TV, “UnREAL” observes, comes from something genuine pouring into the camera; but as it turns out, you can poke and prod authenticity in all kinds of ways.

As a result, a great deal of “UnREAL” is a kind of exposé, leaning on Shapiro’s probable expertise in the matter: Each outlandish act is just another example of the type of thing that is really going on behind the scenes. In the first four episodes available on Lifetime’s website, that includes clandestine blowjobs, secret bulimia, the producers discussing that a black girl will never be wife material in America’s eyes, a bachelor who is still sexting his ex-girlfriend, and a showrunner who yells into her walkie-talkie, “SLUTS GET CUT.” It is everything that the casual viewer might imagine was happening behind the scenes of a ridiculous dating show—everything, and more. Of course, “UnREAL” is scripted—not “real”—but by now the audience is so many layers of artifice and inauthenticity in that if anything, it’s an addition frisson of excitement. It’s real enough to feel real, even if it’s not real at all, and that’s all that really matters.

As frothy and fun as the cynicism is, “UnREAL” isn’t all snark. The show is highly aware of how tragic the proceedings of “Everlasting” are, even if the characters can’t always articulate it. And its vehicle for that is the show’s protagonist, Rachel Goldberg (Shiri Appleby), who is both a terrible person and the most likable person on the show. She’s the show’s star producer—the most expert manipulator, the most successful flatterer. A dropped remark from her can cause a contestant can go into a screaming frenzy by the pool or can bring out a heretofore unseen side of themselves to the waiting camera. But she can’t do it without costing herself a little bit of her humanity. The struggle of being this person plagues her in every scene—from our introduction to her, lying on the floor of a limousine wearing a “THIS IS WHAT A FEMINIST LOOKS LIKE” t-shirt, through her reprehensible act at the end of last night’s episode, where she edits the day’s footage to make a raging psychopath out of a woman mourning her dead father.

In Appleby’s hands, Rachel is confused but capable, struggling but also achieving, tired but working (yeah). The script steers her clear of any obvious archetypes—in clear contrast to the women of “Everlasting,” who occupy any number of convenient archetypes: mother, maid, virgin, whore. Noxon’s touch is clear here, in the delivery of a female character who is thoroughly lived-in—see also her other recent creation, “Girlfriends’ Guide To Divorce.” And not just one female character, either—Rachel’s boss Quinn (Constance Zimmer, in a truly magnificent turn) is more than just some Hollywood ball-buster, even though she can be loud, tough, and heartless; much of the show is devoted to the complicated relationship somewhere between mentorship and exploitation with the two. “UnREAL”’s insistence on complicating the female characters also stretches to the cast of “Everlasting,” who are all much more than they seem to be on TV. Through the simple act of fleshing out its characters—of good storytelling—“UnREAL” is a damning critique of reality television.

The biggest and best critique of the medium paradoxically termed “reality television” is probably Suzanne Collins’ “The Hunger Games,” a slim young-adult novel that turned into a billion-dollar franchise. Much of the story’s power comes from the fact that it is frighteningly simple: A TV show is made out of young people competing to the death. Survival is not just about outliving your competitors—it’s about knowing what the camera wants. And though being chosen for the game is a precarious and almost definitely lethal venture, it also is a source of enormous power—one where one girl can became a symbol of rebellion, entirely unwittingly, simply because she was doing her best to survive.

As readers of the series will recall, in the last book, “Mockingjay,” a Hamlet-esque question becomes a refrain: “Real or not real?” The questions are mostly for a character that has been tortured and brainwashed, and can’t remember where all of his memories came from. But the mental manipulation preys on a darker fear he already had, which is that what he thought he was experiencing in the arena might not have really happened. Katniss, the book’s protagonist, is hyper-aware that she needs to create a narrative to survive—and so creates a romance with fellow contestant Peeta. She knows it’s for the cameras. He doesn’t. And though there is much more to their relationship, the lingering fear remains—was it an act, or did Katniss really love him back? If it starts out manufactured, does that make it less authentic? Is it real, or not real?

It’s this confusion between truth and half-truth and lie and fiction that Rachel in “UnREAL” navigates on a regular basis—even the title of the show nods to the humor and difficulty in trying to nail down truth in this world. And though “The Hunger Games” is decidedly darker than “UnREAL,” Rachel finds herself asking that same question. In the third episode, Rachel sits through an argument with her mother that she has to later tell herself isn’t real; in the fourth episode, she watches footage of herself, filmed by her ex-boyfriend, in an attempt to ascertain the truth of her own feelings. Her own private life, due to an on-air meltdown and a vengeful roommate, is publicly known in her workplace. She isn’t a contestant, but she is just as much at the mercy of “Everlasting.”

“UnREAL”’s potential is in Rachel’s own reckoning with herself, as she wonders how much the game she plays works on herself, especially after she makes a little more headway than expected with “Everlasting”’s suitor this season, Adam Cromwell (Freddie Stroma). Perhaps there’s nothing wrong with hoodwinking people who have signed away their rights in order to get on TV for a few minutes and pretend to find true love. But alongside the constant desire for better ratings, people do want authenticity and connection and even, as Chris Soules said so vainly during this past season of “The Bachelor,” someone to trust. Rachel has to find some way to answer the question, “Real or not real?” And that is compelling.