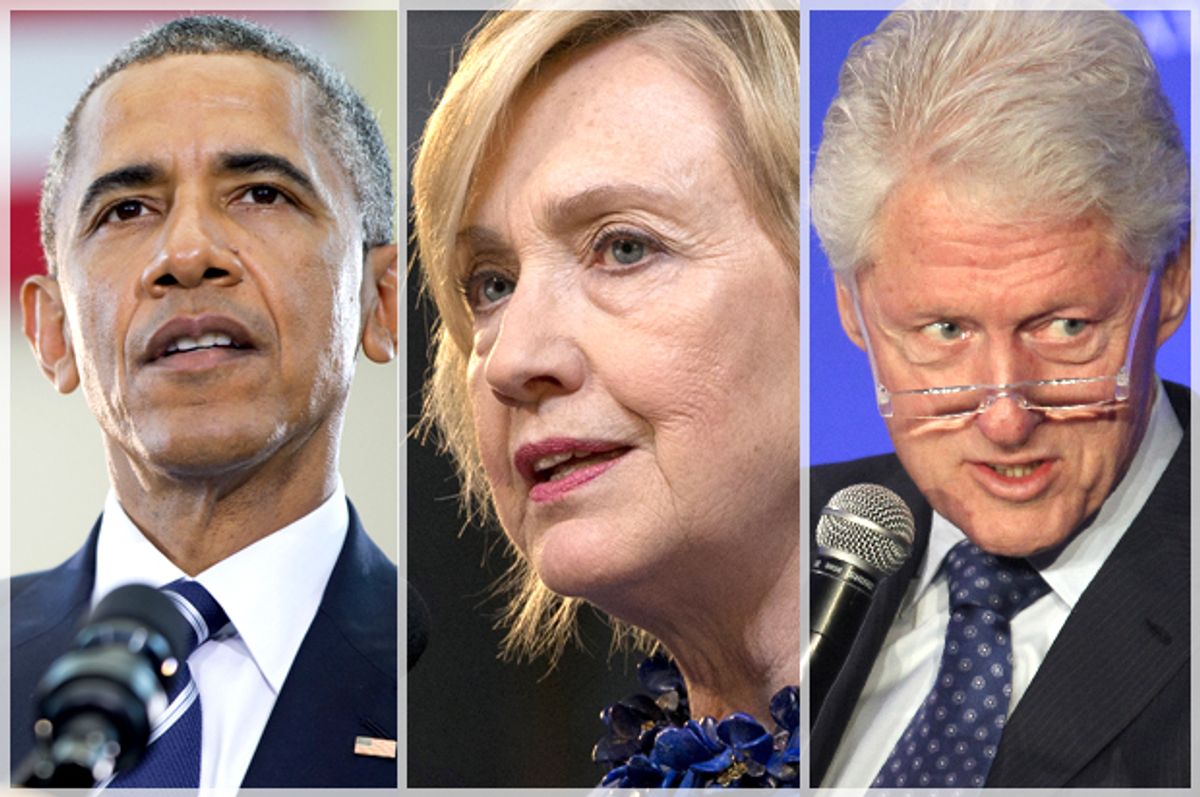 (Democratic strategist and smart guy Ed Kilgore asked me to join his second white working class roundtable to discuss Stan Greenberg’s latest, "The Average Joe proviso: Surprising numbers of white working-class voters will support the Democratic agenda—if Democrats promise to reform the government that would carry it out."  I've adapted my piece, currently running in the Washington Monthly, to reflect recent news. You can read the whole roundtable, with contributions from Ruy Teixiera, Karen Nussbaum, Andrew Levison, John Judis and others, published at the Democratic Strategist, here.)

More than two decades after he helped us understand so-called “Reagan Democrats” back in the Bill Clinton years, Stan Greenberg continues to mine the thinking of the elusive (for Democrats) white working class voter as we head into what may be the Hillary Clinton years. "The Average Joe proviso" offers intriguing clues about how Democrats can win key blocs of working class whites, most notably women, and particularly unmarried women. It’s an important read, in the wake of a New York Times piece that worried Clinton was abandoning her husband’s pitch to working class whites and following Barack Obama’s “far narrower path to the presidency.” (I debunked the ludicrous notion of that path being “narrower” here.)

Even after all this time -- after eight years of economic growth under Clinton, and almost two terms of recovery under President Obama -- cynicism about government continues to make the white working class skeptical of Democrats, who are perceived as the party of government. Back in the ‘80s, Reagan Democrats left their party because they explicitly identified “government” as the province of minorities who benefited at their expense, abetted by Democrats. Sadly, a sizable subset of white working class voters believe the same thing today, and those whose views are driven by racial animus are probably beyond the reach of Democrats, Greenberg agrees.

But for many of these voters – I so wanted to write “most,” but I don’t think any research, including Greenberg’s, lets us make that case -- distrust of government isn’t about race. It comes from the perception (correct, in my view) that the rules have been rigged by the rich, and that a bloated and unresponsive government is controlled by the wealthy. White working class women and unmarried white women are the groups most likely to feel this way – and it’s Greenberg’s project to show how Democrats can craft a message that reassures these voters that they will reform and streamline government, not merely expand it.

It makes sense. Polling consistently shows that white non-college voters are the group that’s the least optimistic about the future. And correctly or not, they don’t see government helping them. In Democracy Corps polling, white working class voters are also the most likely to believe that big banks were the primary beneficiaries of the 2009 stimulus: 50 percent said the banks benefited a lot, more than eight times the number of middle class folks who said that. Only one in five said the Economic Recovery Act helped people like them.

But it’s the women among them, especially unmarried women, who are most pessimistic about their chances of getting ahead, and most convinced the rules are rigged for the wealthy. These pessimistic, downscale white women, Greenberg’s research found, need a promise to “streamline” government, make it more efficient, and lessen the power of money in politics before they’ll listen to Democrats pitch an agenda to use government to improve their lives.

Greenberg acknowledges up front my first twinge of skepticism about his pitch: prior research that’s found “process concerns” like campaign finance reform, or getting money out of politics, are widely shared, but they don’t ultimately drive votes. He shows how his work, along with research by Page Gardner’s Women’s Voices Women’s Vote Action Fund, and David Donnelly’s Every Voice, found that white working class voters, especially women, were receptive to Democratic priorities – expanding and strengthening Social Security and Medicare, investing in infrastructure, implementing family-friendly policies like paid leave, and efforts to insure equal pay for women. But they were more enthusiastic when a pitch for those programs was preceded by messaging that committed to reform politics and government.

He’s also up against Democrats who argue that the party should stop mooning after its lost white working class base. After all, Obama won just over a third of white non-college voters in 2012, but he soundly defeated Mitt Romney anyway. Democrats are up against a desperate Republican Party that sees those voters as its lifeboat as it fights a perilous demographic tide; Ann Coulter just said Republicans would be committing "electoral suicide" if they worked on anything that didn't "drive up the white vote." Of course, they're committing electoral suicide anyway, as the country becomes less and less white, and the GOP stays more than 90 percent white. Democrats should just let them have (most of) the white vote, this argument goes, and mobilize the ever-expanding Obama coalition.

Those arguments ignore the paradox of Obama’s success. Yes, the president, and maybe future Democrats, had the capacity to get to 270 electoral votes (and well beyond) and win the White House despite doing poorly with white voters, and the white working class in particular. And yes, his or her coat tails often bring along Democratic House members and senators in those presidential election years, and even some governors. But every two years, in between high-turnout presidential elections, Democrats get creamed in the midterms, at the congressional level and in statehouses as well, when the older, whiter GOP base reliably votes and too much of the Democratic base does not. Their candidates, and their voters too, suffer from this structural weakness. Republicans’ success in winning statehouses, and controlling the redistricting process, then compounds that structural advantage; gerrymandered districts could keep the House out of reach for Democrats through 2020. Cutting the GOP’s edge with some subgroups of white working class voters seems important – and Greenberg argues, it’s possible.

I absolutely agree. And yet, in the real world, arguments to focus on white working class voters are often heard as a call to lessen reliance on the “rising American electorate,” also known as “the Obama coalition”: African Americans, Latinos, Asians, millennials and unmarried women. I’ve always rejected a zero-sum approach to these questions, as though the only way to reach white working class voters involved policies that would alienate non-whites. (That may be true, as Greenberg acknowledges, when it comes to southern working class whites).

Still, there’s a finite amount of time, money and energy in the world of politics, and telling candidates, donors or foundations to devote resources to these as yet unreliable Democratic voters can be a tough sell in the world of politics. At one roundtable I attended after the 2012 election, there was candor about the difficulty of getting resources even to study approaches to reaching the white working class, since it would potentially shave off money from more promising projects mobilizing African Americans, Latinos, women or millennials.

It certainly looks like Hillary Clinton’s campaign has decided that it’s smarter to focus on consolidating the Obama coalition than try to reassemble the Bill Clinton coalition of minorities plus downscale whites. President Clinton’s moves on crime and welfare reform, combined with his infamous “Sister Souljah” moment, were meant to inform white working class voters, including in the South, that he’d heard their concerns, and his party wasn’t captive to minorities. To be fair, Clinton's policies also reflected sincere and widely shared concerns about rising crime and increasing welfare dependency, and about the isolation of the poor in pockets of concentrated poverty impervious to social change efforts.

While Hillary Clinton’s recent policy stands on mass incarceration, immigration reform and voting rights certainly reflect her genuine political beliefs as well as changing times, they’re also evidence that she’ll focus on the issues most pressing to African American and Latino voters, without worrying about traditional white working class concerns about crime, immigrants or the power of so-called “minorities.”

But that silly New York Times piece aside, it’s clear to me that Clinton’s team is clearly focused on subsets of white working class voters, particularly unmarried women. When I heard Clinton say she’d consider the pursuit of a constitutional amendment to overturn Citizens United, my immediate thought was: she’s read this Greenberg piece! I was also impressed by the way she wove declining life expectancy among working class white women into her important speech calling for an end to the era of mass incarceration. Her campaign believes she has enormous potential to win the support of white unmarried women, senior officials told me recently. Obama won them by 20 points in 2008; his edge dropped to four points in 2012, but he still carried them; it’s reasonable to believe Clinton could restore the 2008 margin, or possibly improve on it.

I’m agnostic about Greenberg’s particular approach: meaning, I don’t know enough to say whether he’s right that a good-government, streamline-bureaucracy, and get-big-money-out-of-politics argument will work.  But he offers Democrats an intriguing way to compete for white working class voters – especially women – without compromising their values, or playing on the edges of indulging racial animus. And intuitively, I think it’s probably correct: yes, Republicans worked hard to convince white working class voters that Democrats were giving their hard earned money to minorities. But those voters aren’t wrong to observe that much of their former party became much more focused on winning over the wealthy then improving their lives.

My personal bias is that a clean up government pitch should be combined with a promise to rein in the power of Wall Street. I’ve always hung onto a data point from 2008 and 2010: In the Obama-McCain race, a majority of voters in CNN exit polls who blamed Wall Street for the economy’s crash voted for Democrats; in the 2010 midterms, they went Republican, believing Obama hadn’t done enough to punish the banks or help their victims. The good news is, in 2016, Democratic primary voters will hear from at least two candidates, Sen. Bernie Sanders and former Maryland Gov. Martin O'Malley, making that case strongly.

Still, I don’t expect any presidential campaign to make this its major focus; again, the nominee’s job is to get to 270 electoral votes. But getting to 270 is made easier when Democrats can count on swing states like Ohio, Wisconsin and Michigan, which are heavy on white working class voters, and where Obama did better with those voters than he did in the rest of the country in 2012. Greenberg insists that outside the South and rural America, Democrats can compete for working class whites, especially women, with a pitch that plays to what should be the party’s core values, and won’t alienate other racial groups. There’s no downside to trying.