Jon Stewart rips GOP "cattle-call panderthon": "Marco Rubio is the only candidate not pandering the sh*t out of this thing" 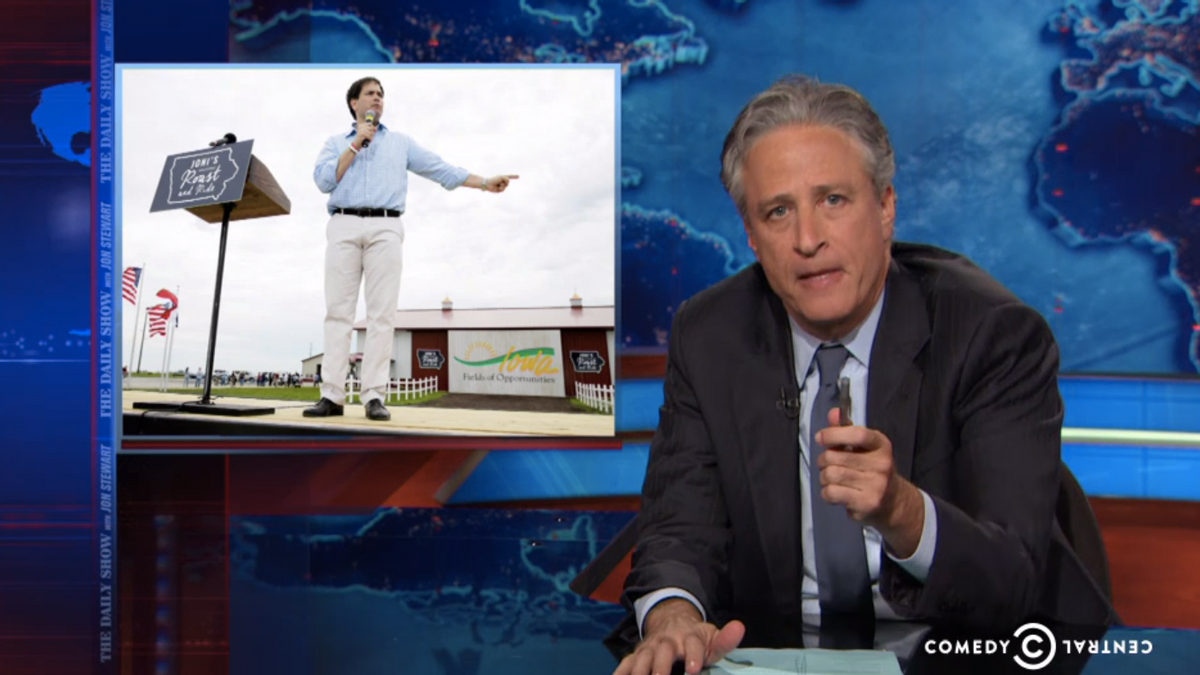 GOP presidential hopefuls flocked to Iowa last weekend in hopes of winning over the hearts — and votes — of everyday Iowans at the annual "Roast and Ride," an event hosted by Iowa Senator Joni Ernst. Some thought the best way to do so would be to arrive in head-to-toe Harley Davidson gear and preach pro-farming messages (looking at you, Scott Walker). Others, like Marco Rubio, said "suck it" and refused to shape their message to please the audience.

Jon Stewart took a look at some clips of the desperate Iowa pandering from the weekend on Monday night's "Daily Show," and was given some pause when he came to Rubio, the Florida senator who arrived at the event sporting J-Crew chic ("J-Crubio"), with a button-up and "relaxed fit motherfucking chinos."

"Marco Rubio is the only candidate not pandering the shit out of this thing," Stewart said. "'Yea, I don't like motorcycles. Or pigs. And corn can suck it too! Deep fry that and shove it up your John Deer-riding asses, you Iowa fucks! Rubio 2016.'"

Stewart then explained that this is not the only instance of Rubio "defying convention." The "Daily Show" host rolled a clip of Rubio -- noted Wu-Tang Clan lover -- in a recent Fox News interview, being pressed to answer which Wu-Tang member was his favorite. Rubio deflected the question, saying "that's early '90s stuff!"

"You're a fan and you can't name one member?" Stewart said. "There's hundreds of them. Wu-Tang is the only group of people bigger than the field of Republican presidential candidates."