Can you name more members of the Wu-Tang Clan than so-called fan Rubio? Most definitely 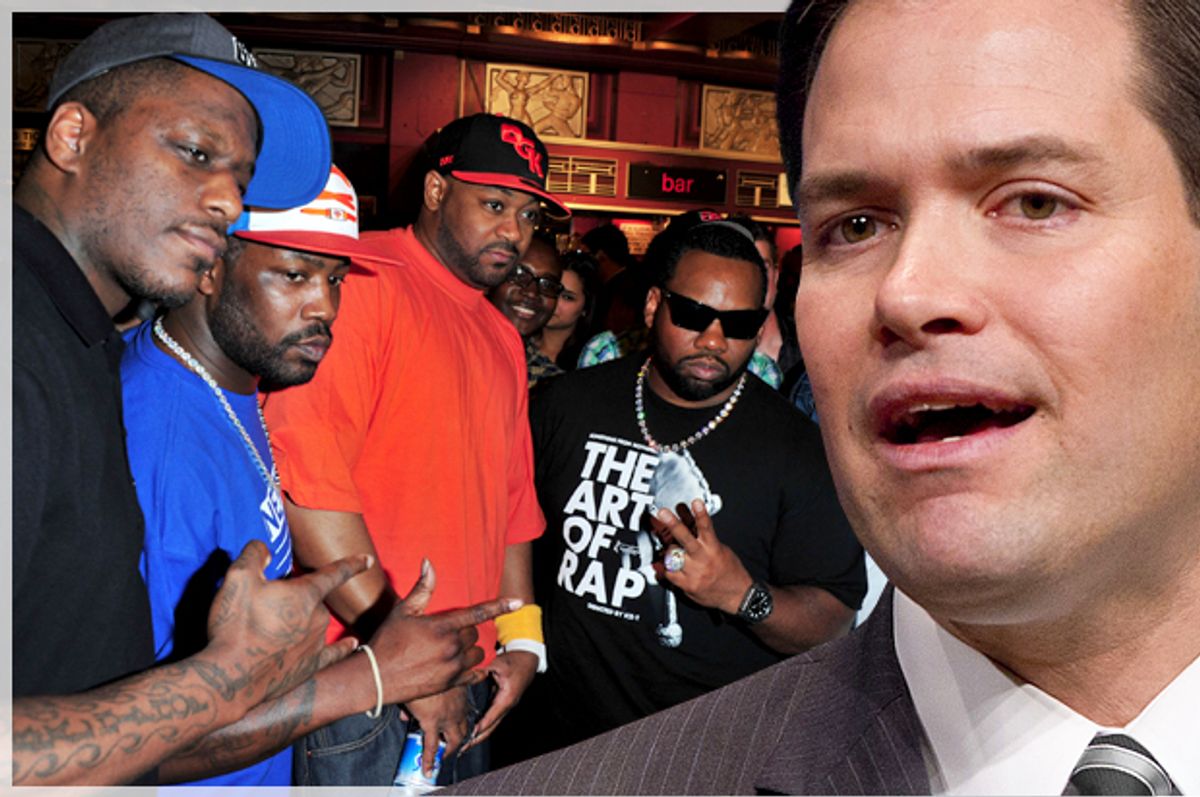 Marco Rubio, you have to quit talking about hip hop. I’m sure that flexing like you know rap may work at Young Republican gatherings and places like that, because they’re not cool either. But you’re running for president now, and that means the rest of us are listening to what you say. And you must stop talking about hip hop.

Sen. Rubio played himself once again last week on Fox News, when a host of “Outnumbered” tossed him a gimme: Since you say you love the Wu-Tang Clan, who is your favorite member?

Where’s that tiny, tiny bottle of water when you need it? Think, Marco, think.

Stumped. Couldn’t name a single one.

If it’s embarrassing to be stumped on your hip hop knowledge when you profess to be a fan, what sort of irrevocable disgrace is it when it happens on Fox News, the precise opposite of BET?

Just say something, name someone. Who's going to check you if you go with Ghostface? Is Steve Doocy going to charge out from backstage and challenge you with the merits of Method Man? Is the septuagenarian audience going to scream at the television about Inspectah Deck’s verse on "Triumph"? You could probably just string some random syllables together and everyone would be like, “Wow, this young Rubio fella might be the way we attract the youths to our ideology of oligarchic rule through appeal to puritanical morality and racism.”

But he couldn’t even name a single member, and what slim remaining concern I have for the Florida senator brought a sort of empathic flashback to Sarah Palin: It was the first real damage done to the McCain-Palin ticket in 2008 when Katie Couric asked the vice presidential candidate what newspapers and magazines she read. She infamously couldn't name anything. Except Palin had never told us that she could read. Rubio proudly announces his love for Wu-Tang, and he can’t name a single, let alone his favorite, member of the greatest rap group to ever share the mic. Every fan has a favorite member. That's a rule.

Um, can you pick a favorite disciple of Jesus? I bet you can, even if you just pick one of the non-Judas ones at random. Because that was, like, the early 20s. The OG 20s. That’s no kind of excuse to say it was way back in 1994.

I've written previously about how Rubio played himself when he tried to stunt with his 2Pac fandom. But this is even worse. This moment, along with the mounting others, reveal how cynical the Rubio campaign is being, with senior advisors consciously deploying the candidate’s alleged rap fandom to distinguish Rubio from the ever-growing GOP field and gain cred and cachet with young voters.

The campaign may even be delusional enough to pretend that this strategy might attract black voters to Rubio. Sen. Rand Paul, freshman senate candidate on the young end of the GOP field, is also courting the youth vote, and the libertarian-ish candidate is explicitly reaching out to black voters, as well.

But while Paul’s efforts to woo minority voters is consistent with his libertarian principles (i.e., an ideological aversion to the drug war and a police/carceral state), Rubio’s tack is simply appropriative. At a time when the hip hop culture’s defenders are decrying the appropriation of black music by white entertainers (e.g., Iggy Azalea, Macklemore, and others), Rubio is doing precisely the same thing: using black culture to enrich himself and not giving two shits about black people.

Rubio is the Iggy Azalea of politicians. Azalea is an Australian white woman who raps with an affected Southern black accent. Azalea’s Twitter nemesis, Harlem rapper Azealia Banks, has done well in problematizing the Aussie rapper’s convenient donning of black culture when fun and lucrative, while retreating to white privilege and unconcerned comfort when the going gets rough for black Americans (which is every day).

Banks and others point out how these white beneficiaries of black culture—especially Iggy Azalea—were notably mum and missing when the cycle of rebellions against police violence erupted after the killing of Michael Brown in Ferguson. Banks took to Twitter on the day Eric Garner’s killers were acquitted to assail Azalea and other fair-skinned fair-weather friends of black America.

But what Rubio is doing is vastly worse than Iggy Azalea’s playacting. Rubio’s domestic policy goals, were his hip and youthful persona to get him into the White House, are reheated Reaganism: Grover Norquist-endorsed tax cuts, crypto-racist cuts in social spending and a balanced budget amendment, insanely unnecessary military spending—you know, what all the rappers posit as the way forward. More Reaganism, and rappers love Reagan.

Rubio is at best a very white fan of hip hop, which is fine. No one expects you to be Elliot Wilson or Ebro. Rubio’s cultivated cul-de-sac tastes. But if you’re out here trying to profit off your knowledge of hip hop (which is what Rubio is doing, let’s not get it twisted), and you say that “the only guy that speaks at any sort of depth is, in my mind, Eminem,” expect folks to pull your card. Oh, a white guy is the pinnacle of expression of a black musical form? That’s where we find “depth,” not in the post-industrial black experience under a regime of state violence but in a white guy who raps most often about drugs and the various ways he can imagine killing his wife?

Rubio does love hip hop, no doubt. It gives him youthful feels, but apparent decades of listening has done little to foster an allegiance to the people and the culture that gave him the soundtrack to the last 20 years of his life. Marco, we need you to sit down and kill the hip hop talk. It only gets worse next time you’re out here fronting.