The Republican presidential contender said he overspent to buy his family a better life. So do millions of others 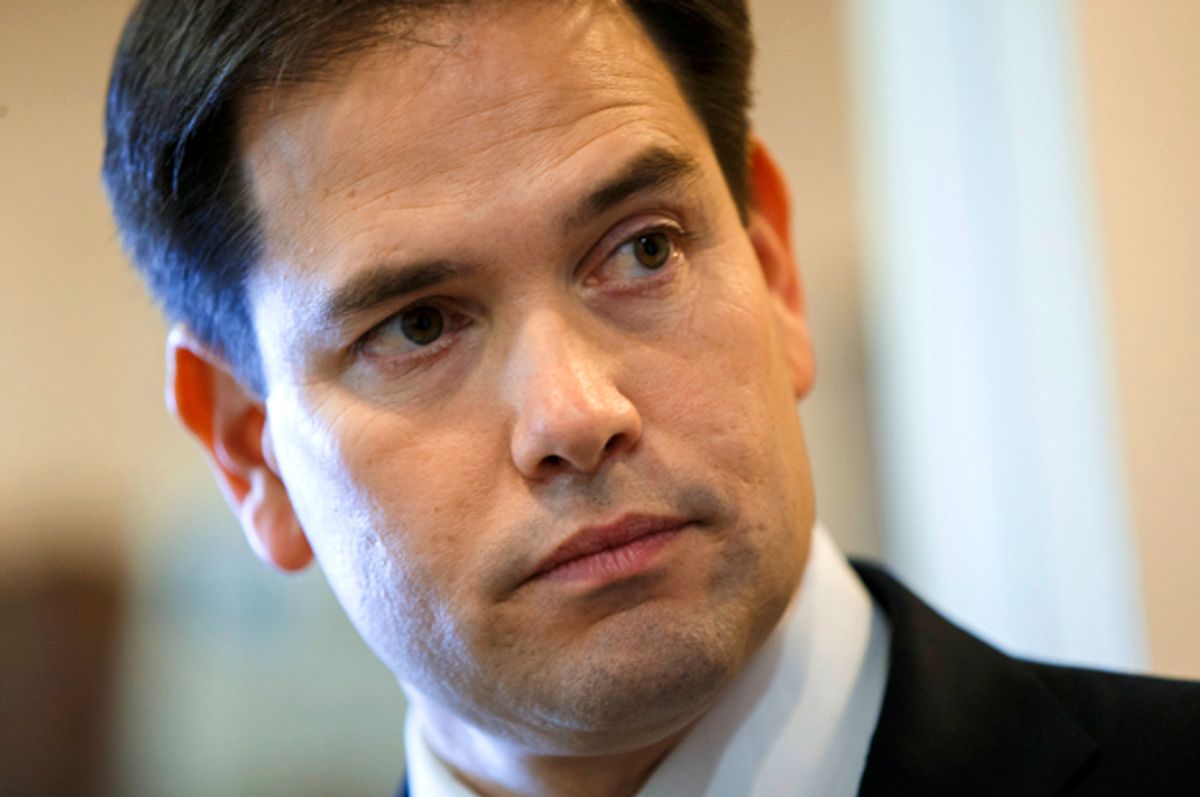 According to a report published Tuesday by the New York Times, Marco Rubio is terrible with money. The Florida Republican appears to have struggled to manage his finances during times of famine -- straining under the weight of student loans and a mortgage -- and times of feast -- an $800,000 book deal that he used, in part, to buy a lavish boat. His inability to keep track of the comings and goings of his money also led him to use the credit card provided to him by the Republican Party of Florida to do things like pave his house and cover travel expenses to a family reunion.

But at the same time [he said he would be using the book advance to pay down debts], he splurged on an extravagant purchase: $80,000 for a luxury speedboat, state records show. At the time, Mr. Rubio confided to a friend that it was a potentially inadvisable outlay that he could not resist. The 24-foot boat, he said, fulfilled a dream. [...]

Other moves seemed simply unwise: A few weeks ago, he disclosed that he had liquidated a $68,000 retirement account, a move that is widely discouraged by financial experts and which probably cost him about $24,000 in taxes and penalties.

In the past week, he suffered a new loss when he sold his second home in Florida’s capital, Tallahassee, for $18,000 less than he and a friend paid for it a decade ago. The house had previously faced foreclosure after Mr. Rubio and his friend failed to make mortgage payments for five months.

These were not isolated incidents. A review of the Rubio family’s finances — including many new documents — reveals a series of decisions over the past 15 years that experts called imprudent: significant debts; a penchant to spend heavily on luxury items like the boat and the lease of a $50,000 2015 Audi Q7; a strikingly low savings rate, even when Mr. Rubio was earning large sums; and inattentive accounting that led to years of unpaid local government fees.

Put a pin in the whole inappropriate use of his party's credit card (expenses he said he repaid) and Rubio's debts (and his shit financial judgment) make him kind of normal. Rubio's debts are larger than what many Americans are struggling with -- the average American has $15,000 in credit card debt and $30,000 in student loan debt -- but they're debts all the same.

Rubio's explanation for his financial decisions is also kind of relatable.

"Like most Americans, I know what it’s like for money to be a limited resource and to have to manage it accordingly," Rubio said in a statement to the Times. “Our primary financial motivation over the last 15 years has not been to become wealthy. It has been to provide for our children a happy upbringing and the chance at a great future.”

You might think that Rubio's own experience with debt and student loans would shape the kind of policies he supports. But you would be wrong.

Here's a quick rundown of Rubio's voting record on families who are also doing their best to give their children a happy upbringing and the chance at a great future:

Voted to block the Bank on Students Emergency Loan Refinancing Act, a proposal to let 25 million people to refinance their loans at a lower rate.

Voted earlier this year to pass a budget that would eliminate guaranteed funding for Pell Grants, a need-based program for low-income students.

That same budget freezes taxes while cutting domestic spending on food and housing assistance programs and sets up a path to repealing the Affordable Care Act.

Rubio's team called the Times report an "attack" on the candidate because "he could not afford to pay for college" and said the paper "arrogantly describ[ed] his student loan debt as ‘a deep financial hole of his own making."

It can't feel good to have your financial laundry aired, but his tone of righteous indignation would be easier to accept if his policies didn't cement millions of Americans living on far less into their own financial holes.