After this week's tragedy, even the most loyal fans of "Stannis the Mannis" may have trouble sticking with him 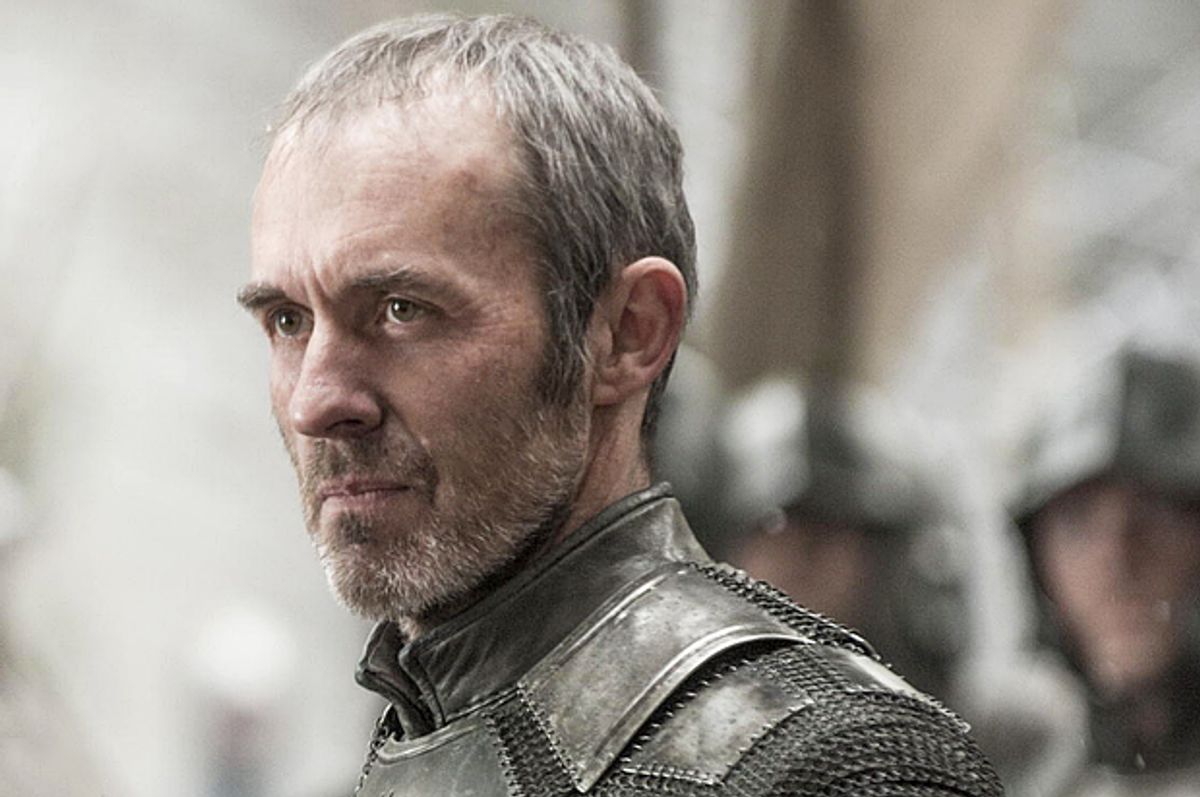 Note: The following piece refers solely to the events of HBO's "Game of Thrones." I have not read the books and do not plan to.

I have an apology to make. A few weeks ago, I wrote an article defending someone I felt was a chronically under-appreciated character in the "Game of Thrones" TV universe: Stannis “The Mannis” Baratheon, would-be king of the Andals and the First Men and, in my opinion, actually a pretty cool dude! Sure, Tyrion and Daenerys are the flashy characters who get all the love, but Stannis – a besieged underdog, a competent leader, a loving father (uh... my bad) – seemed to be getting short shrift for all the dogged hard work he has been doing since the show began.

Well, I have now had a day to process Sunday’s events, in which Stannis, prompted by religious freak Melisandre, took his daughter Shireen – an emblem, as our recapper Libby Hill writes, of "all things good and loyal and sweet" in the show -- and burned her alive at the stake while she sobbed and screamed his name. It was one of the show’s most cruel and heart-wrenching scenes, in a show that wantonly murders adorable doggies in cold blood (RIP, Lady the Direwolf). Suffice to say, this was not a good fatherly move, nor, might I add, is it something a cool dude would do. Or as Joel Johnson aptly put it, in a piece that I am choosing to read as an entirely earnest take: "Opinion: Stannis Baratheon is NOT a Good Dad."

So yeah, sorry to be a flip-flopper (Stannis, BTW, not a flip-flopper, although the moment his only child was being burnt at the stake might have been a good time to start ‘floppin) but I officially change my mind. Guys – Stannis is not The Mannis, and like the rest of you, I am no longer a fan...nis.

Not that it’s not okay to enjoy evil characters! I was almost sad when Joffrey died, because at least he was fun evil, like a teeny overdressed Bond villain, and I always backed Tywin, because Charles Dance had world-historical gravitas that made him impossible not to respect. I was even willing to overlook Stannis’ past evils, like murdering his brother Renly via shadow baby, because murdering someone via shadow baby is a badass, if not very nice, thing to do. But Stannis’ sacrifice in Sunday's episode wasn’t evil in any way that could be embraced as a meme-able character quirk. It was a wrenching gut-punch, a nauseating scene shot for maximum viewer pain, one that's impossible to reconcile with cutesy memes of him in a Coachelle-esque flower crown or to paint in shades of gray (like Stannis’ dumb gray outfits, which used to charm me and now I think are LAME, get Melisandre to take you shopping, Stannis, jeez).

My love for Stannis grew mainly because he was sort of hilarious -- as I wrote in my defense, "In a world full of over-the-top, self-important drama queens — Cersei in her flowing brocade gowns, Tyrion with his boozing and his zingers, Dany with her dragons and her proclamations — Stannis is hilariously, lovably square." Yet while I once found his stoic affect funny, now I see that it is emblematic of the show's bleakest tendencies. His great sacrifice cuts to the very heart of darkness of the show. Here's Hill's eloquent assessment of what Shireen's death means in the context of the show:

"Game of Thrones” is obsessed with reminding its audience that a woman’s work is never done, that her body is never her own, that her life is never safe, and each time the audience pushes back against the idea that such depictions are a foregone conclusion, they are informed that it is the way of the world they themselves live in and painting the world any other way would be disingenuous. Don’t shed tears for Shireen Baratheon. Shireen has finally slipped free of the chains that bound her to a world always doomed to betray her. Save your tears instead for all the women left in Westeros who have only the worst to come. Or, better yet, save your tears for yourself, because the men running “Game of Thrones” don’t think you’re looking into a TV screen; they think you’re looking into a mirror."

While Stannis' sacrifice isn't exactly an inconsistent character move — Stannnis has always been single-minded and unflappable, willing to do what it takes for the good of the realm — his daughter was his emotional anchor, the golden locket round his neck that made it okay to overlook all the rest. Shireen made Stannis, at least for me, intrinsically lovable, and made it okay to laugh at the rest of him. Now he's just an empty shell, like everyone else in this godforsaken land.

The interesting thing about “Game of Thrones” is that this sort of ambivalence is built into the fabric of the text. It's part of why “Game of Thrones” has captivated such a wide audience: while it’s a fantasy world, it captures a very real element of the human condition, the fact that there is no black and white, just many shades of gray. This is a world where young girls are sold into sex slavery, where innocents are murdered in pursuit of power, where there is no such thing as a right decision in a world full of brutality and injustice. This is what “Game of Thrones” does – it makes you question your allegiances, makes you see something one way and then flips it on his head. Like when Jaime was galavanting around Westeros with Brienne as part of  the world’s best buddy comedy one minute, and then raping his sister in front of his son's dead corpse the next. Or how Theon, initially just an attractive red-headed member of the extended Stark clan, betrayed his family and then burned two children alive. This sort of ambiguity is even true amongst the characters we still consider "good" -- our erstwhile heroine, Daenerys, ordered a whole lot of of people crucified in a show of strength, while our other heroine Arya has decided she wants to murder people for a living. Littlefinger, who is one of the most manipulative and self-interested characters in Westeros, still inspired sympathy with his seeming loyalty and tenderness to Sansa back in episode four. The fact is, "Game of Thrones" is a relentlessly cruel world that forces people to do cruel things to survive (while the good and noble, like Ned and Oberyn, don't keep their heads attached to their bodies very long).

Heck, even Stannis’ sacrifice may not be in vain. Perhaps Melisandre was right and this was the only way to win the Iron Throne, and the sacrifice will prove "worth it" in the sense that he will be a just ruler, and his competent leadership will save many more young innocents from suffering fates like Shireen. But on a personal level, I think that's it for Stannis. How could we the fans possibly love him anymore, given what he's done? How could he ever be the same man after all this? As Brandon Nowalk wrote at the A.V. Club, "I bet Stannis himself becomes a shadow after this..... this “sacrifice” doesn’t just mean the death of Roose Bolton or whomever. It means the death of Stannis."

Or as Nina Shen Rastogi put it at Vulture, "It’s still a very open question whether her death will accomplish anything for Stannis’s military campaign — and that open question is part of the horror — but it feels like it’s explored some new emotional territory here, in ways that the Sansa rape didn’t. Stannis has driven a stake through his own heart, and if he wins the Iron Throne after all, the memory of this pyre will make the victory a Pyrrhic one."

Yes, this is a tough world that forces people to make tough choices. But no matter how things shake out for Stan the Man, this one viewer will never ever be able to look at him in the same way. Sorry, Stan. We had a good run. 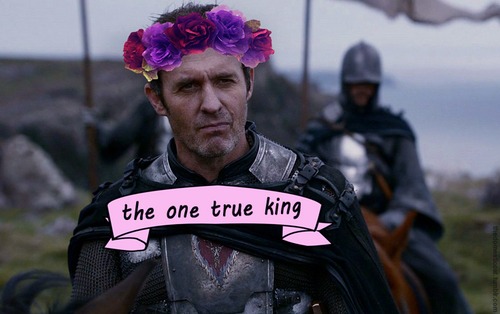 P.S. In terms of Iron Throne contenders, I am now rooting for Balon Greyjoy.