The delightful fruits of '90s nostalgia: My favorite women in rock are reuniting

L7, Veruca Salt and Babes in Toyland reunions remind us why the '90s were amazing for female musicians — and fans 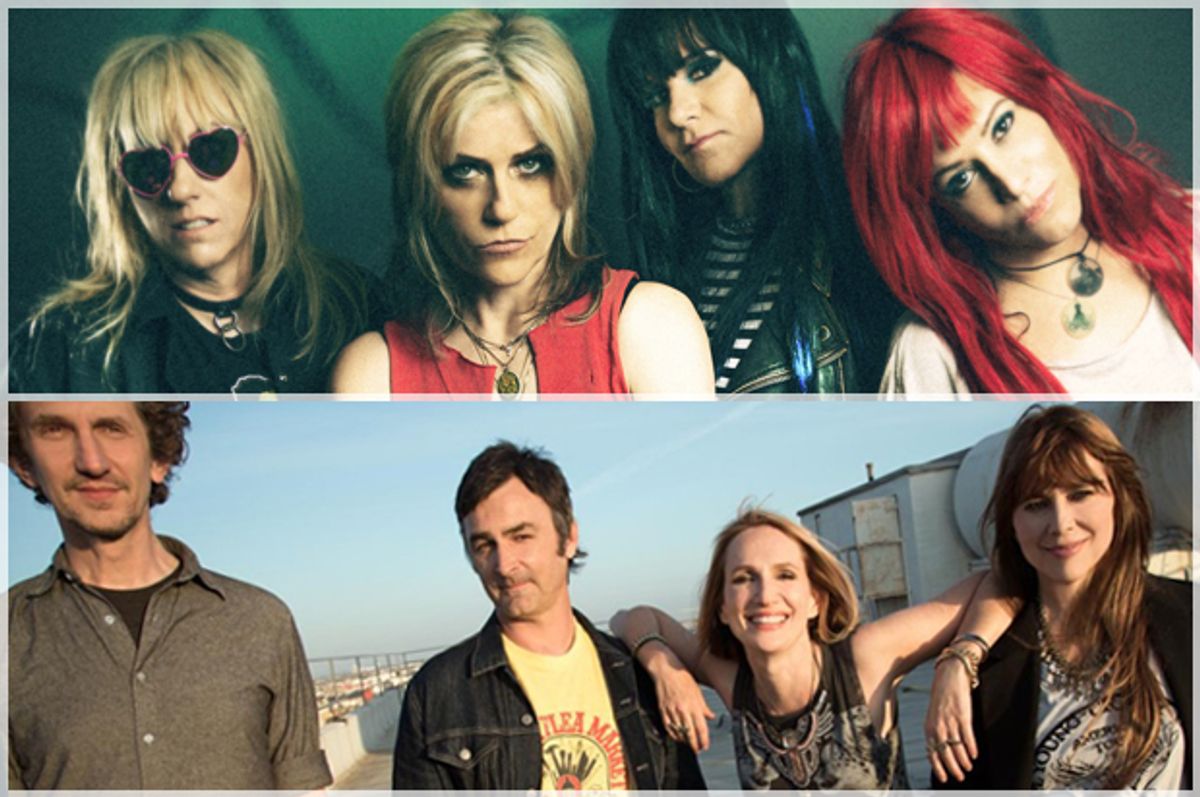 A few weeks ago, the L.A. grunge-punk quartet L7 played their first show with their original lineup in nearly 20 years. Going by glowing reviews -- LA Weekly said the set "came off like a cross between brain-bleeding Motörhead, the hardest parts of Mötley Crüe, and quasi-Sex Pistols trash" -- the band's impending tour dates both overseas and in the U.S. are going to be must-see events. Of course, L7 is joining a long list of '90s bands who have reunited to make new music, release a documentary and/or tour: Recent months have also seen the live return of riot rockers Babes in Toyland and the indie-fuzzpop band Veruca Salt. The latter group went on their own well-received tour last year, and also just announced the release of a new album, "Ghost Notes," which follows a stellar 2014 Record Store Day release."

Although I've been happy to see some of the decade's other notable bands reunite (such as, and especially, Failure), I'm especially excited to have some of the women I watched on MTV and heard on the radio return. Admittedly, some of this is tied to nostalgia: When songs such as L7's "Andres" and Veruca Salt's "Seether" became popular, I was a kid trying to navigate my way through high school and adolescence, and the alternative culture in which these groups were lumped was my lifeline. I used to sneak my Walkman into study hall and quietly listen to the local modern rock station (shout out to 107.9 The End in Cleveland!), when I wasn't poring over music magazines from both the U.K. and U.S. for fashion and music guidance. While I had no shortage of emotional angst and physical awkwardness, the predilection toward nonconformity and (perceived) weirdness of this era gave me much comfort.

What stands out to me now is how casually, effortlessly diverse all of this music felt at the time. In fact, I count myself lucky that at this pivotal, pre-Internet point in time, I had so many smart, interesting women available to me as role models; to name a few artists, Tori Amos, Bjork, Juliana Hatfield, Liz Phair, Garbage's Shirley Manson, PJ Harvey, the Breeders' Kim and Kelley Deal, and Letters to Cleo's Kay Hanley. (In fact, I distinctly remember trying to cobble together an outfit similar to the one the latter wore in the "Here & Now" video.) I wasn't necessarily old enough (or sophisticated enough) to have experienced everything they were singing about, but their different perspectives and viewpoints opened my eyes to possibility, and shed some light on the kind of woman I one day might become.

That's no minor thing. As I've discussed before, having women be an equal, included part of any musical conversation is of vital importance; that it wasn't weird to see women doing their own production/programming or playing guitar was a revelation. At the same time, excitement about women-fronted bands or groups with women in their ranks is a tricky minefield to navigate. Lumping these acts together into any sort of category or genre (e.g., "girl rock," "Women in Rock," "Women Who Rock") doesn't make any sense whatsoever. In fact, not only is it unproductive, it's condescending to their musical talent, as each group does its own thing and has its own influences and mythologies. And as the Stranger's pointed "Men Who Rock" issue underscores, flipping the pigeonholing just comes off as ridiculous.

Yet today, when I see videos of L7 snarling and thrashing around onstage, or hear Louise Post and Nina Gordon's bewitching bee-stung harmonies in a surging song such as "The Museum of Broken Relationships," I feel empowered and inspired in different ways than I do when listening to men-centric bands. Does acknowledging I react differently to women musicians mean I'm somehow inadvertently othering or segregating them? (An excellent Flavorwire piece about the current crop of talented women artists asked a similar question: "Even if your intention is to celebrate women, is it harmful to point out gender at all?") Or is this just that their sonic characteristics, lyrical themes and/or personalities resonate with me more because  they're more relatable, that I can see myself in them more? The latter isn't necessarily a function of gender, just a byproduct of individual, personal preferences and sonic taste.

And there's no easy answer or solution to addressing this dilemma, simply because there's no one correct (or preferred) way to point out distinctive traits that sometimes -- but not always -- contribute to the essential nature of someone's art. With that being said, I'm interested in (and heartened by) the ways in which so many modern musicians are so skillfully navigating (or stoking) the waves of '90s nostalgia permeating pop culture. First and foremost, there's the respect afforded to the iconic women of that era, whether it's the rabid interest in Kim Gordon's memoir (and the Sonic Youth co-founder's enduring status as a feminist goddess) or Lana Del Rey embarking on a summer tour with Courtney Love, a perfect pairing if there ever was one. Other artists are very much making it clear that they're not going to be marginalized or limited by gender. For example, Alana Haim (of the band HAIM) told the Daily Beast, "You would never call a band like The Killers a boy band. So why are we a girl band? You know? We’re a band." And although Lorde's fashion sense has been hailed as very much '90s-inspired, her self-assured, outspoken persona and intelligence have far more ties to the way the decade championed and buoyed strong women.

Of course, falling into the trap of romanticizing the decade (or thinking it was somehow better than today) is dangerous territory. After all, as that Flavorwire piece points out, there was plenty of eye-rolling sexism and stereotyping occurring in magazines back then, in the form of Spin's “The Girl Issue" and Rolling Stone's "Women in Rock" issue. More than that, every generation's teenage life jackets or musical fads take on different forms, and so ranking one era as better (or, worse yet, more authentic) than another time period is an exercise in boring futility. But for me, there's something powerful in seeing a continuum develop between several generations of women, musicians returning to active performing and contemporary artists perpetuating the best aspects of the '90s. It reminds me both of the woman I longed to be two decades ago -- and the malleable, still-a-work-in-progress I am today.