"The Wolfpack" hype: When the line between documentary and "reality" blurs, we see the story we want to see 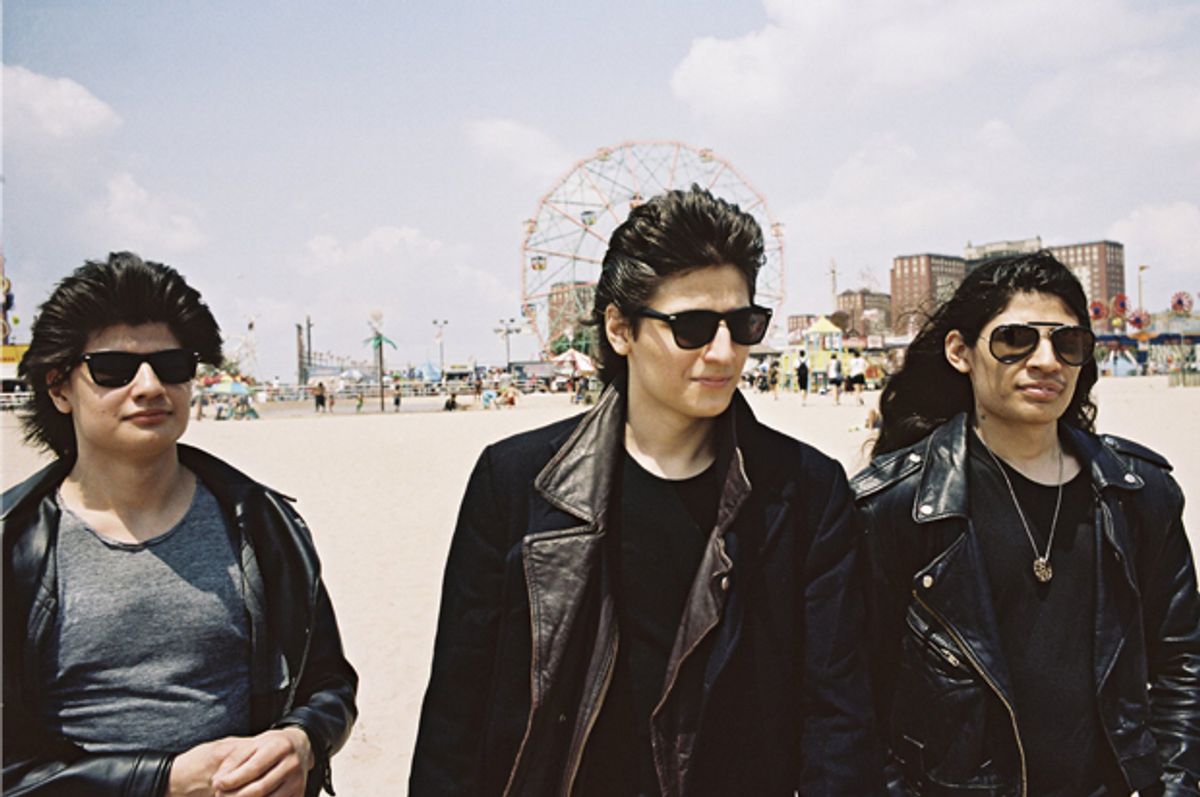 Winner of the Grand Jury Prize for U.S. Documentary at this year’s Sundance Film Festival, Crystal Moselle’s debut feature “The Wolfpack” is “the incredible true story of six teenage brothers raised in isolation in New York, with movies as their only outlet to the world,” according to the press notes that could also serve as a reality TV pitch. The film focuses on the Angulo brothers — eldest Bhagavan, the twins Govinda and Narayana, Mukunda (called the “alpha” of the pack), and younger siblings Krsna and Jagadisa (who now go by Glenn and Eddie, respectively, according to this interview they gave to Vogue) — whom Moselle first encountered not far from their Lower East Side apartment as they raced past her, catching the fashion filmmaker’s eye with their long hair and striking looks. She chased them down, struck up a conversation, mentioned she was a filmmaker, and voilà! — a friendship was born.

As time went on Moselle discovered the boys’ unusual upbringing. They were raised by a Peruvian dad and a hippie mom from the Midwest, who fell in love at Machu Picchu and traveled the world before landing at a Hare Krishna Center in West Virginia where daughter Visnu (who has special needs and is rarely seen in the film) and the first three boys were born. They traversed the country in a van in the early '90s, searching for opportunities for the father – who is philosophically opposed to work – to become a rock star. (And by the way, much of this I learned from the press notes, not the film.) Arriving in NYC in the mid-'90s, the siblings were all home-schooled and infrequently allowed to leave their Delancey Street apartment once they moved to the Lower East Side.

With little access to the outside world, music and cinema became the kids’ refuge. The boys re-created favorite flicks like "The Dark Knight" and "Pulp Fiction," crafting props and costumes from everything from cereal boxes to yoga mats. It was only after Mukunda broke out of the apartment in January 2010 — wearing a Michael Meyers mask for protection — that their un-cloistered lives began. Enter Moselle and her camera.

Recently, I was able to chat with the movie-mad brothers, who over the phone come across as incredibly articulate, and impressively socially adjusted for kids who’ve only been experiencing the world outside of their apartment for five years. Ask them about their January trip to Sundance, and Bhagavan calls it a “turning point” that presented a lot of opportunities. Aspiring DP Govinda mentions meeting Christopher Nolan’s brother and Greta Gerwig, and of passing out business cards.

When asked about the parents’ initial response to Crystal’s presence in the apartment, they allow that though she was the very first guest permitted inside, Mom and Dad nevertheless were welcoming. They say their parents were happy that the boys had made friends, especially with a filmmaker. Mukunda adds that their folks weren’t suspicious at all since they shared a common love of movies – and also that Crystal was a filmmaker who “came toward us with curiosity.”

If you broach the subject of whether there were positive aspects to their shared sheltered existence, Mukunda notes that it “gave us a lot of time to think,” and more time to be creative. Bhagavan adds that music was also a part of their lives, specifically bands that their father enjoyed like AC/DC, Led Zeppelin and Deep Purple. They’d even formed a band themselves — not to mention created comic shows that were “like SNL.” Though they’d seen "Pulp Fiction" on TV, it wasn’t until they emerged into the world that they discovered "Reservoir Dogs." In other words, they sound like fairly run-of-the-mill, artistically inclined adolescents.

Which — if you take away the “we were imprisoned in an apartment” angle — is what they are.

Without it, a group of boys who re-create blockbusters at home isn’t all that special – three 11-year-olds in Mississippi started shooting their homemade "Raiders of the Lost Ark" all the way back in 1982. It isn’t anything that hasn’t been done numerous times before, even gently spoofed on the animated series "Home Movies." And eccentrics are a dime a dozen in New York, so home-schooled kids with hippie parents and Sanskrit names wouldn’t automatically make for compelling documentary material either. What makes the boys interesting — exceptional, worthy of the documentary treatment — is their cinematic Cinderella tale, one in which they overcome extreme adversity with the help of the silver screen. (Or as the press notes put it, they are “a true example of the power of movies to transform and save lives.”) Their hard-knock story is catnip – especially to both filmmakers and film critics. Truth is often stranger than fiction, of course. I’ve no idea whether the boys were firmly locked away (for a shocking 365 days during one year) throughout their formative years, or whether those claims were exaggerated, but I’ll admit little pieces of the stories being told about their story do nag at me.

For example, according to a Daily Mail article from all the way back in February, “Ms. Moselle described first seeing the brothers, on First Avenue, when they were all walking in a 'pack', wearing sunglasses. Their look had been inspired by a favorite film, 'Reservoir Dogs'.” A NY Daily News piece from this past Sunday notes that “In 2010, on their first night out as a group, they caught the eye of Crystal Moselle, a former School of Visual Arts student and aspiring filmmaker.”

Yet one of the brothers, in response to my query as to why their parents would encourage them to re-create violent films like "Reservoir Dogs," clearly stated during our phone conversation that they’d not discovered "Reservoir Dogs" until after they’d started leaving their apartment. (Though they all quickly stressed that they’d seen "Pulp Fiction" on TV.) How is it that the brothers met Moselle dressed as characters from a movie they had yet to see? I’ve no idea. The timeline confusion does not necessarily render "Reservoir Dogs" any kind of smoking gun, of course — in that same Daily News article Moselle is quoted as saying, “They were all dressed in black, with long hair. I instinctually ran after them to talk,” with no mention of the Tarantino film.

Perhaps the brothers had seen clips or stills from the flick. Or maybe Moselle had actually met the siblings on their second or third excursion outside – and they’d discovered "Reservoir Dogs" on their first. Maybe the Daily News had gotten the dates wrong. I’m not picking on the Daily News; this New York Times piece notes, “It was Mukunda, the third youngest and a natural leader, who, in April 2010, at 15, first defied his father’s orders and slipped outside.” Furnished press notes say that Mukunda escaped in January 2010.

Time could very well take on a different meaning when one is locked away for years on end, for all I know.

(After this article was published, I spoke with Joe Neumaier of the Daily News, and he clarified that the brothers did meet Moselle on their first night out as a group, but they were not in their 'Reservoir Dogs' attire when they met her. Those clothes came later.)

And in a recent interview with KPPC's the Frame, Moselle describes the scene with more detail: "She told us how she first spotted the brothers skateboarding in New York on a rare trip outside of their apartment." Skateboarding's a fairly outdoor activity for kids who rarely leave their apartment, and this detail, evocative as it is, doesn't make it into all stories written about their first meeting. It's a small detail, but the breathless media hype that these boys had spent years in isolation often glosses over other parts of their story. According to this week's Daily News article: "Contrary to what’s been depicted in press materials, the brothers have not 'spent their entire lives locked away from society.' Some of the elder boys spent part of their early childhood in California and West Virginia. Once in New York, they were taken on summer outings to Central Park, the American Museum of Natural History and the World Trade Center by their mother, Susanne, who homeschooled them in the four-bedroom LES apartment they moved into in 1996."

So let’s just put speculation aside for now and look at the bigger picture – which is why this particular story got to the screen. When it comes right down to it, Moselle found in these boys a once-in-a-lifetime subject, and the boys, with their filmmaking aspirations, needed someone who could make them into stars. I don’t think it’s incidental that they were seemingly taught at an early age to value not just creativity but fame. (Moselle told KPCC that "to be honest, I think that their father saw some sort of opportunity for his kids. Because, at the end of the day, he always had these delusions of grandeur, that they would be pop stars or something like that. A little bit of Jackson 5 essence to it.") Currently, Govinda, the only brother living outside the home, works in freelance film production and resides in the Bed-Stuy section of Brooklyn. It’s safe to say this might not be the case were it not for Moselle’s divine intervention.

Indeed, Moselle and the family formed a partnership, as do all documentarians and their subjects. However, in this case it was the subjects, and not the director, in firm control, slowly dishing out access like bargaining chips (which explains the doc’s odd lack of emotional intimacy). One of the most revealing scenes, in which the siblings’ mother reconnects with her own long estranged mother over the phone, is shot not by Moselle, but by one of the boys and later given to the director as a “present.” This family is in firm control of their own narrative.

One could say that the director was being (willingly) used, giving up her right to dig deep – Moselle has claimed she wasn’t trying to be a journalist or a psychiatrist, just a filmmaker watching events unfold – in return for a sensational story. One could even call it a form of mutual exploitation. And in this sense, "The Wolfpack" clan has more in common with the Kardashians than they do with traditional documentary subjects. I don’t classify their story as a “hoax,” as a New York Post story reported some wondered at Sundance — that would be too simplistic an assessment in this modern age of cinematic hybrids — but I also don’t equate reality TV with cinema vérité. Truth be told, "The Wolfpack" feels as real as "Keeping Up With the Kardashians." Sure, I buy that the Kardashians are a real family, but I don’t pretend to think they are allowing me into their real lives. I don’t know the Kardashians. I have no idea who the Angulos are. And perhaps, quite possibly, neither do they.

Perhaps we're projecting onto the brothers the Hollywood-worthy story we want to see.  The media – myself included – never asked the siblings, “During the years you were allowed outside more frequently, where did you go, what did you experience?” No – “trapped inside an apartment for an entire year raised by fan-boy cult flicks” is the hook.

And in this sense we’re all complicit in crafting "The Wolfpack" narrative. Nuance and complication don’t make headlines, after all. We’re all editors, shaping the story, cleaning up the messy details of real life, avoiding contact with what got left on the cutting room floor. And in the end, creating our own urban myths.