Libertarianism is for white men: The ugly truth about the right's favorite movement

Republicans' demographic challenges have been well documented. Libertarians' problems are even worse 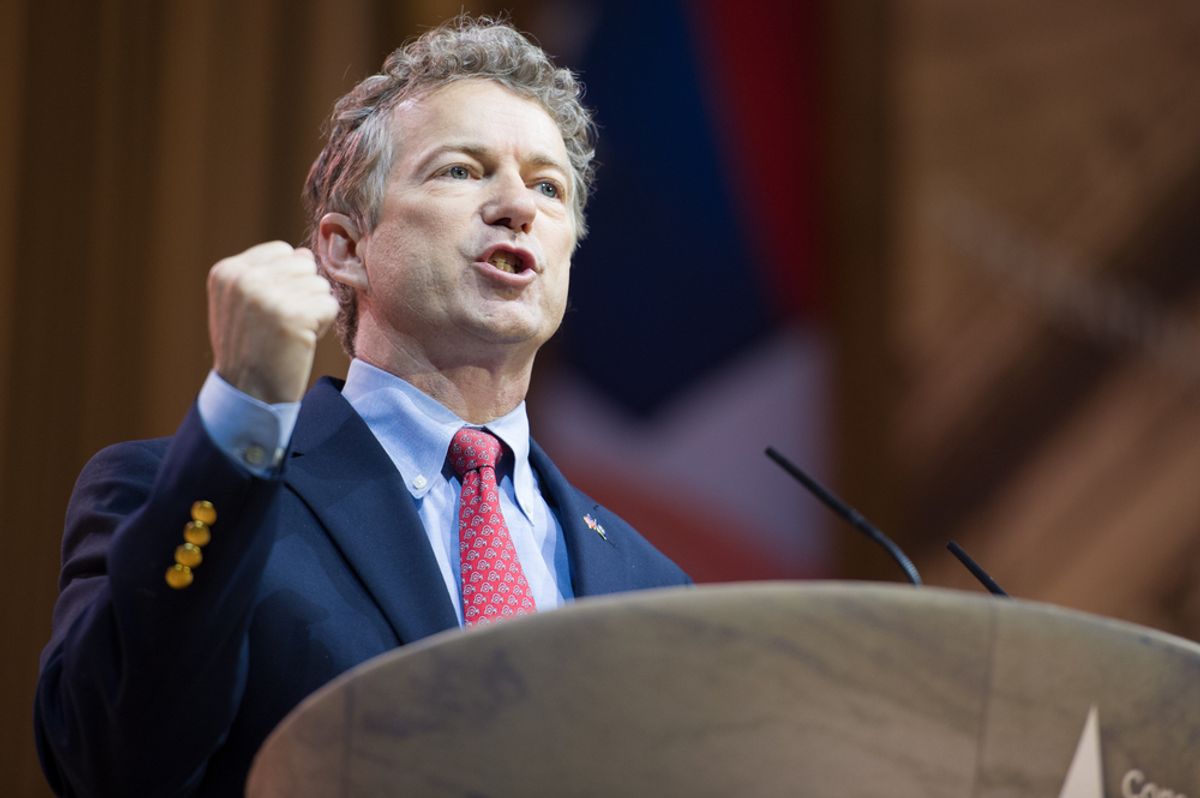 Why are libertarians so overwhelmingly white and male? This is a question that Jeet Heer of The New Republic explored last Friday, after a new CNN poll found that presidential hopeful Rand Paul, who happens to be the favorite among libertarians, is very competitive in the primaries amongst male voters, but almost completely rejected by females. This is a problem that has long haunted conservatism, but it is even more drastic for ultra-right wing libertarianism.

In a 2014 Pew poll, it was found that about one in ten Americans describe themselves as libertarian, and men were more than twice as likely to be libertarians. In a 2013 Pew poll that Heer states in his article, it was found about two-thirds (68 percent) of American’s who identify as libertarians are men, and 94 percent are non-hispanic whites. Compare this to "steadfast conservatives," who were found to be 59 percent male and 87 percent white, or "business conservatives," found to be 62 percent male and 85 percent white, according to another survey done by Pew. Clearly, the entire conservative movement is dominated by white males, but libertarians are the most male-dominated.

Okay, so libertarianism attracts nerdy white males, but surely these are not the only ones making up the dedicated crowd? While looking at the larger conservative movement, it becomes a bit more clear that the hostility towards government and collective movements in general tends to attract white males who want to preserve their dominance in a society where they are quickly becoming minorities.

Take the following passage written by a young libertarian activist:

“[E]very piece of anti-discrimination legislation passed over the past few decades, ignores one of the basic, inalienable rights of man — the right to discriminate. [Though] eliminating racial and sexual prejudice [had] noble aspiration, [anti-discrimination laws] necessarily utilize the ignoble means of coercive force.”

That young activist? Rand Paul in 1982. Sure, that was more than three decades ago, and its not fair to go after someone for something they wrote back in those naive college days. But has Paul’s outlook changed at all? Not really. In his now infamous interview with Rachel Maddow, he admitted that he had a major problem with the Civil Rights Act of 1964, particularly the provisions that “harbor in on private businesses and their policies.” In other words, he didn’t like the government telling businesses that they had to serve black people. According to libertarians, this is a clear violation of one's freedom to discriminate; that if a business owner does not want to serve a black person, that is their right. Of course this kind of philosophy is going to be very attractive to those racist business owners.

Last year, a study at Northwestern University found that white, independent-minded American’s tended to shift towards conservatism when they found out that demographic changes would be making them minorities. “Perceived group-status threat, triggered by exposure to majority-minority shift, increases Whites’ endorsement of conservative political ideology and policy positions,” wrote the researchers, Maureen Craig and Jennifer Richeson. This study seems to confirm that conservatism, for many white Americans, is the last bastion of hope against the inevitable decline of white dominance.

Libertarianism is especially alluring to these individuals, though there are cutthroat strifes within the libertarian movement itself, between the more studious and tolerant factions, like the folks at Reason magazine, and the more reactionary and bigoted groups, like the “neo-Confederates,”  largely influenced by the libertarian writer Lew Rockwell.  You may remember hearing about Rockwell because of his association with Ron Paul. Reason reported back in 2008 that Rockwell had ghostwritten Ron Paul’s newsletter, which had written some extremely distasteful and downright racist stuff, like the following comment on the L.A. Riots:

“Order was only restored in L.A. when it came time for the blacks to pick up their welfare checks.”

So, while the libertarian movement as a whole is not inherently bigoted, and many believers despise intolerance, the ideology itself does attract many bigots who see the freedom-obsessed culture as a way to protect their “right” of intolerance, and crack down on collective movements that fight for equality. Many of these folks would like to return to the good old days, when robber barons and white men ruled. The free market ideology is particularly well-suited for the robber barons, while the freedom to discriminate comforts the neo-Confederates. Like the larger conservative movement, libertarianism is a sanctuary for nostalgic white males. Fortunately, nothing can prevent the white mans inevitable fall from dominance, and in the future, many white males may very well change their mind on the so-called "right to discriminate."