6 best friends for Tyrion: Ranking the "Game of Thrones" characters who are "the right kind of terrible" for each other 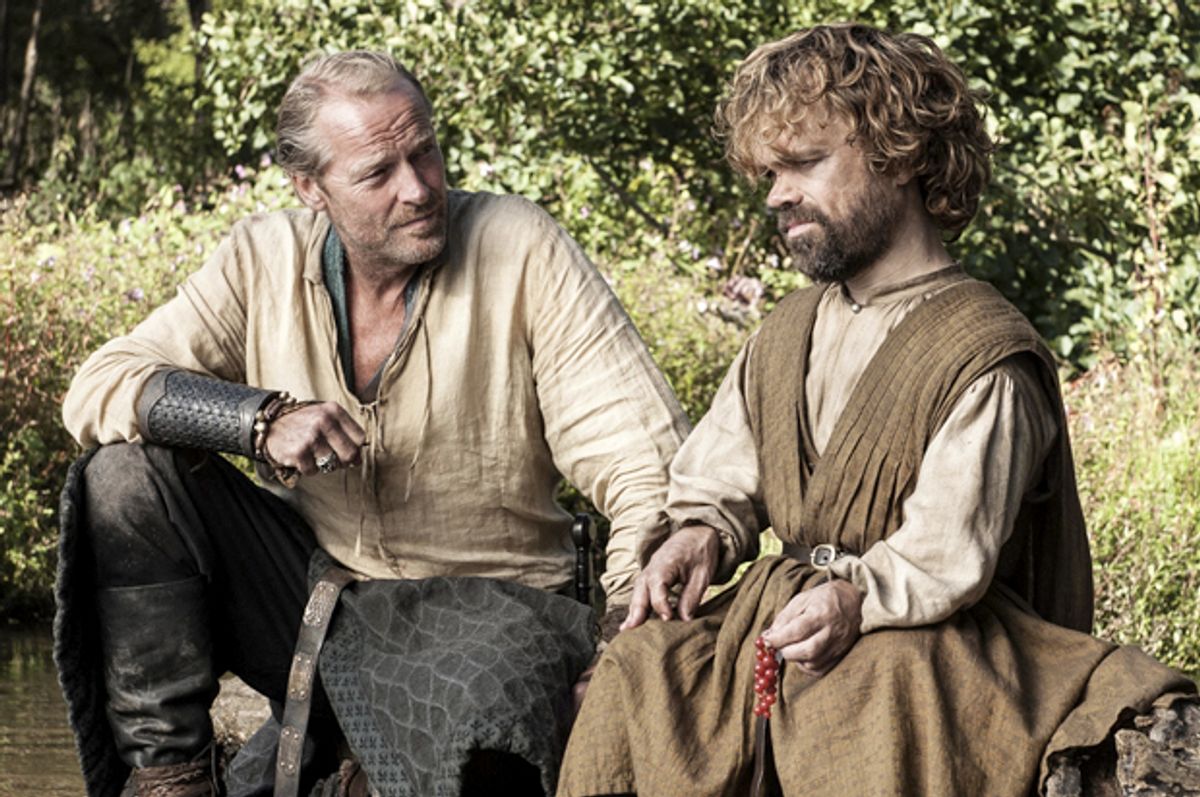 Tyrion Lannister has had a lonely lot in life. Rejected by his family and mocked for being a dwarf, he also was also singled out for being one of the few sane thinkers in King’s Landing amid a bunch of evil, megalomaniacal crazies (most of whom happen to be related to him). But when he wasn't being targeted for assassination / imprisoned / wrongfully accused of murder / exiled / shoved in a crate, Tyrion did meet few kindred spirits a long the way — some buddies in which to share his perilous journey. Now, at the side of Daenerys Targaryen, it looks like our favorite Lannister may finally have found a place where he can be accepted and respected, at least until the next awful thing happens.

6. Jorah Mormont
Jorah and Tyrion's relationship didn’t get off to the best start, seeing as Jorah kidnapped him against his will, tied him up and refused to talk to him or even offer him flagon of ale for the road/sea (rude!). But they warmed up to each other after a while, thanks mostly to Tyrion’s incessant yammering. Before long, they were reciting bleak Valyrian poetry together, battling stone men, and doing some pro "yes and" improv work in front of the Meereneese slavers. They won’t exactly be exchanging BFF bracelets any time soon -- also, Jorah should probably avoid any putting pressure on that graying wrist of his -- but they don’t want to murder each other either, which is really about the best you can hope for when it comes to Westerosi partnerships.

5. Jaime Lannister
It’s hard to say whether these two really count as buddies, since they are blood-relatives (probably), but we’ve decided to include him here because while most of Tyrion’s relationships are based in strategic alliances, there’s a genuine love and tenderness between the two Lannister boys. In particular, Jaime’s protectiveness over his younger brother — compared to Cersei's and Tywin’s disdain for him — really humanizes Jaime, and this is a guy who pushed a little boy out of a window and raped his sister in front of a corpse, so he needs all the humanizing he can get. Alas, Jaime cut ties with his bro when Tyrion murdered their father on the loo, but the fact that Tyrion still loves his big bro makes their rift all the more gut-wrenching. Don't you know that blood is thicker than (toilet) water, Jaime?

4. Daenerys Targaryen
It remains to be seen what will come of the alliance between Tyrion and Daenerys. They were both pretty wary sizing each other up at first — as Tyrion put it, he's looking to see if Dany is "the right kind of terrible" — but it seems like his political acumen and her desire for benevolent rule/way with fire-breathing dragons might be the exact combination of skills to actually do some good in Westeros. Plus they both have some serious daddy issues they can bond over. Rooting for these two!

3. Podrick Payne
Aw, Pod. What a sweetie. He may have begun simply as Tyrion’s squire, but Pod consistently went above and beyond the call of duty in his loyalty to Tyrion, saving his life at Blackwater, refusing to sell out his bud when Tyrion was under arrest for murder (although to be fair, Tyrion did help Pod discover his natural prowess with the ladies, so tit for tat). Their parting words in Tyrion’s jail cell — with Tyrion saying “there has never lived a more loyal squire,” as Pod had tears in his eyes — felt like the summation of a truly meaningful friendship, the kind that you're lucky to find once in a lifetime.

2. Lord Varys
Varys was always an important political ally for Tyrion back in King’s Landing, but their tentative alliance has grown into mutual understanding, even affection, over time. As actor Conleth Hill put it in an HBO Q&A, there exists "a recognition that they're both survivors who both have been persecuted all their lives because of how they are, as opposed to who they are.” While he’s not the most obliging when it comes to Tyrion’s overseas travel arrangements (a crate? c’mon dude) we're willing to forgive Varys' inhospitality because of how fun it is to watch these two prickly wordsmiths snipe at each other (in terms of road trips we'd like to watch in feature-length form, 'Varys and Tyrion take Essos'  gives the Bronn and Tyrion show a run for its money).

What’s more, their relationship possesses something deeper than mere banter; in fact, of all Tyrion’s companions, Varys might be his most kindred spirit, a fellow high-minded thinker who truly cares about the good of the realm, and who sees the value in Tyrion where others have overlooked him. As Varys tells Tyrion when he asks why he risked his life to free him, it’s because "men of talent have a part to play in the war to come." It's Varys who re-instills Tyrion with the will to live, so much so that Tyrion later acknowledges that Varys "may be the only person in the world [he] trusts" (other than Jaime). Aw!

1. Ser Bronn of the Blackwater
These two may have started out with a mutually beneficial sellsword-employer relationship, but their shared experience of adversity, not to mention their many commonalities — namely, a shared love of boozin', ladies, pithy banter, and not getting murdered — proved to be the breeding ground for a legitimate friendship, or at very least, “Game of Thrones”’ most watchable buddy comedy. Seriously, we could watch these two all day. Spinoff please: