The world's literally falling apart, but even activists now admit they're powerless without help from the uber-rich 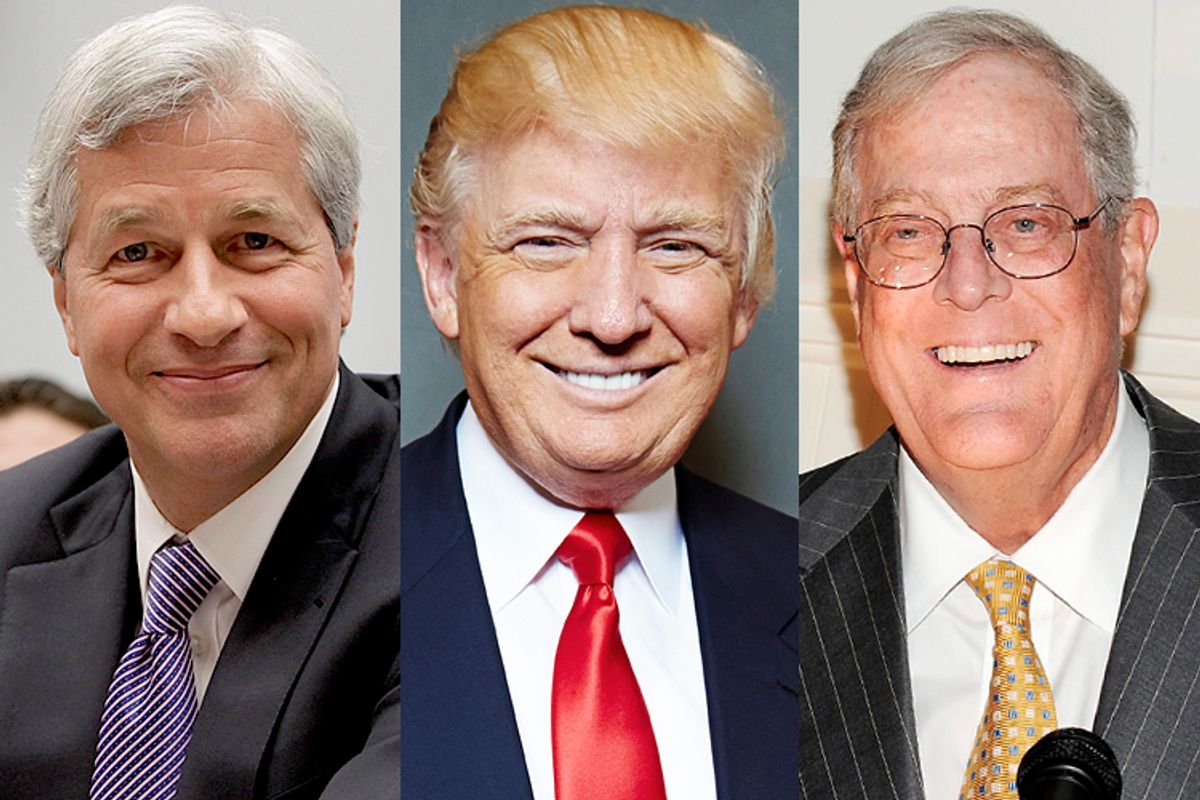 There has been a long running joke in political circles that we should just force politicians to wear the logos of their donors and favored lobbyists the way NASCAR drivers wears logos on their jumpsuit. It would make it much easier for voters to identify to whom our elected representatives really answer. Right now they just wear an American flag pin and that doesn't really tell us much.

As I wrote the other day, there doesn't seem to be a whole lot we can do about this. Billionaires are perfectly happy to "own" politicians these days. If they ever had any shame about openly offering huge sums of money to anyone who will advance their agenda, paying lip service at best to the idea of democracy, they have managed to overcome it.

(Ironically, the group which filed the lawsuit challenging the democratic concept of "one person, one vote," which was just accepted by the Supreme Court, is financed by right-wing millionaires through the old-fashioned tax-deductible "charitable trust" model, so perhaps these ostentatious billionaires aren't quite ready to take full ownership of the franchise just yet.)

Since this insane income inequality is increasingly seen as almost supernatural, a condition ordained by the "invisible hand" of God, and to such a degree that many liberals have come to the conclusion that the only way to advance a liberal agenda is to find our own liberal billionaires. And that leads to certain awkward alliances, like this one, via Think Progress:

Usually the news that a major Republican donor will be dropping hundreds of millions of dollars on a campaign to influence voters on energy and climate change would make environmentalists worried. But not when that donor is spending $175 million to get Republicans to talk about clean energy and the solutions to the climate crisis.

Entrepreneur Jay Faison founded the ClearPath Foundation in December of last year in part to restore Republicans’ environmental legacy. Tuesday he announced that he will be investing $175 million on a public education campaign that will include a social media and online advertising to get Republicans to talk about market-based solutions to climate change. That includes $40 million through the 2016 cycle, and another $10 million as a seed fund for a political advocacy group. The foundation invested between $1 and $9 million in a few solar energy projects.

It is very hard to argue with that, and the environmental groups don't even try. There is no greater challenge on the planet than the climate crisis and it would be foolhardy to turn away from any possible assistance in getting that done. The Sierra Club's national campaign director Debbie Sease told Think Progress, "it may or may not be enough, but it’s a really good thing. If you look at the scale of what we need to do on climate, you can’t do it with one party, you need Republicans too. It would be naive of me to think it’s the one thing that’ll turn it around, but it’s a start."

Unfortunately, the right is antediluvian on this issue, so his "starting point" is trying to get the Republican rank-and-file to admit that the problem even exists and that science isn't trying to yank their Bibles from their cold, dead hands. This man has his work cut out for him. And, at the end of the day, he will be trying to bring Republicans over to the cause while at the same time promoting conservative "solutions," to be named later. And, let's just say those don't have the greatest track record when it comes to dealing with massive global crises.

Still, climate activists are right to welcome any billionaires they can land. Up until now they've had only one high-profile billionaire in their corner devoting millions to the cause, Tom Steyer. He too has worked to elect officials who pledge to do something about climate change, but rather than trying to move the Republican mountain he's focused on electing Democrats. 2014, being a typically low turnout mid-term for Democrats was a disappointment, but he recently announced that he has decided to disband his non-profit climate and energy program altogether in what observers believe is an even greater commitment to electing climate hawks to government.

Again, one cannot blame the environmental community for embracing these billionaires. This problem is so urgent that they cannot afford to be high minded about who they have in their corner, even Republicans who will likely be on the other side of any other issue they might care about. But you have to acknowledge the fundamentally unpleasant reality that it is distasteful for a supposedly democratic society to be chasing the super-rich around begging for what amounts to tip money to save the planet.

Sure, it's a good cause, just as George Soros putting money into voting rights programs is a good cause. (Although unlike the other mega-rich donors, he's abandoned any support for political parties or individuals.) But then Sheldon Adelson thinks backing candidates who promise to kill unions, take a hard line on Israel  and keep him out of jail is in service of good causes too. And Foster Friess truly believes that abortion is akin to mass murder so when he spends millions on a Christian Conservative politician it's done out of heartfelt belief. I don't think we need to even discuss the fact that the Kochs are motivated as much by their libertarian ideology as they are by profits: to them it's the same thing.

At what point do we simply admit that our democracy has become a competition among billionaires with the citizens simply acting as spectators on the sidelines? And if that were to happen, let's also admit that the outcome would be many, many players for the cause of low taxes and regulations and very few playing to help the poor or provide a first world safety net for all citizens. Let's just say that the conservative billionaires would be the 1927 New York Yankees and the liberals would be the Chicago Cubs. We might win a few games but I think we know who will win the series.

But perhaps we don't need a silly sports metaphor for any of this. What we are looking at is simply a return to a very old system. Sure, we'll dress it up with a ritual we call "voting" and call it a democracy. But when the government is populated by individuals who've won an electoral joust representing various billionaires competing with one another you can't really say that it's the real thing. That's what we call a feudal society and they tend to be very good for the nobles and  not so good for the serfs.