The Rupert Murdoch era is winding down: Why this could mean the end of Fox News as we know it 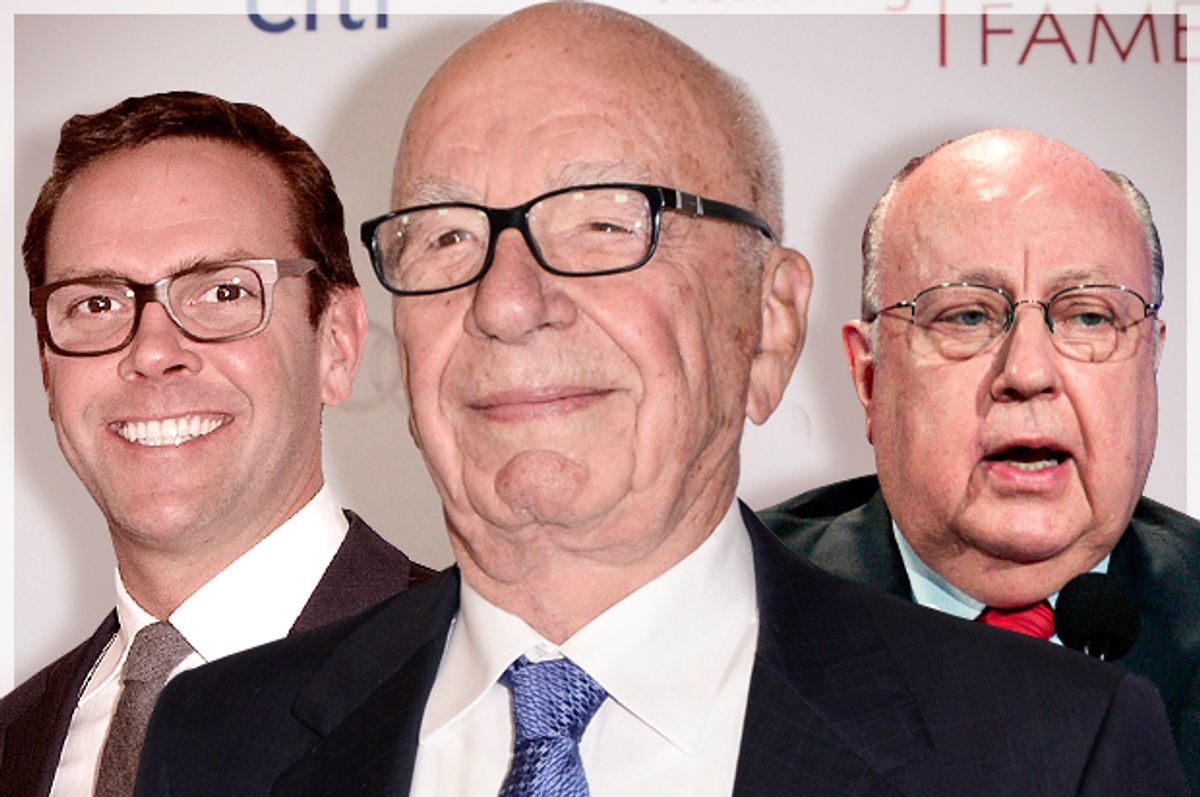 For Rupert Murdoch, the octogenarian billionaire who long ago established himself as the most powerful media mogul since William Randolph Hearst, it’s not dark yet — but it’s getting there.

According to surprise Thursday morning report from CNBC, the controlling shareholder and CEO of 21st Century Fox has let it be known that his long-rumored plan to take a step back from the media giant’s day-to-day operations would soon go into effect. And, as was widely expected, he hopes to pass the controls over to his sons, James and Lachlan. A corporation that had nearly $32 billion in revenue in 2014 is apparently being run as if it were a family business.

It’s too early to know whether this represents Murdoch’s transition into retirement or merely a reduced workload. What’s clear already, however, is that legendary paranoiac and Fox News mastermind Roger Ailes now has, for perhaps the first time in decades, a legitimate reason to be nervous. Because while Fox News may be a goldmine, it’s been known for some time now that the younger Murdochs find it also to be, well, rather embarrassing. And there’s reason to believe that their problem isn’t just with the channel’s reactionary politics, but with the man who runs it, too.

Here’s how Matthew Freud, Murdoch’s former son-in-law, put it to the New York Times in 2010, reportedly with Murdoch’s then-wife Wendi’s backing: “I am by no means alone within the family or the company in being ashamed and sickened by Roger Ailes’s horrendous and sustained disregard of the journalistic standards that News Corporation, its founder and every other global media business aspires to.” Freud is now divorced from Rupert’s daughter — but something tells me that “ashamed” and “sickened” feeling he allegedly shared with Murdoch’s children hasn’t dissipated.

Maybe even more worrisome for Ailes, though, is the fact that Murdoch’s son Lachlan will be, along with his brother James, running the company once the old man steps down. Lachlan famously left News Corporation (since transformed into 21st Century Fox) in 2005, after losing a power struggle with Ailes over his father’s favor. According to New York’s Gabriel Sherman, Ailes was almost giddy when it happened, going so far as to use Lachlan’s vacated office — in addition to his own — in order to sit in his vanquished foe’s chair and “gloat.” But now Lachlan’s back.

And that probably explains this report from Fox News itself, which came out soon after CNBC’s scoop, and its revelation that although Rupert will soon no longer be the man behind the steering wheel, Ailes will report “directly to Rupert Murdoch” — and not Lachlan or James. If the many outside observers (or stockholders) trying to read the Murdoch empire’s tea leaves were hoping for a sign that Ailes and Murdoch’s family had settled their differences, this ain’t it. Sure, Rupert might be an abnormally healthy and active 84-year-old with access to the best medicine money can buy; but 84 is 84, no matter how many billions you’re worth.

Does this mean that Ailes, a man who's been described as the human version of Fox News, is about to be canned? Almost certainly not. The channel’s still making money, and unless Rupert’s stepping-down is being instigated by undisclosed health issues, Ailes will still have the old man as his shield. But as Ailes knows all too well, considering the median age of a Fox News viewer, nobody cheats death. For Roger Ailes and Fox News-as-we-know-it, Murdoch’s surprise announcement on Thursday may in retrospect be seen as the beginning of the end.