Elijah Wood's guide to clean living: "The sensual things in life are what I’m attracted to"

Salon talks to the "Lord of the Rings" star about vice, poets, and the vices of poets in "Set Fire to the Stars" 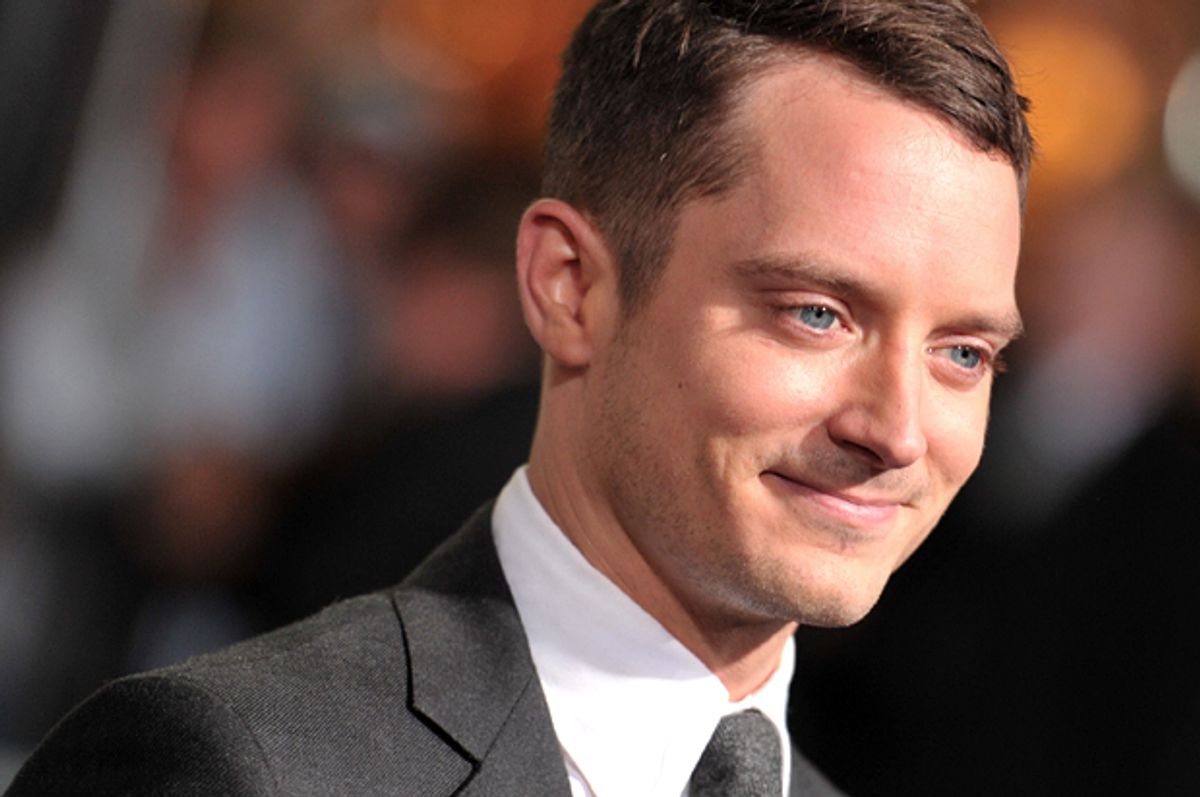 Elijah Wood may be forever linked to Frodo in “Lord of the Rings,” or Mumble the penguin in “Happy Feet.” But the talented actor does some of his most distinctive work in his smaller, independent films, like the British football film “Green Street Hooligans,” or the little-seen “Pawn Shop Chronicles,” where his character was tied down to a table with fishhooks holding his mouth open.

Wood’s latest role gives him a choice opportunity to shine. As poet John M. Brinnin, in the gorgeous black-and-white indie feature “Set Fire to the Stars,” his character is the American tour escort for a very drunk and misbehaving Dylan Thomas (co-writer Celyn Jones). Set in New York, circa 1950, Brinnin ends up being a glorified babysitter to Thomas. The part allows the actor to make Brinnin’s inner torture palpable as Thomas consistently disobeys and frustrates his American admirer. Wood gives a very subtle, internal performance opposite the more boisterous, colorful Jones, and a scene where Brinnin tells a horror story is absolutely hypnotic.

Wood chatted with Salon about the film, a shrewd portrait of celebrity worship, poetry, drinking and other vices.

What drew you to “Set Fire to the Stars?” Are you a fan of Thomas’s poetry?

I was actually not familiar with his work. I knew he was a significant literary figure. It was the script. I fell in love with this electric two-hander that jumped off the page. One could anticipate it being overly reverent to Thomas or a stuffy biopic, but it was anything but that. That [director] Andy Goddard wanted to shoot it in black and white provided an exciting vision, and he made it evocative of Dylan’s work in the spirit and tone of the film…that electricity.

What writer, living or dead, would you most want to babysit?

Oh, fuck! I don’t know that I’d want to babysit anybody! I guess I’d love to spend a day with Edgar Allan Poe. I connected with him when I was young because of his macabre worldview and the horror genre. I became fascinated with him as a human, but I’m not sure how pleasant the experience of spending a day with him would be.

The film presents the idea of celebrity worship/infatuation in that John is enamored with Thomas, who continually lets him down. As someone in the public eye yourself, what are your thoughts on celebrity, then and now?

Back in the 1950s, celebrity was not what it is now. Celebrity culture has increased to the levels it has because of social media and the spread of information. People can follow celebrity movements more closely, and personal lives are revealed in a more intense, immediate and direct way, which increases people’s fascination, and feeds into the media machine. I’m in this world to a degree, and I’m familiar with it, but I find it to be quite disturbing.

Thomas is a drinker, an addict, and a partier. John is forced to imbibe Guinness with an egg in it and copious amounts of Pouilly-Fuissé, scotch and other alcoholic beverages. What is your vice of choice?

[Laughs]. I don’t really have vices. Or the ones I have are benign. I’m a smoker—that’s my greatest vice. I love food. The sensual things in life are what I’m attracted to. I don’t drink too much or dabble in drugs.

I’m not that clean-cut!

John is a worrier; he is asked about escorting Thomas, “Have you got the stomach for this?” You tend to play anxious characters. Is this typecasting? Why are you so good at being nervous?

[Laughs.] Shit, I hadn’t thought of that! Is John a worrier? I think he’s someone in over his head. He’s a fan of this poet’s work, and he brings him over with the hope that he can be everything he wants him to be, and glean from him, and he has this romantic ideal, which is far more complicated than he could ever imagine. It’s outside of what he’s capable of. He’s not open to new experiences. That’s what transpires—Thomas changes his worldview.

Flippancy is said to be a character trait of John Brinnin’s. Why do you think he hides behind sarcasm? Is it his repressed (homo)sexuality? His intellectual superiority? Or his disdain for authority? All of the above?

John wrote “Dylan Thomas in America,” and, interestingly enough, doing research on him was difficult, since there was little information about him. He was private, and people didn’t know much about him. His homosexuality is something inferred rather than blatantly revealed…

Yes, only his obituary indicated he died in Key West and was survived by his lover….

Reading his book—his words and seeing how John articulates his time with Thomas provided the framework of a man who was incredibly studious and private and socially awkward and not a vibrant, charismatic individual. He came from academia, and poetry. His world was turned upside down by Thomas.

Yet there is a hypnotic scene where John tells a “horror story” about his childhood in Detroit. How did you find the right tone for that story?

That whole sequence was this thing that was looming on the horizon for 2½ weeks before we shot it. We were all—not petrified—but it was a massive scene for everyone. It was really the only scene where John reveals himself and his vulnerability and personal life experience. It was the only time I could open up about who this person was, and what was lying underneath John, someone who keeps his cards close to his vest. It’s showing his core and the effect that experience [he recounts] had.

Speaking of horror, your career is twisting into thriller roles with films like “Maniac” and “Grand Piano,” as well as “Pawn Shop Chronicles.” Can you talk about your career and moving from child actor to blockbusters to making indie films like “Set Fire to the Stars?”

I don’t know that I have a goal. I’m looking for different experience and new challenges and roles. That’s the guiding principle. I’ve never looked ahead with a plan or road map. I was a co-producer on this, and I’ve got a production company, SpectreVision—we produced “A Girl Walks Home Alone at Night,” and have “Cooties” and “The Boy” coming out soon. Producing and supporting other filmmakers and what we want to do, and that is a huge part of my life now. My process moving forward is very organic; it’s about finding something I respond to as an actor and moving towards that.

Not unlike what Thomas teaches John, which is the importance of feeling. What did this film makes you feel?

Oh, the film has tied into so many things for me! It was a small actor’s piece and it was freeing for me in that regard—to be in something character- and actor-based. I loved the score and the energy. The spirit of the film leaves you with the profound things Dylan has to impart to John—the idea of living openly and opening yourself up to the world around you. Only then can you truly live.