Responding to Dimon's concern that Warren doesn't understand how banking works, the progressive fires back 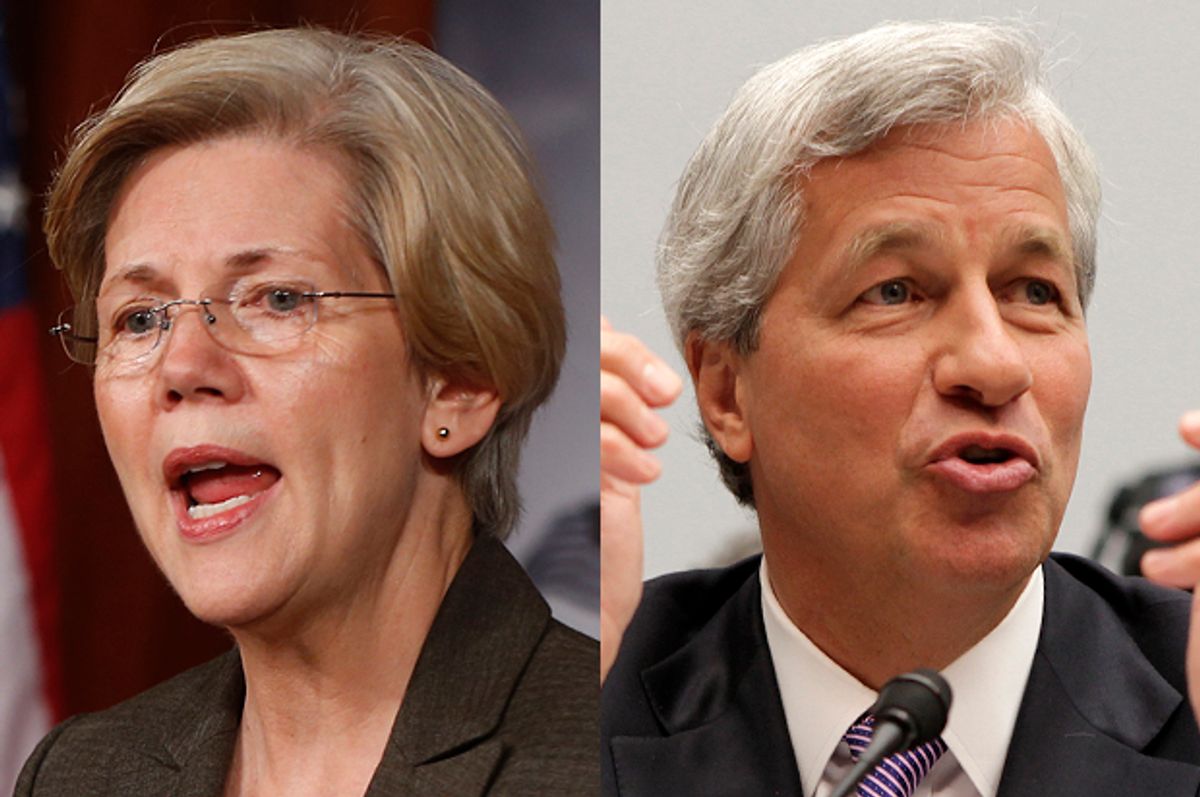 Elizabeth Warren ascended to political stardom with a no-holds-barred willingness to rake Wall Street executives over the coals -- and the Massachusetts senator displayed that trademark grit late this week, in the wake of JPMorgan Chase CEO Jamie Dimon's suggestion this week that the former Harvard Law professor doesn't quite understand how global banking works.

"The problem is not that I don't understand the global banking system. The problem for these guys is that I fully understand the system and I understand how they make their money," Warren told the Huffington Post in an interview posted online Friday. "And that's what they don't like about me."

Warren's pushback came after Dimon, speaking before an audience in Chicago, offered to meet with the Banking Committee member and financial reform advocate to let her know how the world of finance really works.

"I don’t know if she fully understands the global banking system,” Dimon fretted, adding that he did agree with the progressive populist on some issues.

Warren, who led the panel overseeing the 2008 bank bailout and won election to the Senate in 2012 following an unsuccessful effort to lead her brainchild Consumer Financial Protection Bureau, has faced similar criticism before. As Bloomberg noted in reporting Dimon's remarks, during an April speech, Warren related tales of similar condescension from "finance guys."

“The finance guys argue that if you’re never in the club, you can’t understand it, but I think they have it backward,” she said at the time. “Not being in the club means not drinking the Kool-Aid.”

Hoping to see Warren confront the masters of the universe from an even more powerful perch, a group of progressive activists mounted a bid to draft her into the 2016 presidential race. Despite repeated entreaties, however, Warren remained adamant that she would not seek the presidency, and the draft-Warren effort formally ended this week. But while the presidency won't be Warren's come January 2017, she may yet have a new job then, anyway; assuming a Democrat wins the presidency in 2016, there will likely be a concerted push for Warren's appointment to a top administration post -- perhaps even Secretary of the Treasury.