Nashville's Five Knives are the explosive soundtrack to pop's apocalypse 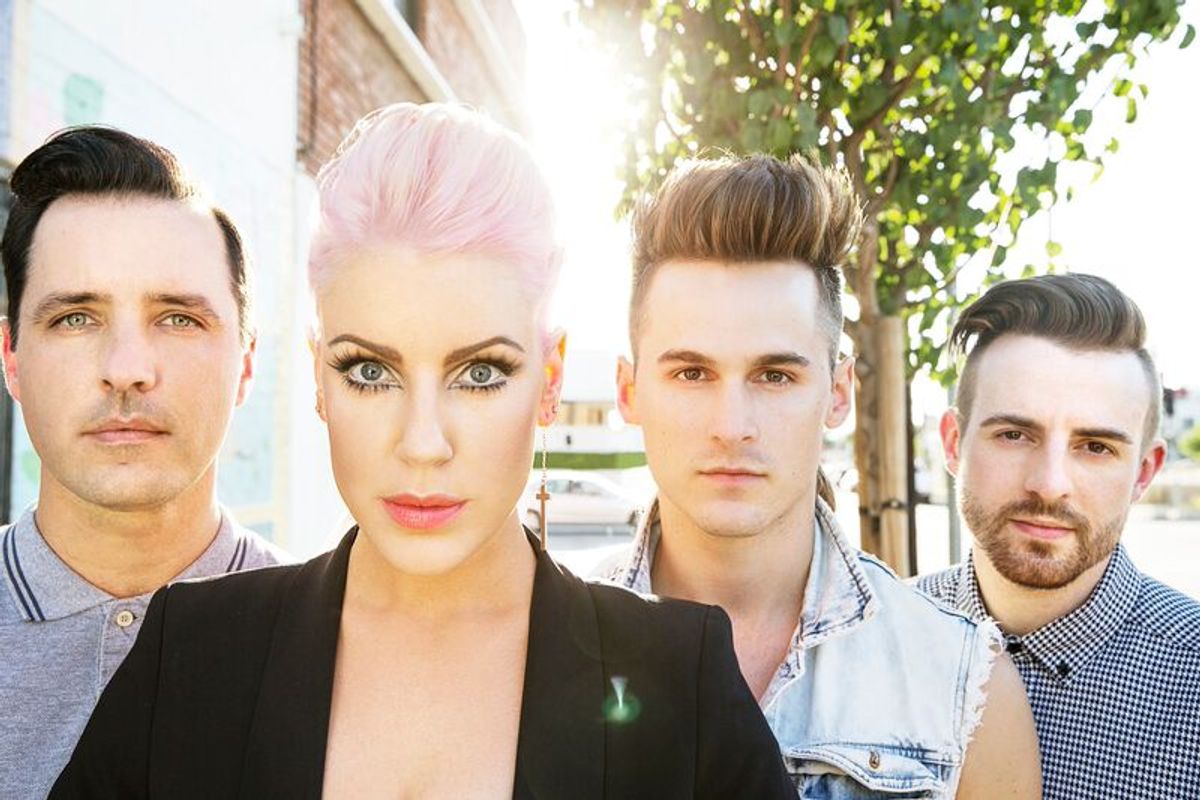 There's a type of dancing people typically do at rock shows. You've seen it.

It's a lock-jawed nodding motion punctuated by occasional upper-body bobs in time with the drummer's kick drum. It enables the concert attendee to hold a drink in one hand with no risk of spilling, but like most things people do in order to keep themselves from looking stupid? It looks really, really stupid.

Last Friday night at Five Knives' -- singer Anna M'Queen, multi-instrumentalists Nathan Barlowe and Zach Hall and drummer Shane Wise -- album-release party at East Nashville, Tn. venue Basement East, the crowd did not dance like that. In fact, the crowd danced like a cross between a warehouse rave with a particularly good drug dealer and the front pew at a gospel church where people are falling out, speaking in tongues and experiencing holy ecstasy -- what some evangelicals call being "slain the the Spirit."

The band's debut album "Savages" came out on Red Bull Records less than a week before the show and already, several fans were singing along, familiar with each song's breaks, breakdowns and musical surges.

On that night in an ostensibly country music town, the crowd at Basement East was a broad range of ages, poly-ethnic, chic-ly attired, and -- in many cases -- colorfully LGBT, which Five Knives' lead singer Anna M'Queen told me hours earlier in a pre-show interview, is a development the members welcome.

"We are absolutely pro-equal rights," she said, and confided: "I'll know I've made it when a drag queen 'does' me."

She paused for a beat, then said, "I might be pissed, though, if she looks better."

That might be hard to accomplish. The former punk singer has created a stage presence like a techno Valkyrie, dressed in leather, armor and tall black boots. In performance, she alternates between fist-pumping punk rage, icy hauteur and an "I dare you" sexual allure that walks the line between a come-on and an ironic send up the whole concept of a "sex kitten."

As the other musicians -- all in black -- thrash away, M'Queen brandishes one of the purest, glass-edged punk screams heard in rock and roll since the short window of time between 1994 and 1996 when Hole was a good band. Then, the singer will abruptly switch gears, sweetly singing a melodic verse before cutting loose into a jagged howl again on the chorus.

Salon spoke to her and Hall backstage before the show and then had a phone conversation with guitarist, keyboardist and composer Barlowe the following week. These conversations have been condensed and lightly edited for clarity.

You are not a very chill person, are you?

Anna M'Queen: In real life I am. I think it’s because I get all my aggression out on the stage.

Is it one of those lead singer dichotomies where you're able to do things with the mic in your hand that you wouldn’t normally do?

AM: Absolutely. I’m not a rascal. (laughs) I’m not that person in real life who is looking for trouble. But, I definitely look for trouble on stage. I feel the emotions on the stage and it’s a caricature and you play it. And you got to play it right and perfect. It’s got to be believable. That’s why sometimes when people meet me afterwards they are like, “You are so chill!”

In the studio, do you have to get in character to record your vocal lines?

How does that work? What is your routine?

AM: I’m alone. That’s for sure. I want to be able to make movements and gestures and do things. Especially during “Take my Picture.” I was full on "in the club." May or may not have had a couple of drinks just to like completely go for it. (laughs) I've got to get in a zone. There are days when you catch it and days you don’t. But when you are on a stage it just comes to you. Definitely. Once that music starts playing, for sure.

Take me through the process of how you write your songs. They have such a live-band push-and-pull, not static like a lot of electronic music. How does an idea go from a demo to one of the tracks on your album?

AM: It’s a lot of writing and it’s a lot of demos. We chose from at least 70 songs. We are constantly writing, constantly throwing out new things. I wish we could have released every single one

Zach Hall: When we do our demos we usually write and produce our music before taking it anywhere. A lot of our songs, before we even put them on the album, were releasable. We had [Producer] Mark [Needham] come in and he added this awesome sound to it.

It was awesome because whenever Anna got in with Mark she already had the songs down because we had done it a million times. She did all the vocals for the record in three days. It was so fast.

AM: One reason we went with Mark was because he was like, “Look, I’m not an EDM producer.” He mixes rock bands. So he kept an edge to it. He didn’t over autotune. He kept everything where it could go, top 40. And it could play on alternative radio at the same time.

Was there an audience in Nashville that was waiting for this type of electronic, danceable music? Or did you really have to fight to connect with people?

AM: Well, Nashville crowds are hard because we live in Music City. Everybody plays an instrument, everybody is a singer, and everybody is just really really good. In order to compete in Nashville you have to be very good at your art. So our Nashville crowds don’t normally come to party, they come to see what they can do better, or take notes. Things like that. But, being in Five Knives I have noticed that our Nashville crowd relaxes a lot more, lets go, parties and is able to just have a good time more, like in a club. That’s really awesome to see, especially in Nashville because it could be so pretentious and uptight sometimes.

But I think in any major city that is so concentrated and saturated in music is just going to be like that. Even L.A., we played a show recently at the Troubadour and we thought it was going to be like that and it was a little bit, but we also saw that crowd let go. We have some aspect in our music where people realize they're here to party.

In the week after the show, Salon spoke with Nathan Barlowe:

Jesus, are all your hometown shows that intense?

NB: That night was amazing. I didn’t know if it was because of the album release or if it was because the night just went off so well. I left there feeling, like, lifted too, like something special happened in there. It was crazy.

On stage and you are such a rock star. Flipping from instrument to instrument, playing to the crowd, it was like watching a mad scientist, in a way. Is this something that you’ve always wanted to do?

It’s so funny because in my past life I’ve been a frontman in rock bands. I was always the singer. I was always the center of attention and the guy entertaining the crowd. When we started Five Knives I really wanted to take a step back.

I’ve known Anna for years, for probably 10 years or more. I always admired her power as a performer. So I wanted her upfront and I was then able to do what I do in the studio, which is play some drum parts, guitar parts, play some keys. For me, it’s so much more fun because I can focus playing all these different instruments during the show. I’m definitely having a blast up there.

I really like the sounds you use. There's clearly a commitment on y'all's part to make things sound fat and full and really distinctive, like 80s bands used to. Bands like Kraftwerk and Depeche Mode couldn't find synthesizers they liked, so they just built new ones. I feel like you have a similar dedication to finding really interesting new sounds.

That comes from me because my favorite two bands in the whole world are Depeche Mode and New Order. That’s definitely my influence. I’m older than the rest of the people in the band. That’s my music and what I love. The great marriage is that Anna brings us more punk rock vibes and Zach brings more hip hop. Shane is just a great, classic metalhead drummer. I basically love anything 80s. I think that’s how that weird mashup of what we are has happened. You got a good ear because I’m obsessed with Depeche Mode.

I feel like what you guys are bringing back into dance music is these very tight song structures that are catchy, memorable, combined with huge EDM beats. It has this genre-hopping power.

Being around Nashville for the past 15 years or so has made us so conscious of songwriting because you are just around the greatest songwriters and storytellers in the world. For me, I always wanted it to be about the song. We can dress it up how we want to, but I always thought the song was the most important thing. Zach and I both come from songwriting backgrounds. That’s how we met actually. We were put together to write a song to pitch to Britney Spears or somebody like that. Like a super girly pop thing. I think we were writing the songs and were both like, “I don’t want to do this.” So we started messing around with an electronic song which later became “All Fall Down,” the first song we ever wrote.

But, that’s what excites me about our band. When you were looking around at our show, and I thought about this, but I was like “Wow. That person is like 60 years old.” And it was a guy dancing and partying. Then there’s bearded hipsters, kids who are obviously outsiders. That’s exciting because it doesn’t mean we honed in on one kind of crowd. We are not just electronic or anything. I find that exciting.

I think great things lie ahead for you guys.

Well, the best thing, I think, is to earn a loyal following where you can sustain a career and learn. We don’t have to be the next whoever the biggest artist is in the world. I want people that are loyal and love our band. Obviously, to make a living too. I think it’s very important to us that people relate to the music.

Watch the videos for the singles "Sugar" and "Savages," embedded below: