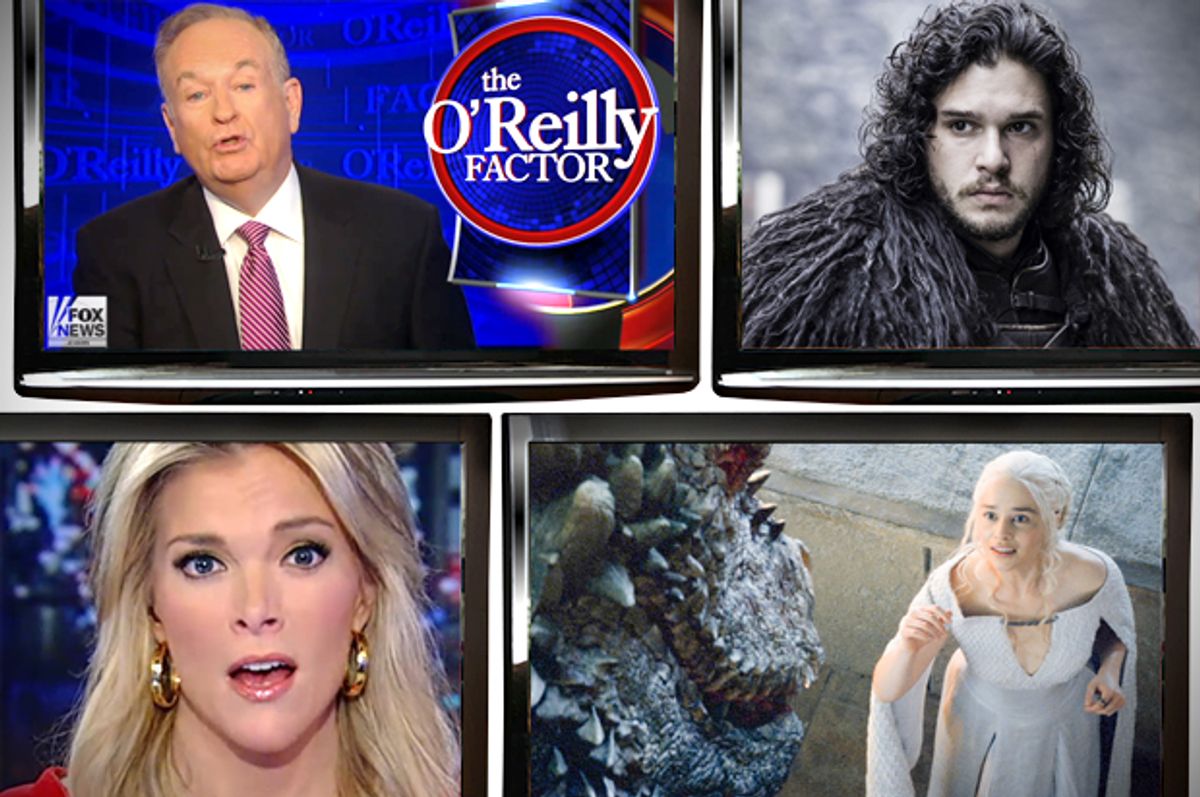 On "Fox & Friends" this morning, co-host Elisabeth Hasselbeck was outraged by those criticizing Stannis Baratheon's decision to sacrifice his daughter, Agamemnon-and-Iphigenia-style, to the Lord of Light. "There's only one true god and his name is R'hllor," she said, adding that "it's a leader's job to make the difficult decisions, and he should be applauded for doing so."

"Of course," co-host Steve Doocy said, "the real issue here is the troops. If Stannis had cut and run, they would have starved, and now they at least have a chance to die brave deaths while laying siege to Winterfell."

"Some people would rather the troops starve than die honorably," Hasselbeck said. "If Stannis tried to return to Castle Black, Shireen still might have died, and even if she didn't, Jon Snow just let a bunch of Wildlings across the border. It's not like she would have been safe there!"

"I think we should talk about that," co-host Brian Kilmeade said. "Who is Jon Snow to be offering all these Wildlings amnesty?"

"No one's talking about the rate of Wildling-on-Wildling crime, either," Doocy added. "It's high -- much higher than in the White Walker community."

Kilmeade agreed, arguing that "some critics" are bashing the White Walkers just because they're white. "We don't really know anything about them," he said, "but we do know that, unlike the Wildlings, they're not using precious resources that could be going to the troops. I'm not saying we should start a #WhiteWalkersMatter campaign or anything, but I'm not saying we shouldn't either."

"Exactly," Hasselbeck replied. "If Snow wasn't feeding those Wildings, Stannis could've marched back to Castle Black after Ramsay Bolton torched his supply. So Shireen's death is really Snow's fault -- not that certain people will ever admit that."

The subject of Jon Snow's complicity in Shireen's death came up again on "The O'Reilly Factor," as host Bill O'Reilly said that although Snow forced his hand, Stannis still managed to prove that he deserves to sit on the Iron Throne.

"He's shown that he can make the hard choices," O'Reilly said, "but they're going to attack him just like they attacked his brother, spreading vicious lies about the paternity of his children, claiming that he was just as much of a drunk on the Iron Throne as he was in his freewheeling youth."

O'Reilly's praise for those who make difficult decisions did not, however, extend to Daenerys Targaryen, "the so-called 'mother of dragons.'" It's not that he believes women should be precluded from sitting on the Iron Throne, he just doesn't believe that Dany "is the right choice to be the first."

"Look what she did in Meereen," he said, "flying off on a dragon's wing the moment things got tough. Is that the kind of person -- male or female -- you want in charge of Westeros? That's the kind of question these people don't want you to ask, and I know they're going to call us 'sexist' for asking it, but we here at 'The Factor' think it's the only question worth asking."

On "The Kelly File," host Megyn Kelly was less concerned with Dany's claim to the Iron Throne than with the disrespectful behavior of another young girl -- Arya Stark.

After playing a clip in which Meryn Trant can clearly be seen treating Arya with excessive force, Kelly said that the real problem is that teens her age are "just disrespectful of authority."

"It goes all the way to the top," she said, "starting with Jaqen H'ghar, who wants her to assassinate a small businessman, and for what? Trying to turn a profit? What's next -- an #OccupyTheIronBank movement? That's not the Braavos I grew up in."

"But Arya Stark, she's no saint either," Kelly said. "She probably goes home every night and thinks about the all the authority figures she'd murder if given the chance. I'm not saying excessive force is ever justified, but good on Trant for putting her in her place."