My concerns may seem quaint today. But I miss the days when we could risk making mistakes without fear of shaming 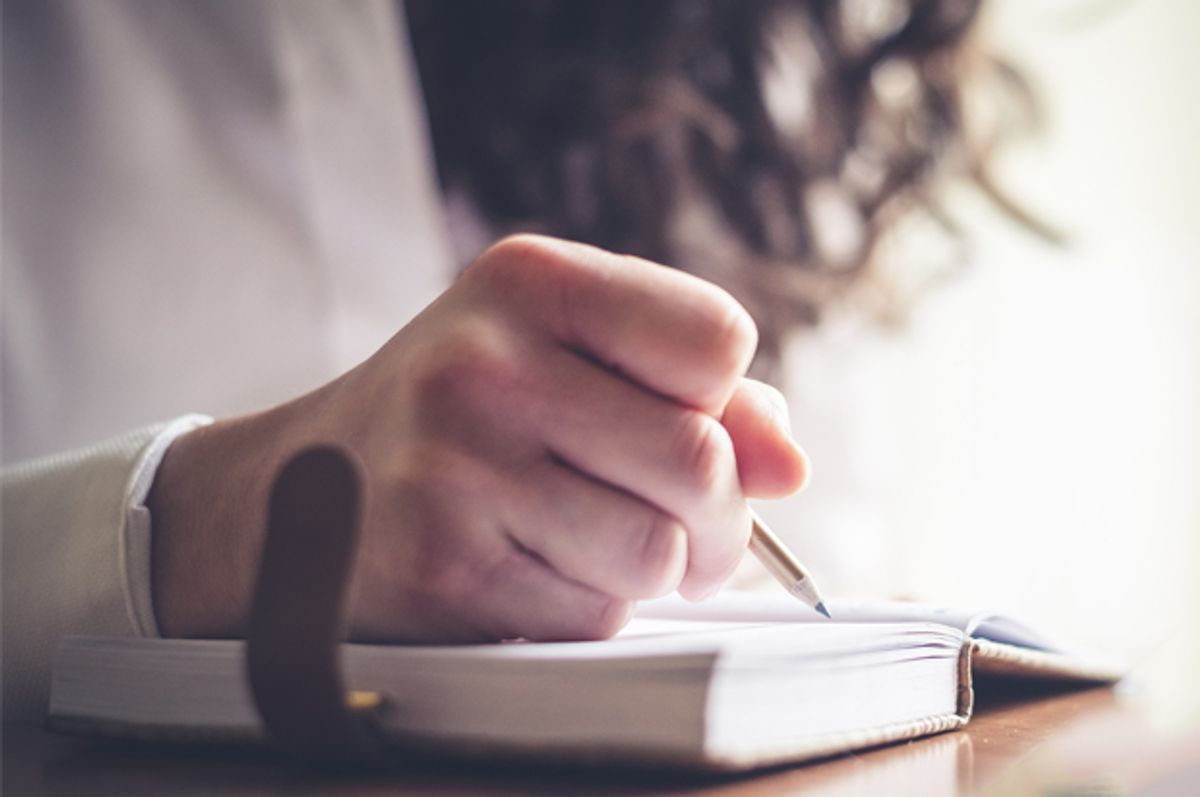 When I was 16, my friend died in a car accident, and at her funeral we were told that one of the last things she’d written in her journal was that she believed in God. This was announced in the church where my friends and I sat in a pew, in tears, among the hundreds of mourners from our town. I looked around at our old classmates and teachers, acquaintances and neighbors and friends of her family. It was so unusual to hear a girl’s private thoughts announced so publicly – as if all of these people had broken the lock on her diary.

This was in the early '90s, before social networking, when it wasn’t uncommon for teenage girls to keep a private journal or diary. My own journals from that time were full of embarrassing plans for self-improvement. I recently discovered a high school notebook I’d filled with rules and directives for myself, with a section devoted to becoming more popular. Among the gems were: "Do not, do not make first honors again!"and "If no boys like you in the first week of school, choose one or two to flirt with and then ask one out." I’d written these things for my eyes only, and the idea of having them discovered and exposed to hundreds of people was not worth considering. But my friend’s reflections were different; she was grappling with important spiritual questions, affirming her beliefs and deciding who she was. We were supposed to understand she’d died a believer and was now in heaven, but I felt uneasy as the words from her journal were read aloud.

My concern about my friend’s privacy probably seems quaint these days. Twenty years ago, this kind of exposure might only happen at a funeral. The biggest audience that most of us were used to were the other 26 kids in our class. But today, with 89 percent of U.S. teenagers active on at least one social media platform, regular self-exposure is part of a typical social life, and teenagers are keenly aware of their online image and audience. Now the types of diverse groupings who listened to my friend’s private revelations at her funeral – the acquaintances, family friends, half-friends, non-friends and that girl from soccer – are all available to any teenager who wants to disclose personal information, day or night.

An argument could be made that adolescents now have a platform for greater self-expression, that they can be seen and heard in ways that were impossible in the past. Their opinions can be commented upon, applauded. The photos they take can be seen by hundreds in seconds. They can also read about the lives of their peers in intimate detail. Certainly, if I were 16 now, I wouldn’t have hand-written a whole journal examining who I was. Instead, I would have spent my time carefully constructing a public profile of the person I wanted to be. Aware of my audience’s judgment, I would have edited my identity, hidden my insecurities, and spent time trying to get good photos of myself doing whatever fit with my desired image. This would take time and thought, and would surely follow me into the real world, as I attempted to live up to (and record) the life I wanted to portray.

While this kind of identity creation can give the individual a sense of control, this control, in truth, is unreliable. A comment you write can be misconstrued. Someone can take a picture or video of you and share it with unknown audiences. There’s now a sense that we’re constantly living on-the-record, and because our words and pictures can be instantly replicated, shared and archived, the ability to fully delete or take something back has become nearly impossible. There’s a lot more at stake when you’re living on-the-record. How can you risk making a mistake? How can you avoid being haunted forever by the things you said or did at 16?

I think of myself at that age with my bushy eyebrows and bad haircut, my weird love of Alice Cooper, and my enthusiasm for the Clintons. I may have been teased here and there, but I was never shamed on a large scale. I could make mistakes, express dumb opinions, and be a fashion disaster without worrying that these things would be publicly linked to me forever. If that had been a possibility – if I’d known that my words and image could have long-term implications – I would have censored myself and taken fewer risks. Would this have changed who I eventually became? Yes, I think so.

Before my friend died, she had the privacy to consider who she was, to think about complicated issues without the need for self-censorship. Although her private words became public and permanent in ways that she couldn’t have intended, she had a freedom in not being aware of her audience – a freedom that few of us choose to exercise today. How we see and understand ourselves has changed so much over the past 10 years, not just for teenagers, but for all of us who take part in the digital world. These days, when I write about my life, it takes place primarily online, in front of an audience that ranges from kindergarten classmates to elderly relatives. None of them needs to know about the types of things I might have delved into in my notebooks: an argument with my husband, my disappointingly bad temper. I post cheerful updates and pictures so I won’t seem miserable or weak. But the problem is I’m only recording a fraction of the truth. I’m pruning away the thorny parts, hiding my controversial opinions. And lately I also find myself unable to share things that bring me great joy. In a place where emotions are magnified for effect – where a new coffee flavor elicits euphoria – how can I authentically record the happiness I had with my infant son this morning?

No doubt in 13 years’ time, he’ll create an online identity for himself, navigating adolescence on a public stage. I hope I can help him find the space and privacy to also develop off-the-record, to explore his beliefs and make mistakes away from an audience. I’ll have to teach by example, setting aside my smartphone, making face-to-face conversations a priority every day. And I’ll tell him the truth: That person online isn’t me.

Lauren Frankel is the author of "Hyacinth Girls."