Back off, thinsplainers! We've heard it all before

Don't feign concern for fat people's health to cover your disdain -- and no, "fat" doesn't have to be an insult 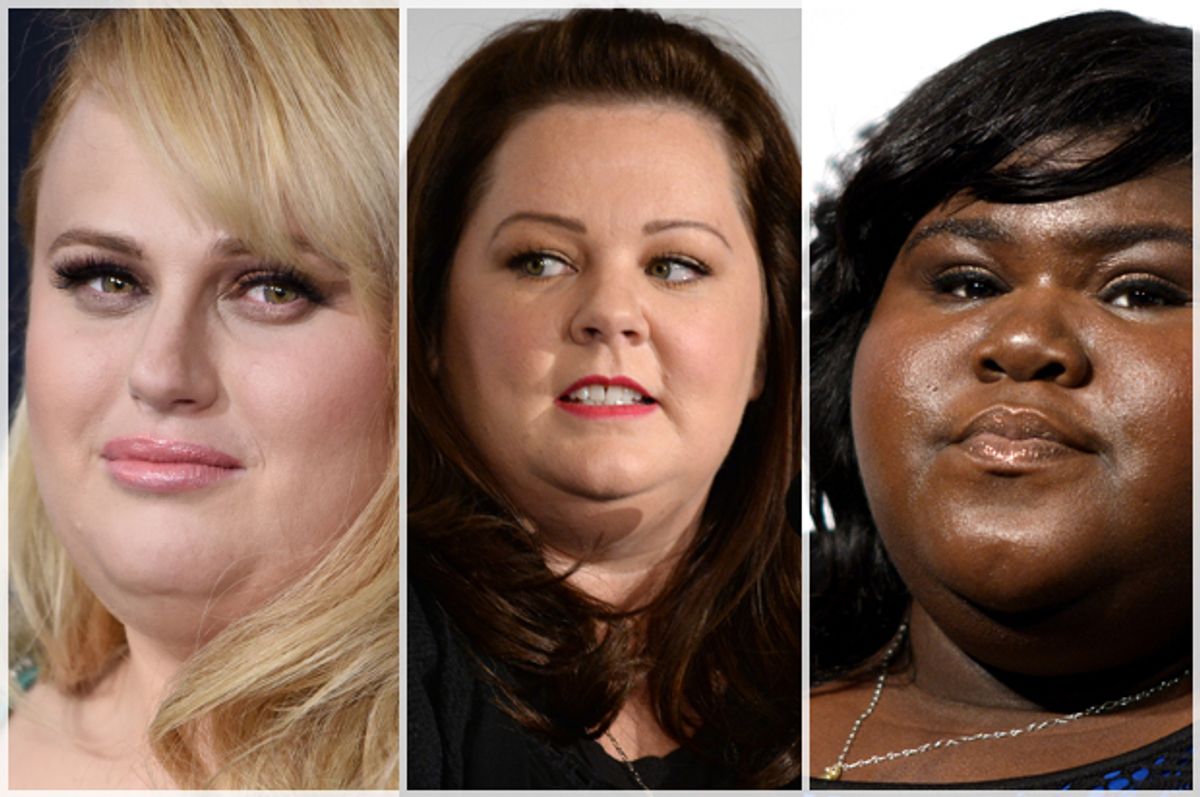 Harriet Brown and Sarai Walker both write about women and weight. Walker’s novel, "Dietland," tells the story of Plum Kettle, a woman (like so many of us) who’s battled with weight her whole life, and who finds a surprising and radical solution to the “problem” of being a woman who doesn’t fit in. Brown’s work of science journalism, "Body of Truth: How Science, History, and Culture Drive Our Obsession with Weight—and What We Can Do About It," tackles many of the myths and assumptions we hold about weight, health and beauty, and suggests ways we can let go of at least some of our preoccupation with the number on the scale. Both writers want to change the conversation around weight. They recently chatted about what it will take to change that larger cultural conversation.

Harriet Brown: One of the similarities between our books is the words we use to talk about weight. Or one word, anyway.

Sarai Walker: People are very uncomfortable with the word "fat." To the general public it’s jarring to hear that word used in a matter-of-fact way, when it’s usually used as an insult.

Brown: I use it about myself, and maybe about other people in a big-picture way. But I probably wouldn’t use it to describe another person unless I knew how they felt about it.

Walker: When I was doing my Ph.D., I registered for a couple of fat studies conferences. And it was a little uncomfortable for me at first. But the name “fat studies” forced me to say it. I went to these conferences and watched the way people used the word without any baggage. When I thought about it, all the alternatives are worse. Overweight, implying there’s an ideal weight.

Brown: Obese, which has become a diagnosis.

Walker: What else is there? Chubby, zaftig ...

Brown: Thick, curvy, heavy. They all seem vaguely insulting to me.

Walker: They’re all just trying not to say the word "fat." Why not use it? The way I talk about it unsettles some people. But that’s not a bad thing.

Brown: It’s part of changing the larger cultural conversation. Changing the rhetoric is one way to start to do that.

Brown: What do you hope people will notice when you use the word "fat"?

Walker: The ultimate goal is to destigmatize the fat body. So to destigmatize that word is a first step. Ideally, to live in a world where different types of body shapes and sizes are all accepted. Where there’s not one that’s the norm and all the others are considered to deviate from that. I’m trying to normalize the idea that fat isn’t this horrible thing. It’s just how some people are. Some people are fat, some people are thin. And what does fat even mean sometimes?

Brown: Like the word "healthy." What does that mean? These are comparative words. They’re not absolute or objective.

Walker: Something as small as a little three-letter word that unsettles people so much is dispiriting. It shows how far we have to go.

Brown: I wonder if you’ve gotten some of the same kinds of feedback I have. I get emails saying, “You’re a horrible person who’s going to be responsible for killing thousands of people because you’re irresponsibly promoting this unhealthy lifestyle.”  I mean, hello — I’m not promoting anything. I’m telling some truths that actually should feel pretty damn liberating.

Walker: NPR interviewed me and did a Facebook post about it, and a lot of the comments were like that. It seems to be the reaction from a large segment of the population. I think it’s hilarious when someone leaves a comment on a review of my book saying, “But obesity is unhealthy!” Do you think I haven’t heard that rhetoric before? I wonder if this a different version of mansplaining.

Walker: So how do you respond?

Brown: It’s like trying to reason with people on abortion. People deeply, truly believe in the justness of their cause. I don’t think most people who jump into this debate really care about fat people’s health and well-being, but I do think they believe fat is a terrible thing, either aesthetically or from a public health standpoint or for other reasons. They believe it so deeply that they can’t hear any other point of view. They can’t have a rational discussion about it. I tend to engage with people once and then leave them to their beliefs.

Walker: There’s so much hatred of fat people, and it’s hard to separate out the real motivation behind these kinds of comments. Is it that they don’t like fat people and they’re covering it up with this health jargon? It adds a layer of suspicion, especially when you see all the abuse fat women get.

Brown: And why do you think people hate fat women so much?

Walker: That’s one of the questions I was trying to answer in the book. It’s totally intertwined with misogynist attitudes. I think fat women are viewed as undisciplined, basically not fitting this mold of what women should look like.

Walker: There are people who just can’t stand it if fat people like themselves. They’re fine if you write an article saying you hate yourself, but if you say you accept yourself that makes them very angry.

Brown: I think it’s about privilege. If a fat person has a good life, then this privilege they’ve either come by naturally or work very hard to maintain is suddenly devalued. Maybe that’s why a lot of the hate of fat women comes from other women. It’s out of fear, like, “I don’t want to catch your fat! Or maybe from a place of privilege, like, “I have to restrict myself all the time, why shouldn’t you?”

Walker: One interesting thing about this whole issue is that so many fat people don’t think of themselves as permanently fat. They’re always on their way to being thin. That’s one barrier to change. Fat people think, “Those other fat people can accept themselves, but I’m going to be thin.” Fatness is so stigmatized an identity that even people who are fat don’t want to accept themselves.

Brown: Unlike a lot of other marginalized groups, who take pride in their group identity.

Walker: It’s not like race, where you absolutely can’t change it. People always think fat can be changed.

Brown: Even though the evidence shows over and over that most people can’t. So what do you think we need to do to move the conversation forward?

Walker: I have heard from some women who said reading my book has radically transformed the way they look at their own bodies.

Walker: Books like yours and mine, the "Fattitude" documentary that’s in the works. There are so many other things happening now to expose people to these ideas.

Brown: When I was growing up in the 1960s and '70s, there was only diet culture. There was no voice anywhere saying, “Hmmm, maybe it’s OK not to diet or be thin.”

Walker: When I was an undergrad in the 1990s and every celebrity who was fat, like Ricki Lake or Carnie Wilson or Oprah, they were all trying to lose weight. Now we have Beth Ditto, Rebel Wilson, Gabourey Sidibe. There are still hurdles to overcome, but it’s so much better than when we were growing up.

Brown: And that gives me hope. Change happens slowly, and this kind of change comes from the individual level and percolates up. I like to think we’re part of the process.

Harriet Brown is associate professor of magazine journalism at the S.I. Newhouse School of Public Communications at Syracuse University. The author of the award-winning "Brave Girl Eating: A Family’s Struggle with Anorexia," she has written for the New York Times Magazine, O Magazine, Psychology Today, and Prevention, among others. She lives in Syracuse, New York.