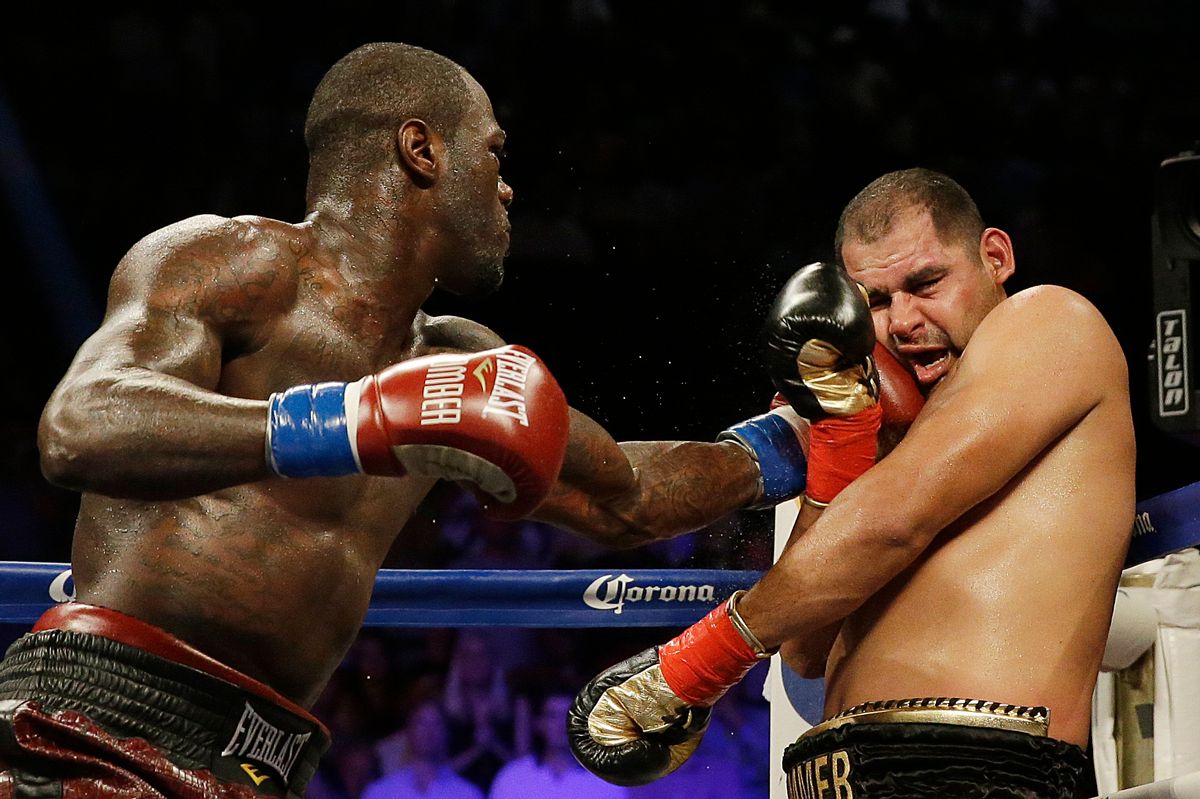 BIRMINGHAM, Ala. (AP) — Deontay Wilder gave his Alabama fans what they expected in his first WBC heavyweight title defense: a knockout.

It just came later than many expected, including Wilder.

Wilder successfully defended his WBC heavyweight title with a ninth-round knockout of Eric Molina on Saturday night at Bartow Arena, a short drive from his hometown.

Wilder (34-0) delivered a right hand that turned Molina around and sent him falling on his back. The referee quickly signaled that the fight was over, probably several rounds later than many observers anticipated with Wilder a heavy favorite.

"I was really surprised he kept coming and hanging in there," Wilder said. "A lot of people said he wouldn't even be around, he wouldn't last. There were a lot of doubters, but he showed a lot of heart and I needed that kind of guy to fight here in Alabama.

"A lot of people at the fight tonight were first-timers so I wanted to put on a good show. When you have a tough guy with a lot of heart in front of you, that's what you're going to get."

The 6-foot-7 Wilder knocked down Molina (23-3) in the fourth and twice again in the fifth, practically running across the ring after him before Molina went down the third time. The Texan withstood barrages to the head in the sixth from Wilder, and then came back strong two rounds later, landing some hard body shots.

But the fight ended 1:57 into the ninth.

Wilder became the first American heavyweight to claim a piece of the title with a Jan. 17 unanimous decision over Bermane Stiverne. That came after Wilder had recorded 32 consecutive knockouts within the first four rounds.

This one went deep, too, against Molina, whom some oddsmakers had installed as a 50-to-1 underdog. He was trying to become the first Mexican-American heavyweight champion.

"A lot of people didn't think I had a shot but they had no idea what I was coming with in my heart," Molina said. "I knew this was my opportunity, and I have no regrets. I left it all in the ring. "

Wilder is hoping to fight twice more in 2015, ultimately seeking a matchup with Wladimir Klitschko, who owns the other belts. He proclaimed afterward this title defense will be the "first of many."

Wilder, who had surgery on his right hand after the Stiverne fight, delivered some of his best blows with the left hook. He landed 141 of 303 punches (47 percent). Molina connected on about three-quarters of his power punches in his last fight, but was 49 of 188 overall (26 percent) against Wilder.

More known for his powerful right hand, Wilder knocked Molina down with a left hook in the final seconds of the fourth moments after the crowd began chanting "Deontay." Molina, who teaches kids with disabilities full-time, said he twisted his left ankle after one of the early knockdowns.

He didn't question the referee's decision to stop the fight, but thought he could have kept going.

"It was two good shots and I went down, and I was going to keep getting up until he really put me to sleep," Molina said. "I got up and felt like I was fine, but that's what they pay the referee to do. He did his job, and I'm fine with that."

Molina appeared to shake Wilder up momentarily with a right in the third.

"It was a couple-second buzz and then I came back to the fight," Wilder said. "It was a great shot. I definitely wasn't hurt at any time in the fight."

The match about an hour from Wilder's hometown of Tuscaloosa was his first fight in Alabama since 2012, and the state's first title fight in any weight class. Not surprisingly, the sellout crowd on the UAB campus was almost exclusively cheering for Wilder, booing Molina whenever he was shown on the video screen before the fight.

Don King, Molina's 83-year-old promoter, stood in the center of the ring waving a number of flags in the air during the pre-fight introductions.

Four-time heavyweight champion Evander Holyfield, who was born in Atmore, Alabama, was in the arena.

Wilder had no complaints about the evening.