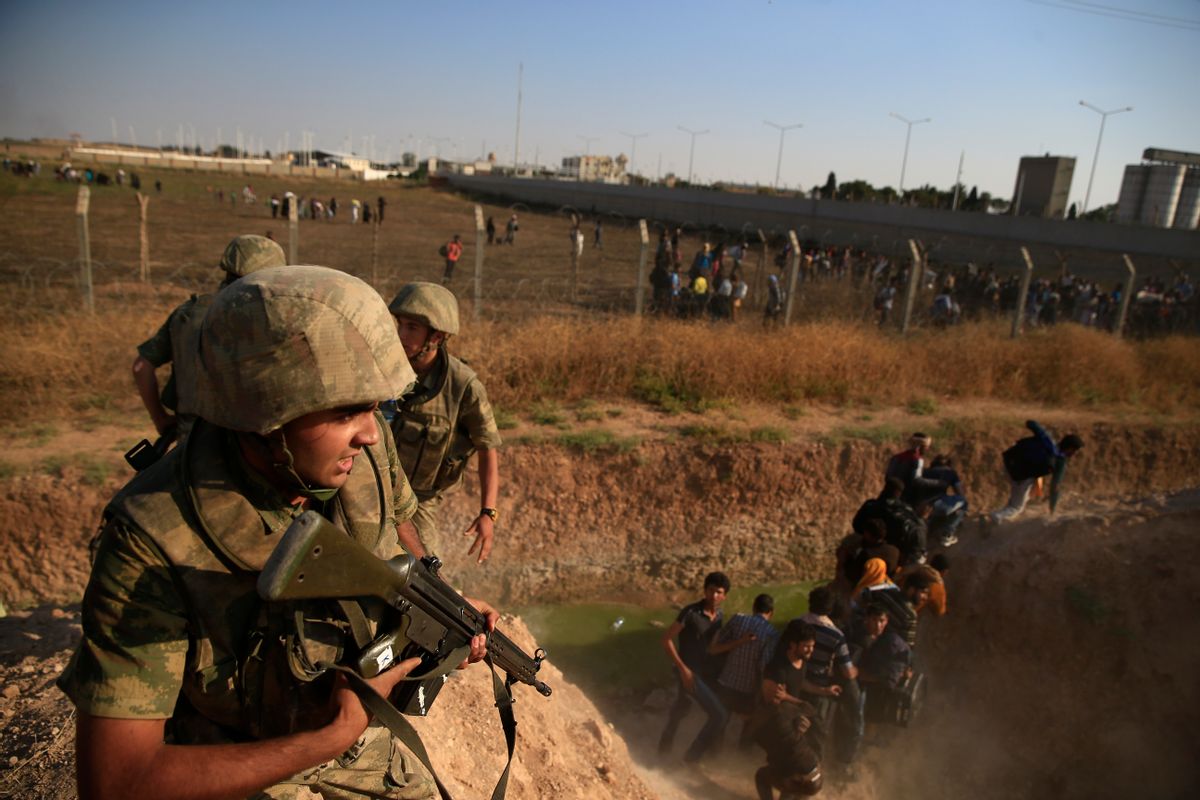 Turkish soldiers run to control Syrian refugees crossing into Turkey from Syria after breaking the border fence, background, in Akcakale, Sanliurfa province, southeastern Turkey, Sunday, June 14, 2015. Thousands of Syrians cut through a border fence and crossed over into Turkey on Sunday, fleeing intense fighting in northern Syria between Kurdish fighters and jihadis.The flow of refugees came as Syrian Kurdish fighters closed in on the outskirts of a strategic Islamic State-held town on the Turkish border. (AP Photo/Lefteris Pitarakis) (AP)
--

Thousands of people cross into Turkey as Syrian Kurdish fighters close in on the outskirts of a strategic Islamic State-held town on the Turkish border.

2. US LAUNCHES AIRSTRIKES ON AL-QAIDA LEADER IN LIBYA

Warplanes target Mokhtar Belmokhtar, a terror chief accused of leading a 2013 attack on a gas plant that killed at least 35 hostages, including three Americans.

3. WHO HAS MUCH TO PROVE ON EVE OF PRESIDENTIAL ANNOUCEMENT

Jeb Bush remains unpopular among some of the GOP's most passionate voters and little known beyond his home state of Florida, despite his family name.

The short-messaging service has never turned a profit, and its user base of 302 million is dwarfed by rivals such as Facebook, which counts 1.44 billion.

The Philae lander is receiving enough sunlight to charge its batteries and communicate with scientists on Earth, more than 300 million miles away.

6. HOW INMATES ACQUIRED TOOLS TO MAKE THEIR JAILBREAK

Richard Matt and David Sweat, who remain on the loose, apparently got their hands on contractors' power tools, and received some help from prison worker Joyce Mitchell, to escape an upstate N.Y. lockup.

In interviews with The Associated Press, James Boulware's father recalled his son's seething anger at police after losing custody of his child.

The new research suggests patients should be pushy about getting follow-up care so they don't have to return to crowded emergency departments.

Christian Pham of St. Paul rose to the top of 219 card players, including a few poker icons, by winning a game of lowball, which he inadvertently entered.

The fourth film in the dinosaur series rakes in a staggering $511.8 million in its first days in theaters.