Sen. James Inhofe says the Pope "ought to stay with his job," while Rick Perry has this ISIS thing all figured out 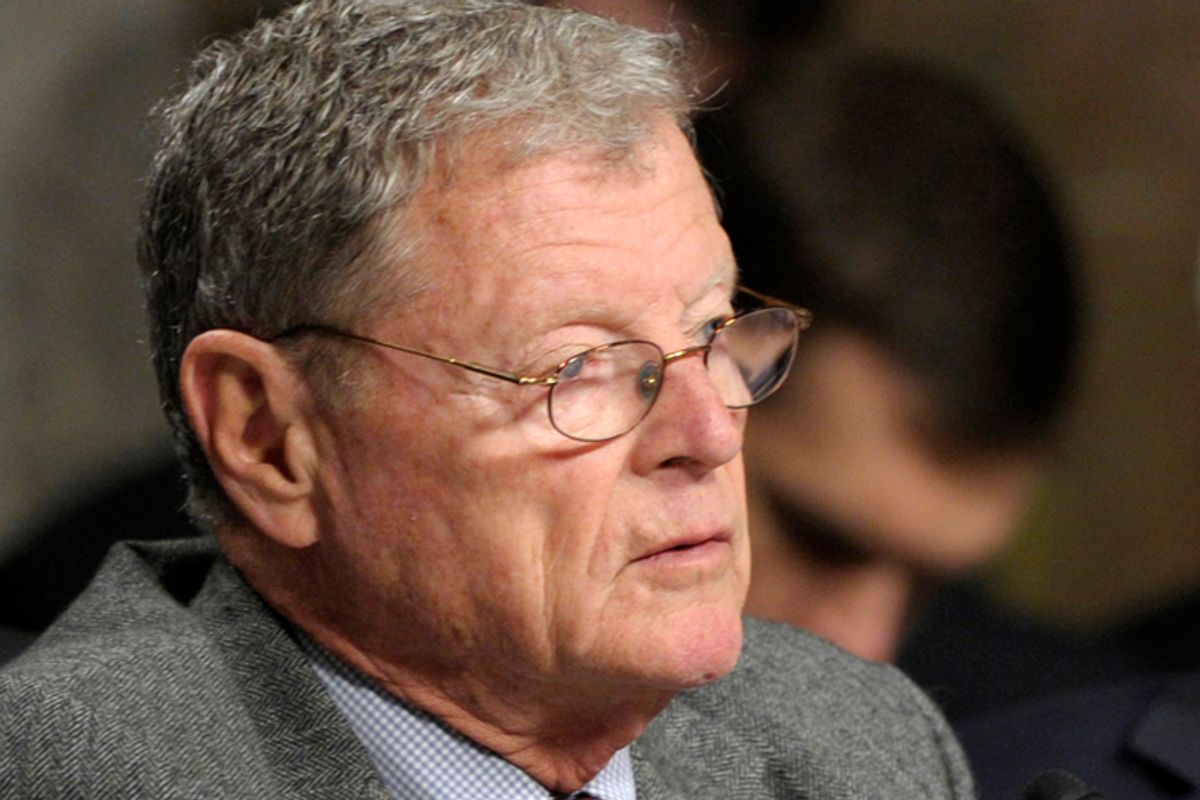 Times are tough for climate change deniers, what with the Pope about to issue his encyclical urging the world to do the right thing and fight the earth’s man-made annihilation.

But snowball-tossing, climate-change-denying, Senate-environmental-committee-chairing James Inhofe doesn’t take his marching order from the popular pontiff, he takes his marching orders from his oil and gas industry pals at the Heartland Institute. They needed a pep talk, and Inhofe gave it to them.  His message: the Pope doesn’t stand a snow ball’s chance in hell of convincing him and his conservative friends in Congress that the planet is warming and we ought to do something to stop it. He addressed his fellow climate skeptics while wiping sweat from his brow on the 92 degree June day in the hottest year on record. Behind him, an endless video loop of his infamous snowball stunt. Take that, Pope Francis.

Afterward, he told reporters, “Everyone is going to ride the pope now. Isn’t that wonderful. The pope ought to stay with his job, and we’ll stay with ours.”

Which apparently is taking lots of money from the carbon-producing industries and ensuring that their will be done.

Who needs scientists when you have politicians like Republican Assemblywoman Shannon Grove to point out the connection between legalized abortion and rain? While speaking to anti-abortion activists, Grove put two and two together and came up with 935, or perhaps an imaginary number. If you want to see an end to California’s drought, pass more restrictions on abortion. Makes perfectly logical sense.

It’s not like she lacked empirical evidence for her seemingly outlandish claim. "Texas was in a long period of drought until Governor Perry signed the fetal pain bill,” Grove said,  as reported by RH Reality Check. "It rained that night. Now God has His hold on California."

Clearly, she would like to see Texas-style abortion restrictions in the Golden State, to which we can only say, oh God, no.

Later, on Facebook, she backed away from this patently absurd that even some anti-abortion groups were trying to distance themselves from. Instead, she asserted that liberal politicians are also to blame for the drought.

“I believe --and most Americans believe --that God’s hand is in the affairs of man, and certainly was in the formation of this country. The Founders put God in the center of this nation by recognizing Him as a giver of our rights. Is this drought caused by God? Nobody knows. But biblical history shows a consequence to man’s actions; we do know for sure that California’s water shortage crisis has been compounded by liberal politicians’ poor decisions - not properly managing our water resources and refusing to build water storage for decades.”

But the abortion connection was out of the barn and enjoying well-deserved mockery from pro-abortion rights groups, including Pro-Choice Kern Count which posted a mock T-shirt design on its Facebook page that said, "I made a desert with my abortion and all I got was this lousy T-shirt."

3. Megyn Kelly thinks only saints should not be tackled by aggressive cops.

“Clueless white girl” Megyn Kelly wasted no time in blaming the 15-year-old black girl tackled, straddled and sat on by an out-of-control white McKinney, Texas police officer. The whole situation was bad, but it must be noted (why? no one know) that the girl was “no saint either.” What makes her no saint, either? The fact that she lingered after the cop told her to scram. This is important commentary because as everyone knows, the Constitution says that only saints are entitled to civil rights, and not be roughed up by police. Fortunately, there are vey few saints in this country, and among those non-saints are black teenagers, so it’s okay to brutalize them.

But all the criticism of Kelly’s comment really pissed her off.  She had, after all, said that the cop’s actions were brutal. Why is everyone picking on her? She is so doggone tired of people who “distort innocuous comments to promote their own agenda.”

Because she has no agenda. She is the fair and balanced truthseeker we all need to follow and never criticize.

4. Rick Perry points out how much more qualified he is to fight ISIS than Obama is.

The world can rest easy if Rick Perry somehow gets elected president. That’s because the erstwhile Texas governor has the very thing Obama lacks in the fight against ISIS: executive experience.  Also, a proven ability to connect important dots.

But wait, doesn’t being president for 6 years count as executive experience? We would give you Rick Perry’s answer to that question, but we are unable to burrow into his thick skull. It is possible that he does not exactly know what the word "executive" means.

Perry sounded off about Obama’s leadership during an interview with conservative radio host Dana Loesch. The president had made the alarming admission that the U.S. doesn’t “yet have a complete strategy” for training Iraqi soldiers to defeat ISIS “because it requires commitments on the part of the Iraqis as well about how recruitment takes place, how the training takes place, so the details of that are not yet worked out.”

Big mistake! Perry pounced, saying the president is has “a hard time connecting the dots from time to time.”

Perry has a demonstrated record of always being able to connect the dots. He’s very good at those puzzles where you, say, make a horse, by connecting them.

5. Pat Robertson officially and dramatically goes off the deep end.

Uncle Pat has told a bunch of whoppers in his day, but he killed it this week by coming up with possibly the most outlandish answer to the question posed by a woman whose co-worker lost her three-year-old child.  What should the woman say if the co-worker asked her, “Why did God allow my baby to die?” she asked the TV pastor.

Robertson hemmed and hawed and pointed out that it just might be possible that God was not the one who let the baby die, a strange gambit for the right-wing Bible thumper who once suggested faith healing could bring dead babies back to life. Maybe the hospital screwed up—sometimes people are the “ones making mistakes.”

Then a thunderbolt struck and the televangelist suggested a whole other line of argument. What if this child had grown up to be Hitler? Maybe God had really done everyone a solid since he is all-seeing and all knowing.

All of this is sure to make that grieving mother feel much much better.