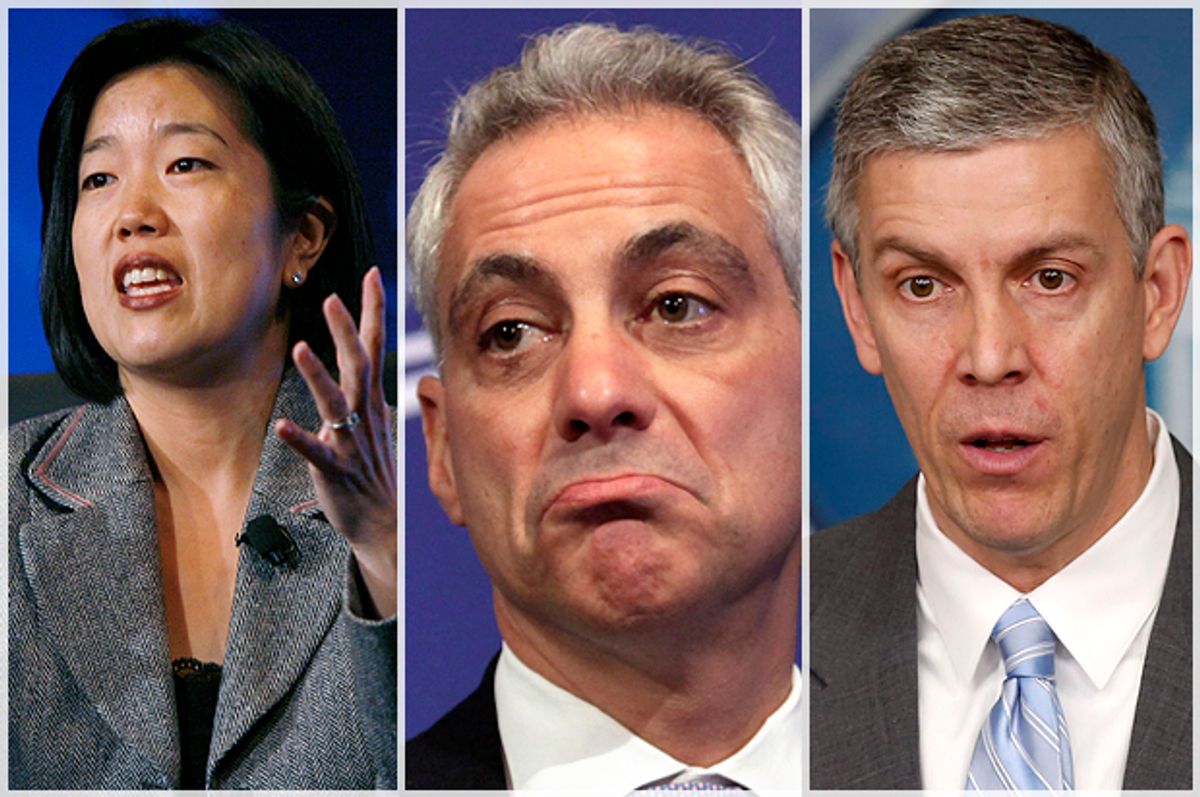 Among lefties today, there may be no more toxic and discrediting a label than “neoliberal.” To be called a neoliberal is, generally, to be associated with the worst of capitalism’s excesses — Wall Street greed, union-busting, deregulation, standardized testing, wage theft, privatization, exploitation and so on. In some ways, it’s become a catch-all term of abuse for those who are seen as little more than lackeys for the 1 percent and multinational corporations.

For the purposes of political combat, that’s fair enough. In truth, though, neoliberalism isn’t just another word for “corrupt” or “hyper-capitalist”; it’s a specific political ideology, one that’s much younger than capitalism — and one that plenty of people who are basically pro-capitalism oppose. What’s more, if those of us who oppose neoliberalism misinterpret it as simply another word for capitalism, we make the job of fighting it even more difficult. Franklin Delano Roosevelt was a capitalist, after all. But a neoliberal, he most certainly was not.

This is just one of the many reasons why “Undoing the Demos: Neoliberalism's Stealth Revolution,” the latest book from political theorist and University of California, Berkeley, professor Wendy Brown, is so valuable. Not only does the book offer a sturdier intellectual framework with which to understand neoliberalism, but it also helps detail why the problems of neoliberalism and the problems of capitalism are not necessarily the same. And why neoliberalism may, in fact, represent a much more serious threat to American democracy.

Recently, Salon spoke over the phone and emailed with Brown to discuss her book, the essence of neoliberalism, and why it is both a practical and ideological threat to not just progressivism but democracy as we know it. Our conversation is below and has been edited for clarity and length.

To start simply, I’d like to ask you, what is the “demos”?

“Demos” is the Greek term for “the people,” and it’s important for us because it’s the root term for our word “democracy.”

"Demos kratia" — “people rule” — is really the term that, however differently it’s been interpreted over different variations of democracy and different centuries, is one that we all cherish on some level. Demos is important because it’s the body, it’s the people, that we imagine are in control of the basic conditions and laws that govern our lives.

And how do you define neoliberalism? It’s not uncommon for me to experience people I’d consider neoliberals telling me the term is meaningless.

I think most Salon readers would know neoliberalism as that radical free-marketeering that comes to us in the ‘70s and ‘80s, with the Reagan-Thatcher revolution being the real marker of that turn in Euro-Atlantic world. It means the dismantling of publicly owned industry and deregulation of capital, especially finance capital; the elimination of public provisions and the idea of public goods; and the most basic submission of everything to markets and to unregulated markets.

So free enterprise is its clarion call, and even though it requires a lot of state intervention and state support, the idea that goes with it is usually also minimal state intervention in markets. Even if states are needed to prop or support or sometimes bail out markets, they shouldn’t get into the middle of them and redistribute [wealth]. That’s all true. That’s certainly part of what neoliberalism is.

But it’s not the only thing it is?

Along with many others, I argue that there is something else about neoliberalism that we really need to attend to, which is the way it operates as a whole form of reason. By that, I mean that it is an understanding of the world and of the human beings within it as nothing but markets — and an understanding of human beings as fully reducible to market actors. Everything we do and everything we are, we are simply acting as market creatures. This is what is really novel about neoliberalism, because classic economic liberalism understood us as behaving as market actors in markets but then going off and behaving differently in domains of ethics or politics or religion or family life and so on.

What is the relationship between that neoliberal reason and undoing the demos?

Even more than the extreme inequalities and empowerment of capital that neoliberalism brings about, it’s the casting of every sphere of existence and every phenomenon as a market — and human beings as nothing other than market actors — that undoes democracy.

When human beings are wholly reduced to market actors, the very idea of a self-ruling people vanishes. On the one hand, the demos is literally dis-integrated into bits of human capital, each preoccupied with enhancing its individual value and competitive positioning. So the idea of popular sovereignty becomes incoherent—there’s no such thing in a market. On the other hand, democratic political life reduced to a marketplace loses its distinctive value, cadences and coordinates. It ceases to be a domain of deliberation about how we should live together, and of sharing and equalizing power to determine common values and ends.

Instead, political life is figured as a domain of competing capitals, appropriately deregulated, and with no guarantees of equality among them. So, neoliberalism undoes the very idea of democracy as depending on distinctively political forms of freedom, equality, personhood and popular sovereignty. Democracy and markets, always in high tension, can (barely) coexist if the essential elements of democracy are ardently nourished and protected. But democracy cannot survive being reduced to market values, terms and practices.

I think people have a good sense of what neoliberal policy changes look like. But what does it mean, in practice, when we see all human activity as essentially market-based?

It’s an understanding of us and the things we do as being ways of simply enhancing our value as bits of “human capital.”

One sees it very clearly, for example, in education today, where instead of thinking about educating citizens for the value of democracy or civilization or simply being educated people, everyone thinks now of education — and especially higher education — as simply an investment in one’s own individual future as a bit of capital that wants to enhance its value, become worth more, and become capable of earning a higher income.

What does that self-investment look like in the real world?

I think the important thing to grasp about neoliberal reason now is that it’s intersected with something else that we can call “financialization.”

So while the early neoliberals were forecasting and hoping to promulgate what they called an “entrepreneurial society,” where everybody understood themselves as an entrepreneur, what financialization has done is to transform the figure of human capital — the idea of the individual human capital entrepreneur — to transform that figure into one of self-investment. Instead of thinking how do we take assets that we have and entrepreneurialize them, we think today in terms of, How do I take a set of possible experiences or possibilities and use them to enhance my human capital, to enhance its present value and its possible future value?

What’s an example of that process?

Each thing the child does — whether it’s volunteering at a charity in order to build up the résumé in order to look like a good civic citizen, a hardworking, willingly civic human being; or whether it’s an unpaid internship where one is simply using the internship in order to enhance one’s appearance of experience and knowledge and networking — becomes a way of making herself more attractive to future “investors.”

I’m putting this into very concrete economic terms; but I have to say, whenever I talk about this with undergraduate classes, the groans are audible.

Which makes me wonder — are we looking at a future where the reason of neoliberalism suffuses every nook and cranny of society? Or are we in it already?

I think it’s certainly ubiquitous. What’s striking is how thoroughgoing it is after a mere 30 years, particularly in the world of education, where rankings and ratings have just become the do-or-die for every kind of institution, including K-12. It’s what the testing madness is about, where schools fall or rise according to test scores. There is no question that we are living in this [neoliberal] world; but I think there is a question about whether it is all that we are living with. The very fact that we can still see it … suggests that we are seeing from somewhere else.

I’m also struck by the fact that when I talk with my students about being bits of human capital, they are miserable by that idea. They hate it. Even the ones who are really striving and really committed to their human capital enhancement. They want something else. They want something more. That suggests there are still other rationalities or discourses organizing us besides simply neoliberalism.

I’m reminded of that famous David Foster Wallace fable about the two fish who come across a third, and the third says something along the lines of how nice the water was that day and then swims along. And after the third fish is gone, one of the two turns to other and says, “What the hell is water?”

Right. If we were completely conquered by neoliberalism we wouldn’t be able to see it. We would simply say, This is reality.