Students of medieval history and politics — like George R.R. Martin — have seen this ritual humiliation before 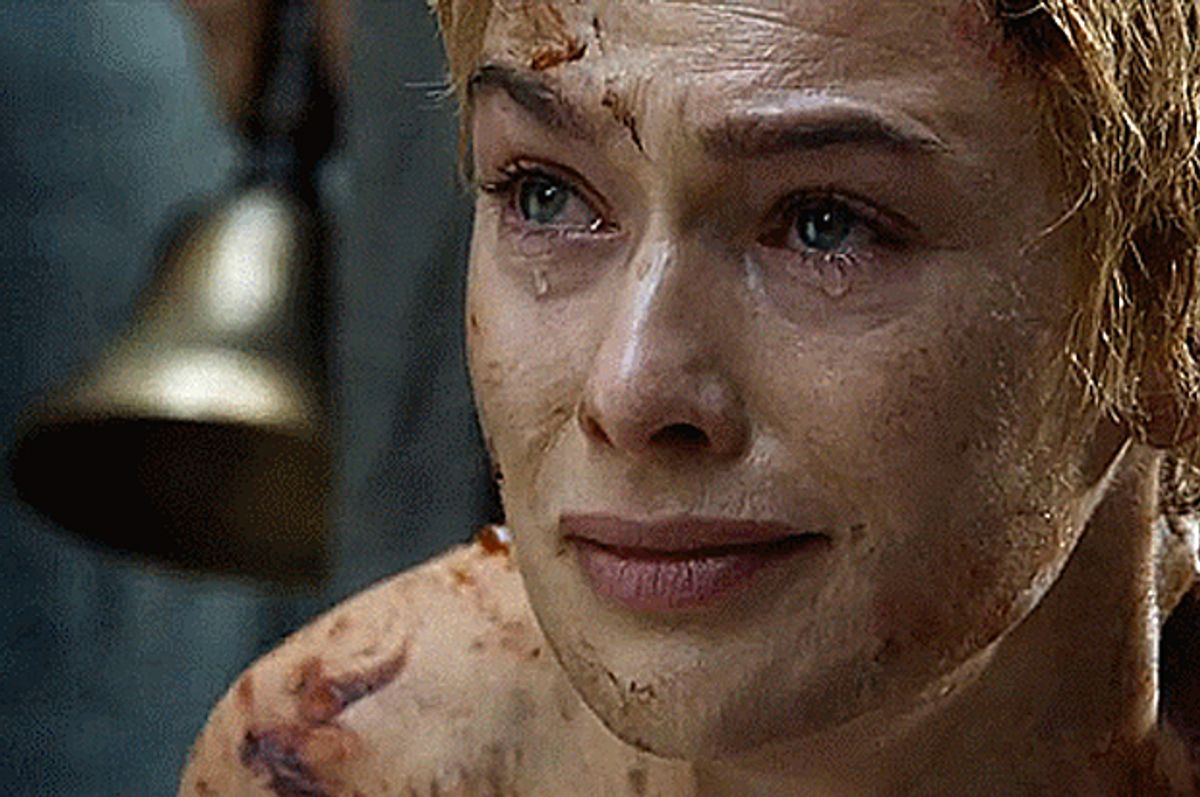 A woman steps out into harsh, bitter sunlight. Naked and shorn she faces a public that only weeks before feared her, revered her, heralded her every move, and worshipped her as their Queen, or Queen Mother. Publicly shamed she affects contrition and begins her penance. Each step is agony on her bare feet; each movement is torment to her limbs, weakened by starvation and dehydration. She steps gingerly through puddles of filth and feels the slime of the street upon her skin as she winds her way through the narrow city streets thronged with people who taunt her, hurl insults and rotten food at her. But this is her only option: Confess to fornication, endure public humiliation and shame or face death, execution as a traitor—an even more shameful end. So the people see her naked, so they stare at the body that has given birth to kings. This she can endure.

This is the punishment Cersei Lannister was subjected to in Sunday’s episode—but its roots run much deeper than just George R.R. Martin’s imagination. In the medieval period, adulterers were often subjected to exactly this punishment—a naked walk through crowded streets—not as torture but as a lasting consequence for their sinful behavior.

The image of a publicly shamed adulterer is a thread that runs through medieval literature, as well. From Guinevere’s ill-fated romance with (no naming coincidence here) Lancelot to actual French customary laws, images that reflect Cersei’s ordeal are abundant. For in medieval law, the point of humiliation was to brand the offender, not with a burn but with a lasting reputation of ill repute. Cersei doesn’t bear a scarlet letter, but the shame is the same.

Her procession is the public spectacle of the shamed, her reputation in tatters; an inversion of Lady Godiva, whose nudity was covered by her hair and the public prohibition against peeking. The city is summoned to witness her shame, for what good is public penance if the public does not witness it?

Cersei’s punishment echoes numerous medieval literary accounts of public humiliation for adultery. In a faint echo of Lancelot, Lancel Lannister—incestuous lover-turned-religious fanatic—will actually accuse the Queen to ease his own conscience. But in the case of all queens who fornicate with someone other than their king, Cersei is also guilty of treason (not to mention the regicide of planning Robert Baratheon’s untimely demise) and the charge of treason would generally have resulted, finally, in public execution—which does not bode well for Cersei, even after her confession. Like Guinevere, one of the most famous adulteresses in medieval literature for her disastrous liaison with her husband’s best knight, Lancelot—whose mauvaise renommée (bad reputation)resounds through the centuries, Cersei’s reputation will suffer from this spectacle more than she realizes.

The most important aspect of this is the idea of fama—Latin for "fame", "reputation", or "good name" which had several equivalents in medieval vernaculars. In French: renoun, renommée, nom; in English: name, worship; in Italian: rinomanza (rarely used), riputazione, notorieta, famigerato, etc. The standing of individuals before the law was often based on their reputations, what others thought of them, and how they behaved in public. With nobility, personal reputation was often equated with the reputation of the Nation. These distinctions of having a good or bad reputation governed the legal existence of most people—common and noble—in the Middle Ages. As such, when someone was accused of a crime, their fama was used as either evidence for or against them.

But crimes could also affect a person’s fama—public crimes had public consequences. The Old French customary law, the Coutumes de Beauvaisis (1283), the Etablissements de Saint Louis (ca. 1257), the Counseil a un ami (1253), and the Occitan Costuma d’Agen (13th century) all address the issues of good name and notoriety as proof and social standing. People were generally assumed to be of bonne renomee (good reputation) until they showed that they were not. If someone was found guilty of a particular crime, then their fama generally suffered as a result and they would no longer be deemed trustworthy or honorable members of society and if they transgressed again, their previous crimes would be held against them.

In cases of adultery—only one of the charges levied against Cersei in the form of "fornication"—a person’s reputation could be one proof. Though proving adultery was tricky business in the Middle Ages. In the southern French province of Agen, adultery had to be proven by witnesses who caught the lover in the act. The witnesses themselves had to be above reproach, very specifically, the local judge and two council members. Ordinary citizens would not do. Once the crime of adultery was established, the guilty party was punished by public humiliation: the man and woman were roped together naked and forced to walk through the town preceded by trumpeters for all to see and even beat with clubs if they wished. An image of this punishment, of two lovers bound naked, flanked by trumpeters in procession survives in a manuscript of the Costuma d’Agen: Agen, France, Archives Départementales de Lot-et-Garonne, MS 42, fol. 42v. The woman was always the center of the punishment. If the man could escape before, or even after, arrest he could get off without any kind of punishment. If not, then he had to face the punishment with his partner. But if he did, his partner had to face her punishment alone.

It is this kind of very medieval punishment to which Cersei is subjected in the Season five finale of "Game of Thrones." She is told that it is the only way to save herself; but she has doubts and wonders if there isn’t an ulterior motive. She is right to doubt. Because admitting to her crimes—confessing—leaves her open to further charges of murder and treason, charges that cannot be answered by this public humiliation.

Medieval literary sources bound with examples of legal trials where charges of adultery are adjudicated. In a variety of literary sources, Guinevere faces a number of similar accusations, mostly of murder and adultery. In Marie de France’s "Lanval," the hero is tried for soliciting Guinevere (when it was the other way around) and for claiming that his faery lover is more beautiful (which she is). Later versions of Marie’s tale, like Thomas Chestre’s "Sir Launfal," capitalize on her reputation as an adulteress. In Thomas Malory’s "Le Morte Darthur" (1471) she is tried for adultery and found guilty. About to be executed by public burning (for treason rather than adultery), Guinevere is saved by Lancelot who charges in, sword swinging. Of course, his rescue kills more of Arthur’s faithful knights, who were unarmed and trying to protect Guinevere, and so the fateful trajectory towards tragedy continues. Out of remorse for their affair and his part in the dissolution of the Round Table, Lancelot does become a religious hermit like Lancel, but Jaime is more likely Cersei’s Lancelot. It is this kind of rescue that Cersei envisions—Jaime charging in at the last moment to save her from her public indignity. Unlike Guinevere, Cersei’s Lancelot does not arrive.

But Guinevere isn’t always guilty. In the fourteenth century "Stanzaic Morte Arthur," that Malory’s adapts, when Guinevere is falsely accused (for once) of poisoning a knight at her table, publica fama works against her. Just as queens like Eleanor of Aquitaine (c. 1124 – 1204) and Isabeau of Bavaria (c. 1370 – 1435), rumored to have had an affair with her brother-in-law Louis of Orléans, were tainted by allegations of adultery, Guinevere’s reputation among the knights is tarnished by their perception of her relationship with Lancelot. In legal proceedings, publica fama—the testimony of two reputable witnesses that the accused was widely believed to be guilty, or capable of guilt—was probable cause to charge someone with a crime and elicit a confession. In the decree Qualiter et quando of the Fourth Lateran Council (1215), Innocent III perfected the inquisitio where clamor et fama [public outcry] replaces the accuser and the judge conducts the case, presumably after publica fama had been proven.

Guinevere, like Cersei, has the option of a "jury trial". English literary audiences would have recognized the importance of a jury trial. The Assize of Clarendon (1166) established the grand jury system in England that used the ordeal of water in the actual trial until its abolition in 1215; a full jury trial took its place under Henry III. For the English, justice was enshrined in the Magna Carta, signed (reluctantly) by King John June 15, 1215—800 years ago. To a late-fourteenth/early fifteenth-century audience, Guinevere’s fears were justified. People believed that juries could be bribed, so trial by battle was often preferable, even though there was a certain amount of skepticism regarding the efficacy and justice of judicial duels. In the folklaw tradition the judicial duel was the last resort and could not be used when there was a clear presumption of guilt or witnesses of good reputation who swore for or against the defendant. It is a prominent literary motif, but judicial combat was designed to prove the truth of the defendant’s oath, not necessarily innocence. Guinevere does not trust the justice of a jury of knights, most of whom thought so ill of her that they believed she was capable of murder. Nor does Cersei trust the septas or the Faith to administer justice (it doesn’t help that Cersei is very, very guilty).

What Cersei does agree to was a relatively common form of medieval punishment in cases of adultery. Contrary to popular belief, adulterers were rarely subjected to more violent of brutal punishments and torture could only be used to extract a confession from people of low repute. The earliest body of evidence for the application of new inquisitorial procedures, which may have included torture, dates from Paris in 1210. In France an ordonnance of Louis IX in 1254 allowed it, but forbade the torture of "honest people of good reputations, even if they are poor" on the basis of the testimony of a single witness, "the formal ‘half-proof’ of general Romano-Canonical procedure." By the fourteenth century in France, the king’s procurator stepped into the place of the old accuser, "or the more recent fama, judge, or denunciatio, "and torture, part of the extraordinary procedure, was the routine procedure for serious crimes. Torture was illegal in England, except in extraordinary cases determined by the king and only on his authority, which seems to rarely have been given.

Cersei's punishment seems, to the modern viewer, to be woefully inadequate for the crimes that we all know she has orchestrated. But what will be the lasting consequences of Cersei’s public humiliation? She cannot recant a confession that was witnessed by thousands in her walk through the city. Does she think that by engaging in this public spectacle that she can simply return to her vaunted position of power and privilege? Not likely. In medieval law, the whole point of the public humiliation was to permanently brand the offender, not with a burn upon the skin, but with a visual performance of the confession, to establish the publica fama. Cersei should find reintegration into the royal affairs of King’s Landing very difficult. But that is up to George R.R. Martin, HBO and the writers of Season 6.

A version of this essay originally appeared on the Longwood University website.

Dr. Larissa Tracy is an expert in Old and Middle English language and literature, and torture and punishment in literature of the medieval world. She co-directs a research conference in medieval studies and has published extensively on the topic. She has been featured in documentaries for the Discovery Channel and NatGeo, and has lectured internationally.