"Game of Thrones" finale shocker: What we saw, what we didn't see, and what it all might mean 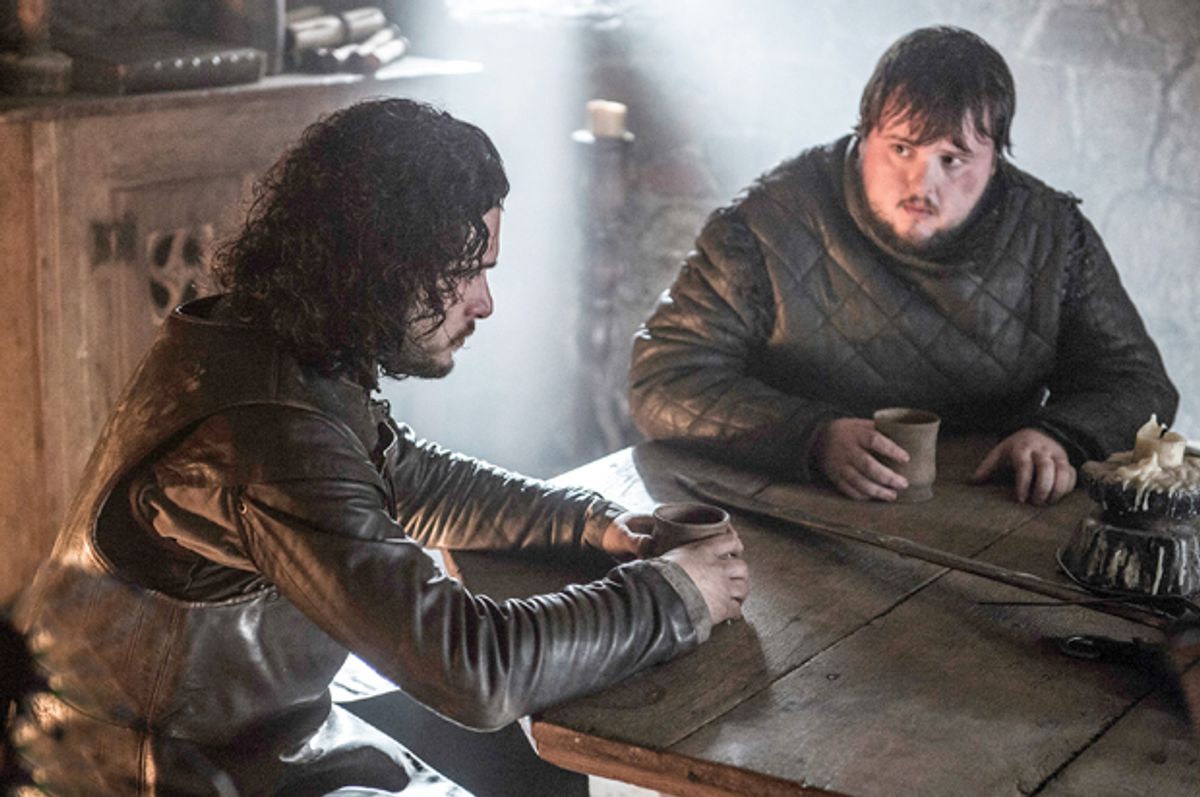 This post contains plot details for last night’s finale of “Game Of Thrones,” “Mother’s Mercy,” as well as speculation for future plot points that include details from “A Song Of Ice And Fire.”

Last night’s finale of “Game Of Thrones” ended with a bang. Jon Snow (Kit Harington), a main character since the very first episode, is stabbed to death by a cadre of his Night’s Watch brothers. “Game Of Thrones” is hardly averse to killing off major characters, but even for this series, Jon’s murder seems like a step too far. It happened in the books, but most fans did not take it too seriously—and indeed, George R.R. Martin himself has teased that Jon Snow will return.

And yet here’s Harington, in an interview with Entertainment Weekly that posted immediately after air (emphasis mine):

I had a sit-down with Dan and David, we did the Tony Soprano walk [letting an actor know they’re being whacked]. And they said, “Look, you’re gone, it’s done.” And as far as the salary thing goes, that angered me when that story came out. I don’t know where it came from, but it was inaccurate in many ways. It’s going to put questions into your head and into fans’ heads that things are not what they are. Quite honestly, I have never been told the future of things in this show, but this is the one time I have. They sat me down and said, “This is how it is.” If anything in the future is not like that, then I don’t know about it – it’s only in David and Dan and George’s heads. But I’ve been told I’m dead. I’m dead. I’m not coming back next season. So that’s all I can tell you, really.

And there’s this article, too, also from Entertainment Weekly: "When asked point-blank of Snow is firmly gone—as in, is actor Kit Harington released from his Thrones contract?—showrunner Dan Weiss told EW, 'Dead is dead.'"

Even for hardened skeptics like myself, this is a lot of proof against what is otherwise storytelling 101: No one’s dead until you’ve really seen the body. This is doubly true for the worst villains and the most beloved heroes. Yes, his blood is slowly pooling beneath him and staining the snow. But what happens directly thereafter? Couldn’t something roll by to change everything? There’s a reason that the show’s last major deaths—such as season three’s Red Wedding, in the episode called “The Rains Of Castamere,” or the beheading of Ned Stark, in season one’s “Baelor”—happen in the ninth episode of the season. That’s the penultimate episode, which gives the show one more episode to process the death—one more episode to make sure it hits home.

In the few years book readers have had to process this death, they’ve come with some ideas as to what might have happened to Jon Snow. As neat it would be to just have him dead, killing him is a lot harder than just stabbing him in the stomach a bunch of times, because hey, we’re in Westeros. Melisandre, a priestess of the Lord of Light, is right there—imbued with powers that we already know can raise people from the dead, as Thoros of Myr did with Beric Dondarrion a whole bunch of times in season two. Of course, she declined to resurrect Stannis in this episode, so maybe she’s not feeling up to it. But that could happen, especially if Melisandre becomes (more) convinced that it’s Jon, not Stannis, who is the one who was promised, Azor Ahai himself. In that case, maybe Jon dying is in fact part of the whole process of becoming Azor Ahai, not that we know what that would be, exactly, except a lot of sacrifice seems necessary.

Still, taking into account Harington’s emphatic remarks that he is dead and not returning, let’s use a different explanation. Recall, if you will, that Jon has had mystery swirling about him for the last five seasons of the show (and the last five books of “A Song Of Ice And Fire”)—both with regards to his murky lineage and tossed-about prophecies about his destiny. The direwolves are literally magical; Bran has demonstrated the ability to enter the mental state of his wolf, Summer, and has further been able to use that on others, such as the simpleminded Hodor. In the books, Arya and Jon both exhibit the ability to do this as well, although they mostly experience it as vivid dreams. Other characters also have the ability to be wargs, which is the Northern word for a kind of mental shapeshifter. So Jon could “warg out”—while his physical form dies, he could survive in the form of his direwolf Ghost, or tap out into another form. This could explain Jon Snow still being alive, but Kit Harington not being the actor who plays him. Like, maybe Jon Snow is going to be a CGI direwolf next season. (Or a real direwolf, if they can find one. HBO has methods.)

The showrunners seem intent to communicate that Jon is dead—meaning that maybe even warging out or being resurrected by Melisandre are off the table. But in the final moments of last night’s finale, creepy Maester Qyburn revealed a huge guy in armor that is, I shit you not, the reanimated corpse of Gregor Clegane, who will now go by the silly moniker Robert Strong. (Qyburn, as it turns out, is a kind of nuts necromancer.) So there are some other ways to raise the dead. Indeed, there is this magical force on the other side of the Wall that casually turns the dead into reanimated ice zombies on the regular. Jon Snow’s body becoming one of the White Walkers’ Others could get around that whole “dead” thing. Presumably the Night’s Watch would burn that body so it wouldn’t become an ice zombie—but we don’t see it on screen or on the page. And if we haven’t seen it, everything’s on the table.

After all, Jon Snow is almost definitely the illegitimate son of Rhaegar Targaryen and Lyanna Stark, which would make him a pretty significant contender for the Iron Thrones and/or the person to save the whole world, especially if all of Rhaegar’s mutterings in the books about “the prince that was promised” bear out in some capacity. Even if you’re a show-only fan, there’s an awful lot of foreshadowing about Jon’s parentage in the first season of “Game Of Thrones,” and Barristan Selmy delivers some storytelling about Rhaegar and Lyanna to Dany. It just seems like killing him off would ruin a lot of what the story has been trying to accomplish, especially just as Tyrion’s presence in Meereen has indicated quite strongly to the viewers that as Dany has not just one dragon, but three, each one could use a dragonrider.

And even Jon’s oath to the Night’s Watch, the one that would preclude him from marrying or holding any sort of political power, has a convenient clause in it, right in the second sentence: “Night gathers, and now my watch begins. It shall not end until my death.” OH HEY, DO YOU SEE WHAT THEY (MAYBE) DID THERE.

I have to admit that while most of the storytelling logic around Jon Snow’s death indicates his survival, the show has killed off some lingering, almost-dead characters that the books have maintained: Lady Stoneheart, Mance Rayder, and even, with this episode, Stannis Baratheon. But the books pile a lot of foreshadowing and arcane lore onto Jon Snow’s whole existence. And though the show has broken with some character arcs, Jon’s has been remarkably faithful—the showrunners guessed Jon’s parentage while first plotting out the show with Martin, and Martin confirmed they were right. Jon Snow looks dead, but he’ll be back. We will have to watch Kit Harington’s hair, in the meantime, to see if it remains recognizably Snowy.