Hillary Clinton's rendezvous with history: She's returning Dems to their liberal roots -- but will it work in 2016?

Her first big 2016 rally showcased New York, FDR and the liberal optimism she and her party muted for too long 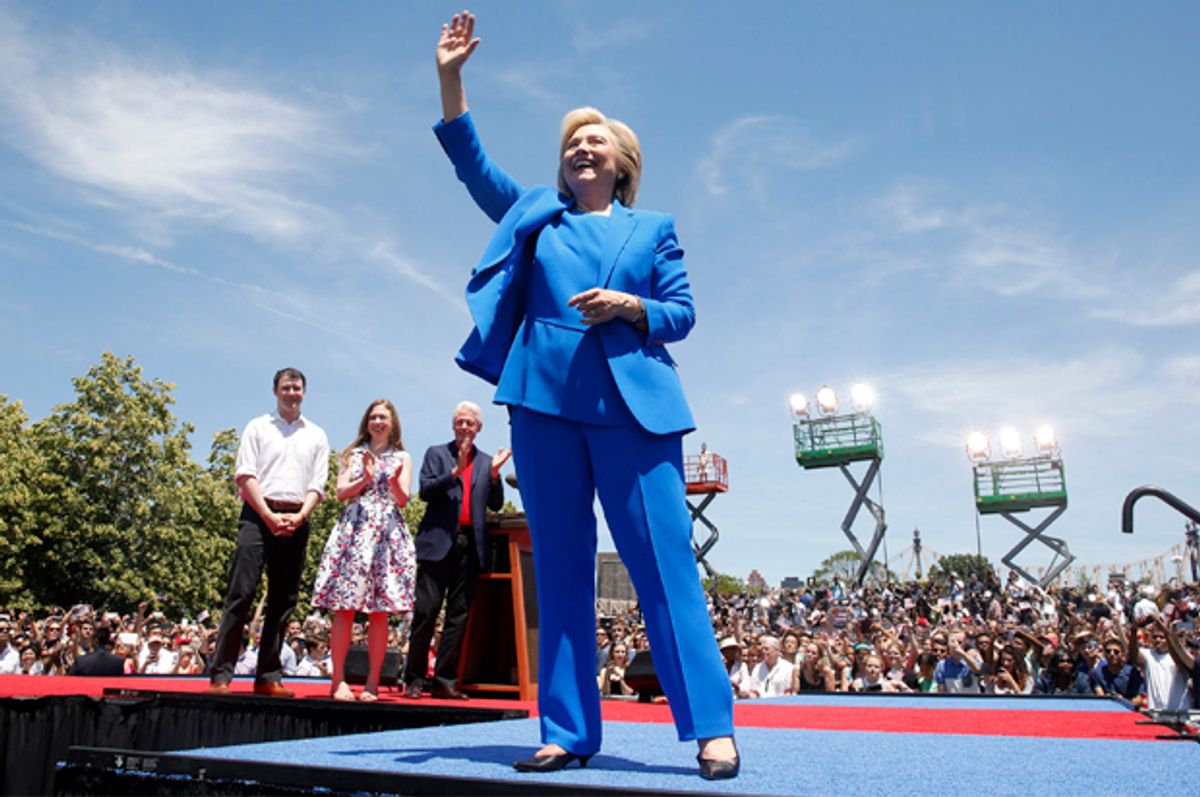 Hillary Clinton’s first campaign rally felt like a coming out party for a woman who’d been shoved in a closet back in the 1990s and hadn’t seen much daylight since. Wonkish Hillary, liberal Hillary; the Eleanor Roosevelt admirer; the Children’s Defense Fund attorney. That’s who promised an adoring crowd on a bright sunny Saturday, in the Franklin D. Roosevelt Four Freedoms Park, that she’d bring back “an America where if you do your part, you reap the rewards; where we don’t leave anyone out, or anyone behind.”

We didn’t get to know this Hillary while her husband was president, especially after the failure of the healthcare reform project she led. She was too feminist, too liberal, too all around off-putting to be much help to her husband’s effort to rebrand the Democratic Party with a common sense centrism that wouldn’t frighten away white Southern men. The Clinton operation looked for ways to sand off the First Lady’s rough edges, mostly with her cooperation. She traded policy for writing books about Socks and Buddy, the Clintons’ pets.

We didn’t see much of this Hillary during her 2008 presidential campaign, either. She was still trying not to scare away the dwindling numbers of white working class voters left available to Democratic Party appeals.

Of course, if you don't like her, this version of Hillary Clinton is all head and no heart; all about polling data and electoral college math that show a successful White House run requires that she consolidate the Obama coalition, and leave the (Bill) Clinton coalition behind. As an often-vexed admirer of Clinton, I see it as her finally being her real self. The question is, can this Hillary Clinton become president, or will the GOP turn her into a scary Frankenstein monster of liberalism, a cross between Eleanor Roosevelt and Barack Obama?

So much tired commentary seeks to place Clinton on a spectrum defined by Elizabeth Warren on the left. By placing herself squarely in FDR's camp, she reminds us that these struggles have had a much longer history -- and that history shows Democrats have a record of sharing prosperity and opportunity, as she noted FDR did, while fighting "special privilege for the few."

Clinton’s 45-minute speech wasn't just a look backwards. It hit all the sweet spots of modern liberalism, supporting immigrant rights and LGBT rights, promising action on climate change and college affordability. She attacked Republicans for policies that “blame and shame” women, an implicit jab at Jeb Bush’s recently-excavated effort to bring back “public shaming” of single mothers and adulteresses.

There was plenty of economic populism, too, as she railed against an economy that’s seen most gains go to the rich.

“Prosperity can’t be just for CEOs and hedge fund managers. Democracy can’t be just for billionaires and corporations. Prosperity and democracy are part of your basic bargain too," Clinton said. "You brought our country back. Now it’s time -- your time to secure the gains and move ahead.”

MSNBC’s Alex Seitz-Wald ably identified five big details Clinton left out of her speech here, so I don’t have to. We’ve yet to hear where Clinton stands on the Trans-Pacific Partnership trade agreement, expanding Social Security, the fight for a $15 minimum wage, or exactly how to rein in Wall Street. On the other hand, it seems unrealistic to expect her to upstage herself by coming out for or against, say, the TPP on her first big day.

Even the event’s setting, on Roosevelt Island with the backdrop of the Manhattan skyline, felt bracingly risky. New York was the laboratory of the New Deal in the years before the Depression, the birthplace of child labor laws and health and safety regulations and so much more. Then it wound up as Ground Zero for liberalism’s meltdown, synonymous with good intentions gone bad: crime, overspending, the welfare state run amok. The legendary 1975 Daily News headline, “Ford to City: Drop Dead,” summed up the country’s attitude to its profligate cultural capital, just as Clinton was coming of age politically. For years Democrats, too, ran away from, and even against the city.

Clinton reclaimed New York as part of the Democratic Party story, and FDR’s New Deal liberalism, too. FDR harnessed the power of government to transform the country; Bill Clinton told a cynical nation that “the era of big government is over.” Though Hillary herself promised “smarter, simpler, more efficient" government, inspired perhaps by Stan Greenberg’s advice about how to reach government wary white working class voters, she left no doubt that she saw government as a way to right the wrongs of the last 30 years.

I heard, and read, lots of criticism of the speech as less than soaring, lacking the high notes regularly hit by Barack Obama. I liked it better than the critics did, but to the extent that particular rap on the speech is true, it may be a plus. One thing I liked about Clinton even back in 2008 was that she knew how hard it was going to be to get anything done, up against the modern GOP. Obama seemed to believe in his own power to preside over a post-partisan country where he united not just Democrats but Obamacans. That didn’t happen, and voters may find Clinton’s plainspoken promises to work hard reassuring.

“I’m running,” she said, “for everyone who’s ever been knocked down, but refused to be knocked out.” It was hard not to think of the 2008 presidential candidate left for dead politically after a damaging battle with an indomitable rival.

But I also thought about the vanquished Democratic Party, forced by Republicans in the 70s and 80s to run away from so much of its legacy: the New Deal, Social Security, labor protections; all the post-World War II scaffolding that built the world’s largest middle class.  Clinton was reclaiming not just her own old liberalism, but the party’s. It was like watching the Democratic Party recover its past, leave witness protection and resume its life.