After weeks of silence on the agreement, Clinton and her campaign weigh in -- but don't provide any clear answers 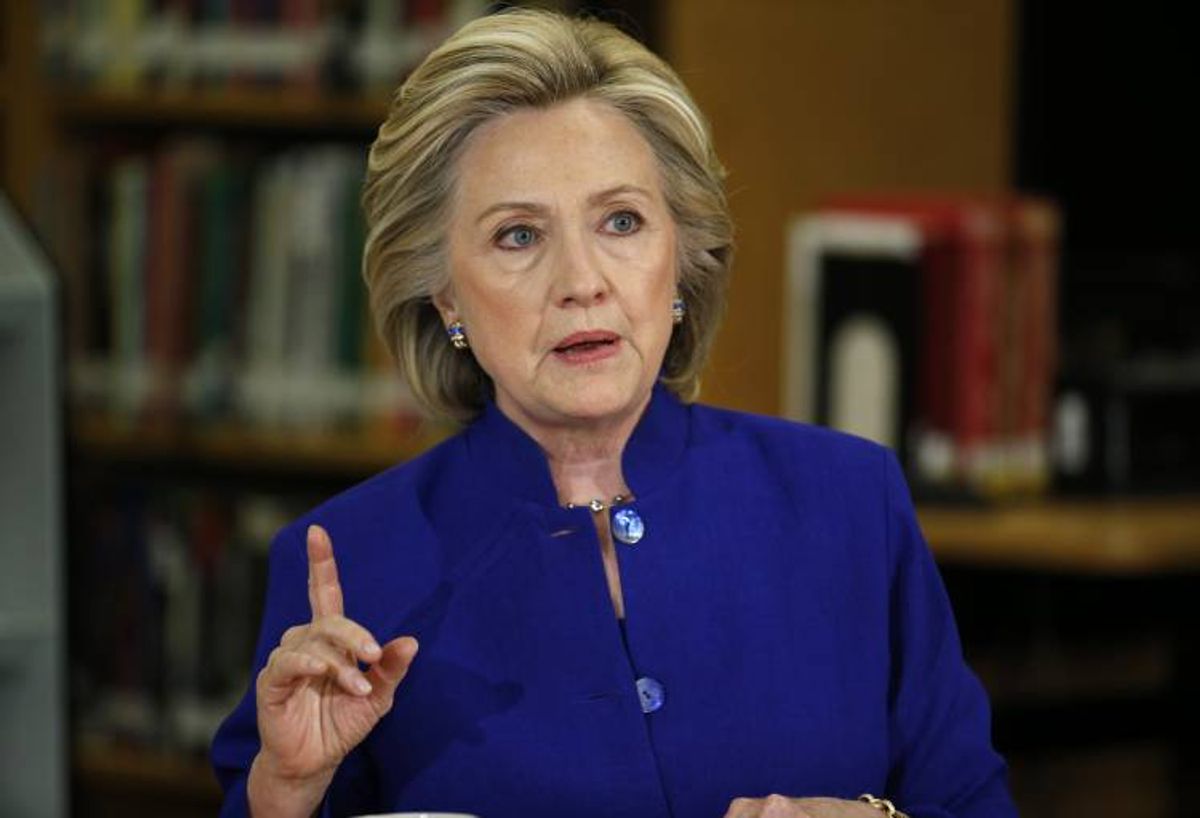 Where does Hillary Clinton stand on the Trans-Pacific Partnership?

It is indeed a "stand." She is standing out of the way of taking a firm position on the Trans-Pacific Partnership. Or in other words: she is "dodging" the question.

She said Sunday in Iowa she believes that the administration should listen to Democratic members of Congress to try to strike a better deal.

At a rally in Iowa, Clinton said that if the president can't come to terms with Pelosi, there should be no deal. "Here's what I think should happen now," Clinton said. "The president should listen to and work with his allies in Congress, starting with Nancy Pelosi, who have expressed their concerns about the impact that a weak agreement would have on our workers, to make sure we get the best, strongest deal possible and if we don't get it, there should be no deal."

Clinton said she wants to "find out what's in it and make it as good as it can be," and pushed for more transparency "so the American people can actually see what will be in a finalized deal."

I'm not sure that this is what Democratic members of Congress are telling the president right now, that he needs to improve it and win stronger protections and blah blah blah.They're telling him that they don't believe the Trans-Pacific Partnership is salvageable, and they're using the legislative procedures available to them to block it. Perhaps there was once a point where a significant number of congressional Democrats were willing to hear out the president on TPP. That window passed when Obama took up the strategy of blowing off Democratic critics and linking arms with the likes of Rep. Paul Ryan to push through Trade Promotion Authority -- a.k.a. "fast track," which would allow Congress to vote up or down on the final agreement but not to amend or filibuster it.

Blocking TPP was what Friday's fireworks on the House floor was all about. The administration has argued that TPP will be much more difficult, if not impossible, to complete if Congress does not grant the executive branch Trade Promotion Authority, which would narrow the congressional review process if and when TPP negotiations are complete. And so congressional Democrats who are against TPP, which is most of them, sought not to grant the administration Trade Promotion Authority. The administration and congressional Republicans made passage of TPA, which draws most of its support from Republicans, contingent on renewal of Trade Adjustment Assistance (TAA), a program that throws a few bucks at workers displaced by trade agreements. So House Democrats rejected TAA for the larger goal of killing off TPA, for the larger goal of killing off TPP.

This is a bit confusing, but not that confusing. The Clinton campaign, though, is billing this as the absolute most confusing explanation of procedure that's ever existed, and is using that as an excuse to deem it unimportant and withdraw comment.

Various Clinton officials appeared on the Sunday talk shows yesterday to give some variation of the same explanation for why Clinton wouldn't weigh in on extraordinary fight in Congress over TPA: it's a bunch of insider process-y gobbledygook. "There's a lot of congressional jockeying going on right now over things like TAA and TPP, acronyms that no voter understands," strategist Joel Benenson said when asked whether the president should have fast-track authority. He referred to the fast-track fight as "Washington inside baseball." Campaign manager Robby Mook described the TPA fight as a silly one about "procedures and parliamentary this and that." And chairman John Podesta said that Clinton would only "render a judgment" on whether TPP is Good or Bad when the agreement is final.

The Clinton campaign is right that few voters probably understand what's going on in Congress right now. That does not make it unimportant, and relying on that lack of knowledge to avoid answering a question is a dodge. Here's one person who absolutely understands what fast-track authority is and why it matters: former Secretary of State Hillary Clinton. She understands better than most humans on the planet that without TPA, it's less likely that a final TPP agreement will be reached. Should the president have fast-track authority to help negotiate trade deals? is not some silly question that only sillyheads in Washington should think is important. It is the most important political question of the moment, since it is the precise matter of legislation dominating Congress right now, and its outcome will have a dramatic effect on the U.S. and global economy. TPA is a BFD, to use one more terrifyingly obscure acronym.