As long as the Obama administration fails to act, real women are suffering trauma and sometimes irreversible harm 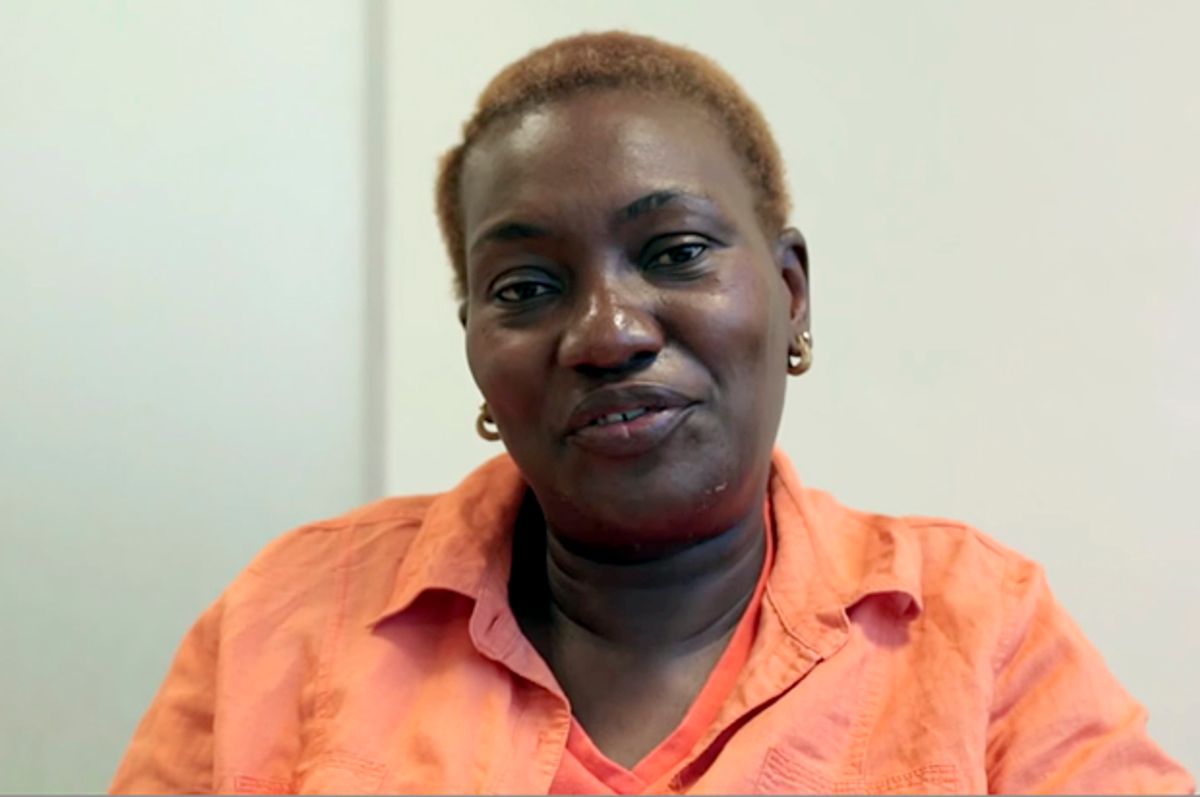 During an outbreak of violent unrest that followed Kenya’s 2007 election, Jaqueline Mutere, a widowed community organizer and mother of four, was raped.

For women caught in conflict zones or societal breakdown, sexual violence can lurk around every corner and behind every gun. A United Nations report lists a dozen countries in which sexual violence or forced marriage currently is being used as a weapon of aggression. Aggressors may inflict sexual assault on either males or females, but in addition girls and women are frequently subjected to sex trafficking and forced marriage.

In patriarchal cultures, women are possessions of men; and one way men display dominance over each other during war or social anarchy is by taking or raping women that belong to their enemy. Rape may be used systematically as a weapon for humiliation of enemies, or perpetrators may rape women and girls as part of a disinhibited destructive rampage, or females may be treated—as they were in the Iron Age narratives of the Old Testament—as booty of war. Regardless of the assailant’s intent, the trauma can be devastating for victims, particularly when forced sex is followed by pregnancy and a rape victim finds herself incubating her rapist’s offspring. Pictures of girls released from Boko Haram captivity this spring show many of them bulging with pregnancies forced on them by their captors.

American foreign policy, shaped by the religious right’s fanatical focus on controlling female fertility, has perpetuated these harms. In the words of Rabbi Denise Eger, president, Central Conference of American Rabbis, “When rape is used as a weapon of war, women around the world suffer. They are physically, emotionally and spiritually traumatized. Then, without proper reproductive health care, including at times abortion, our foreign policy is complicit in further inflicting damage on her body, mind and soul."

Such was the case for Jaqueline. As life returned to some semblance of normal for most residents of Kenya, Jaqueline found herself facing the secondary trauma of pregnancy. With her youngest child just a year old and her body depleted, exhaustion made work impossible. She decided to abort, but tried three times and failed to get a safe abortion. Ultimately she gave birth followed by a postpartum haze of ill-health and depression, all the while trying to feed her children and hold her family together as a single widowed mom.

Not in Spite of Faith, Because of Faith

On June 4, Jaqueline spoke to a summit of faith leaders in Washington, D.C., who are lobbying Barack Obama on behalf of rape victims in conflict zones—girls and women that they believe should have access to the full range of post-rape recovery services including safe abortion care. The summit included leaders from Christian, Jewish, Muslim and Unitarian traditions who say that they support abortion access not in spite of their religious beliefs and values but because of those beliefs and values.

In the words of the Rev. Harry Knox, executive director of the Religious Coalition for Reproductive Choice,

Our faith calls us to love our neighbor. It calls us to compassion. When we look at all of the reasons that a woman may have an abortion, ranging from concern for the children she has at home, to her own health, to her hopes and dreams for the future. . . . Compassion demands that we empower her to make the best decision for herself and her family, and that we press policy makers and the medical community to make available whatever care she might need.

Each participant in the summit expresses this passion through the lens of his or her own religious tradition. Ani Zonneveld of Muslims for Progressive Values talks about the plight of women who are being subjected to sexual coercion and violence in the conflicts of the Middle East, including as victims of ISIS:

No one bears the right to be arbiter over another’s body or mind, and no woman or girl should be subject to such wanton and inhumane arbitration. To deny reparations for these women and girls while this violence permeates and destroys their lives and futures should, however, be subject to judgement. It is deplorable and morally reprehensible that in light of our government’s capacity to offer some respite and alleviation to the women and girls in Iraq and Syria they refuse to do so. It is time we hold our government accountable.

In the decades before and after Roe v. Wade, faith leaders like Rev. Knox led the fight for safe, legal abortion in the U.S. A broad array of mainline Protestant denominations issued statements in support of abortion access, in which they cited values including justice, compassion, love and humility; and they recognized the role of family planning in helping women, children and men to flourish.

To leaders like Knox, Zonneveld, Eger and their inter-faith colleagues, the religious right’s determination to deny women reproductive empowerment tools ranging from information and contraceptives to abortion care is not only a violation of faith but out of line with the history of their traditions.

The Religious Coalition for Reproductive Choice emerged from a network called the Clergy Consultation Service, an underground railroad that provided women seeking abortion care with safe passage across state lines before Roe v. Wade. Clergy in the network risked their reputations and livelihood and the potential of jail time because they felt called by God to care for their parishioners and other women in their communities.

The Roe v. Wade Supreme Court case itself was born at a Unitarian congregation in Dallas, where a study group of congregation members became convinced that they needed to address the legal barriers that were forcing women to carry ill-conceived pregnancies, in particular poor women who couldn’t travel across state lines or overseas to obtain safe abortion care. As a result of that study group, members of the Unitarian congregation decided to raise money and hire Sarah Waddington to pursue the litigation that ultimately changed the law of the land.

This time around, the faith leaders at the Washington summit aren’t seeking a legal change. They simply want the Obama administration to revisit how existing law is being interpreted and implemented. The Helms Amendment, first passed in 1973 and renewed under several administrations, forbids U.S. foreign aid from paying for “the performance of abortion as a method of family planning.” It does not prohibit foreign aid dollars from funding abortion for the purposes of protecting a woman’s health or as a part of trauma treatment. But to play it safe, regulatory agencies and service providers anxious to prevent any interruption in aid dollars have interpreted Helms conservatively, as a complete ban on funding for abortion care.

For decades now, vulnerable women like Jaqueline have paid a high price for the restrictive interpretation of the law. Some seek unsafe abortions outside of regulated care facilities. Others carry babies that they despise and abuse. Some sink into depression. The Security Council of the United Nations has recommended that women in conflict zones receive comprehensive rape recovery care, including abortion where desired in order to promote physical and psychological healing. But U.S. policy and restrictions on funding create barriers that ripple beyond U.S. foreign aid, shaping medical services and care more broadly.

A wide range of reproductive empowerment advocates, including more than 30 religious organizations, have lobbied the Obama administration to clarify and then repeal the Helms Amendment so that rape victims in conflict zones have access to the full range of care. According to legal analysis by the National Women’s Law Center, President Obama has the power to simply order a change in how the law is administered. But to date he has failed to act, and in the meantime real women and families are suffering trauma and sometimes irreversible harms.

Now the advocates are stepping up the visibility of the fight, and an inter-faith coalition of religious leaders intends to lead the charge. In the words of Knox:

It sometimes falls to faith leaders to call the moral question for policy makers, and we are feeling that moment. We’ve been told that things were happening and things simply haven’t happened. The atrocities continue to happen in conflict zones and women’s lives and families lives are at stake. This is a moral issue, and we are motivated by our sense that it is our duty to call that question. We’re going to talk about how we can sustain that call and make sure that our constituencies are activated to make that call heard.

As Jaqueline Mutere struggled to reclaim her health and her life after the trauma of rape and unwanted pregnancy, she found herself meeting women with similar experiences. In 2010, she founded a community-based organization, Grace Agenda, that helps women heal from sexual assault and that fights for better safeguards and services. Today Grace Agenda has an office in Busia on the Ugandan border as well as in Nairobi; but it started as a small group with just five members, women who caught Mutere’s attention and heart when she was in her own healing process. “I encouraged them to open up and learn not to transfer their trauma to the child,” says Mutere. “Gradually they did.”

Mutere serves, organizes and advocates so that gender-based violence will become more rare, and reproductive empowerment more common. Her goal is that any Kenyan woman who falls prey to sexual violence will be able to obtain the full range of services she needs. That will allow her to reclaim her physical, emotional and mental health so that she can fully engage again in work, caring for her family, and living the life of her choosing. According to a report issued by U.N. Secretary-General Ban Ki-Moon, that includes access to "the safe termination of pregnancies for survivors of conflict-related rape." The religious leaders who met last week in D.C. are looking to Barack Obama to make that hope a reality.