Graham is boycotting the bank Wells Fargo... because they created an ad with a lesbian couple 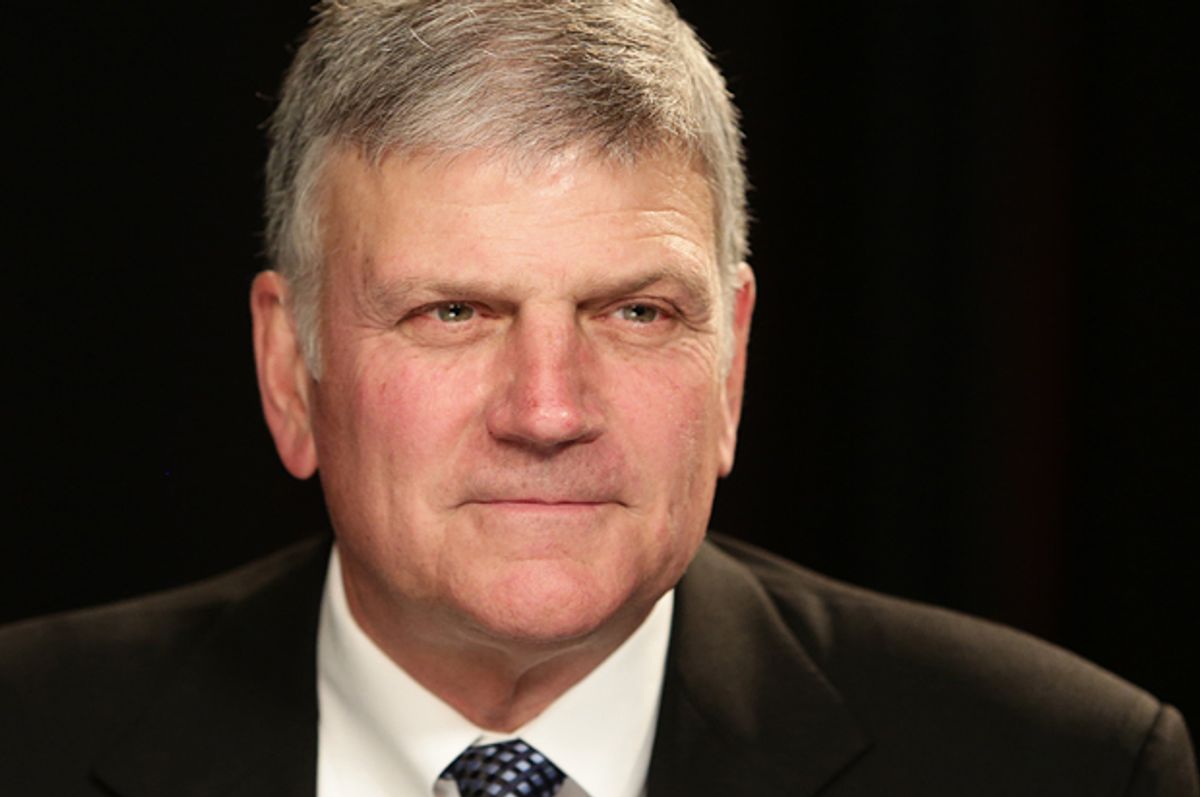 Franklin Graham, the religious crackpot and second-generation swindler, is in the news again. This time he’s taking a triumphant stand against the banking giant Wells Fargo. Why Wells Fargo, you ask? According to Graham, one of their recent ads “went beyond being gay-friendly to being a public advocate.” The ad itself is hardly provocative. It features a lesbian couple learning sign language as they prepare to adopt a deaf child. Apparently, that was too much sin for Graham to bear.

Of the many injustices done by Wells Fargo, it’s illustrative that Graham disowned the banking institution for one of the few things they’ve gotten right; it really highlights just how distorted his moral compass is. The world is awash in actual evil, and he’s indignant about an ad celebrating a couple’s commitment to adopting an orphaned child. What an egregious waste of human energy, and what a thoroughly stupid thing to be exercised about.

On his Facebook page, Graham wrote: “Have you ever asked yourself – how can we fight the tide of moral decay that is being crammed down our throats by big business, the media, and the gay and lesbian community?” That sentence was almost interesting until he casually associated gay people with the moral decline of America – something unthinking evangelicals love to do. This is Graham’s shtick, though. He’s not interested in real problems and real suffering; he’s interested in being seen, in finding a stage for his self-aggrandizement.

Like his father, Billy Graham, Franklin is a very rich and fatuous firebrand. Also like his father, his preachments are bigoted and totally devoid of moral logic. You may recall that last year he earnestly praised Vladimir Putin for his archaic anti-gay laws, which contributed to the death and torture and maltreatment of countless Russian citizens. Anyone who fancies Vladimir Putin a moral visionary has disqualified himself from adult conversations about ethics. And yet Graham continues to speak authoritatively about right and wrong, good and evil. And, regrettably, people continue to listen.

In a recent interview about his decision to move his ministry banks accounts (which reportedly total over $100 million) from Wells Fargo, Graham remarked: “I hear so many arguments that we need to love the gays and lesbians. Of course we love them. And we should love them enough to warn them that if they don’t repent and turn from their sin and receive Christ, they will spend eternity in hell.”

Here we have the moral confusion at the heart of the evangelical movement perfectly expressed. Graham, like so many of his ilk, insists that he’s not full of hate, that he actually loves gay people. That’s bullshit. It’s obscene to say you love someone right before condemning him or her to an eternity of hell. This is the move too many Christians try to make in moral discourse today: They say it’s God’s business to judge, but they condemn; they say they hate sin but love the sinner, but they embrace laws that demean and punish those who don’t share their values; Graham’s virulent anti-gay rhetoric is a particularly disgusting example of this.

It’s no accident that Graham uses words like “lifestyle” and “choice” when denouncing homosexuals. He wants you to think he’s attacking gay people for what they do rather than for who they are, but that’s a ruse, because that’s exactly what he’s doing. Dismissing homosexuality as a choice makes it easier to judge and discriminate against, and it ignores the simple truth that gay people no more chose to be gay than I choose to be right-handed. But Graham doesn’t want to deal with this truth, because it runs counter to his religious ideology.

In the interview cited above, Graham also remarks: “If a person says, ‘but I’m gay,’ okay fine, but you don’t practice it, you have to stay away.” This is a manifestly wicked thing to say and to think. Indeed, one searches in vain for a more intellectually defective and psychologically destructive message. Sure you’re gay, Graham says, but don’t actually be gay – that would be ungodly. Instead, hide yourself, pretend to be something you’re not, and live a lie for the rest of your life. Herein lies one of the worst, most unethical teachings I know: to tell someone that they’re born broken, sick, and unworthy; such nonsense is pitilessly peddled by people like Graham, and much suffering results because of it.

Religious entrepreneurs like Graham are perfunctorily treated like moral authorities in this country, and that’s a shame. Graham has a very high opinion of himself, but he deserves our ridicule; he’s a faith-based huckster and an organ of hate. Full of false humility, he claims always to be doing the Lord’s work. But that’s not what he’s up to. He’s an unremarkable hack, a man coasting on the success of his father. And thanks to the very un-Christlike fortune he’s amassed, he gets to enjoy all the trappings of modernity while shrouding himself in medieval bigotry. Enough already.

Fallible mammals like Graham have no business telling the rest of us what God wants. I’ve read the Bible, too, and I can cherry-pick passages to suit my agenda just as he does. When Graham claims to speak for God, he’s really speaking for himself; he should be honest about that, and abandon any pretense of divinity for his hate-mongering.