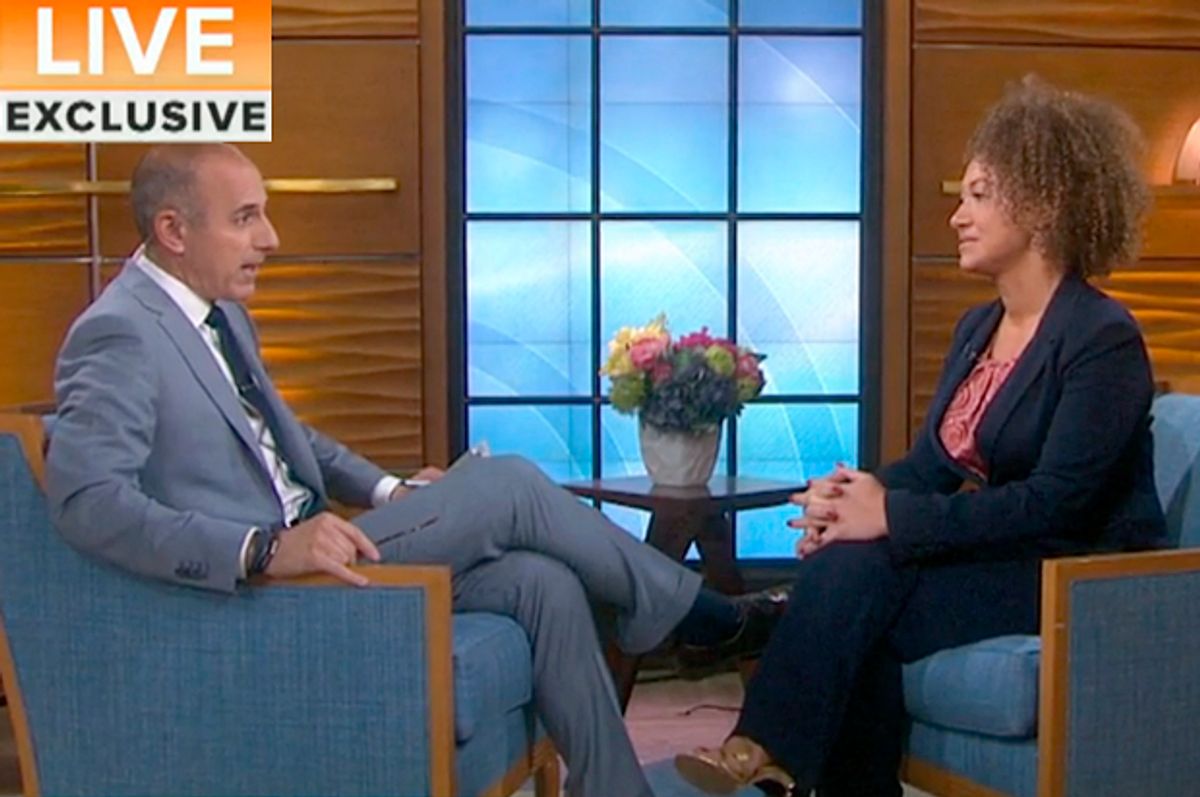 People all over the world are scratching their heads over Rachel Dolezal, the Spokane, Wash., woman raised white in a Caucasian family who has for years presented herself as African-American. Is she profoundly enlightened? Crazy? Kidding? A true believer or supreme opportunist? Showing us the complexity of racial categories in an age in which many categories have broken down? All – or none -- of the above?

If you’re a bit confused by the whole Rachel Dolezal thing, you are likely to come out of her first big interview even more baffled. That’s partly because these issues are indeed pretty complicated in the 21st century. But it’s also because Matt Lauer, the Today Show host who was handed an important interview on what’s clearly the hottest topic of the week, was simply outmatched by Dolezal. He got part of the job of interviewing right – getting his source to open up – but for much of what matters – like getting her to explain herself clearly and in context – he failed miserably. Viewers will come out of the interview with more questions than they had coming in.

The thing is, it started pretty well. After smartly establishing his sympathy with Dolezal – “You’ve had a busy week… You’ve started a conversation about race” – he came up with an unexpected opening question that has the added advantage of not alienating his subject. “Did this come as a surprise to you, or did you always expect the lid would be blown off your story at some point?”

Dolezal responded that she knew at some point she “would have to address the complexity of my identity” but that “I identify as black.” It’s rarely a good sign when the most quoted lines in a serious interview come near the very beginning, as when she talks about her childhood: "I was drawing self-portraits with the brown crayon instead of the peach crayon, and black curly hair."

And when Lauer made his toughest assertion – “When did you start… deceiving people, and telling them you were black?” she came back with, "I do take exception to that because it's a little more complex than me identifying as black or answering a question of, are you black or white?"

So he wins points for getting her perspective on the controversy. But an interviewer on a subject of this importance can’t be all good cop – he needs to pivot to the tough questions at some point and keep the subject from dodging. And it’s here where Lauer was simply in over his head. After the question about deception, Lauer never summoned that kind of courage again.

When she concedes that she sued Howard University for discriminating her as a white woman -- in which she legally defined herself as Caucasian -- he lets it slide. Ditto with her supposed black "dad." (Are re redefining the word "dad" to mean any cool older guy?)

Throughout the conversation, Dolezal was poised, persuasive, and weirdly lucid, even bitterly funny (“this is not some freak, ‘Birth of a Nation,’ mockery blackface performance”), until descending into a series of trendy buzzwords like “empowerment” and talk about her life as a “journey” of “survival.” And after the first few exchanges, we learn just about nothing except how rhetorically gifted and well practiced an interview subject Dolezal is.

The subtext to all this – and what makes it interesting -- is nearly a century of crossover between black and white. That since at least the birth of the blues and the Harlem Renaissance in the 1920s, white Americans have been fascinated with black culture, and that took a huge jump forward in the ‘50s as a form of popular music that was roughly half black captured a mass audience. Over the next decade, it was refracted by English people like Mick Jagger and sold back to us. By the ’80, you were more likely to hear Public Enemy or James Brown at party at many campuses in the U.S. and U.K., and Toni Morrison’s novels became perhaps the most frequently assigned contemporary fiction at elite schools.

But is a cultural connection to blackness – which many Americans under 60 possess at least some of – the same as being a black American? As having at least some mix of the following: Ancestors who were brought here in chains, who were enslaved after their families were shattered, and then even after emancipation denied the right to vote and in many cases the ability to live in decent neighborhoods, go to good schools, to swim or eat or drink in the same places as white people?

And aren’t the protections given to black Americans – anti-discrimination laws, for instance – designed to address the legacy-of-racism stuff and not the I’ve-seen-a-bunch-of-Spike-Lee movies part?

Dolezal, who worked for the NAACP, who has black siblings and sons, knows all this history well. But Lauer proved he was simply not up to the challenge here. She simply wiped the floor with him – and the real loser is the rest of us at home watching, waiting for some real truth to come out.