Rachel Dolezal to Matt Lauer: "This is not some freak, 'Birth of a Nation,' mockery blackface performance"

Her racial identity is "on a very real, connected level" 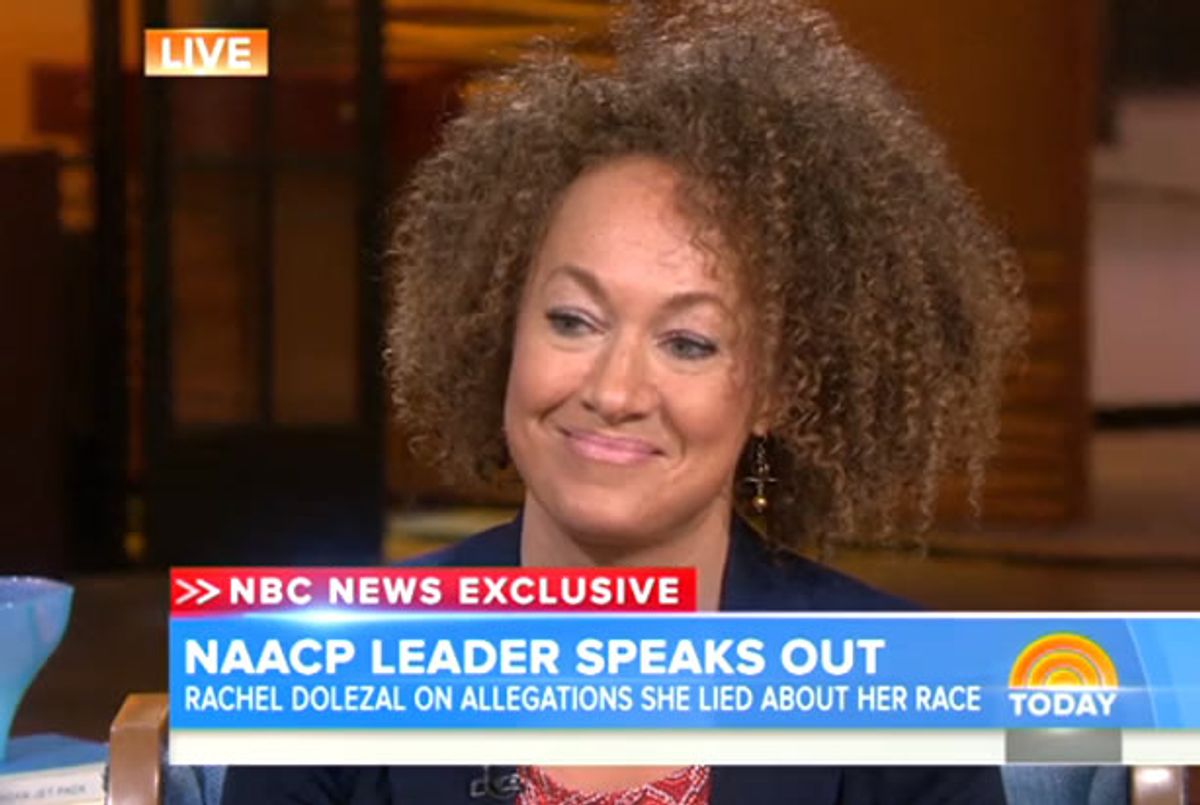 Tuesday morning on "Today," co-host Matt Lauer interviewed Rachel Dolezal, the woman at the center of the current discussion about race -- and the social construction of it -- in America today.

"Did you always know that the lid would be blown off this?" Lauer began by asking.

"At some point," she replied, "I did know I would have to address the complexity of my identity."

Asked about her father's statement that he didn't understand why she had to pass as African-American in order to work for the NAACP, Dolezal said she doesn't understand why her parents need to "whitewash" the work that she's done and how she's identified.

She further claimed that she began identifying as black from an early age. "I was drawing self-portraits with the brown crayon instead of the peach crayon," she said.

Lauer asked when she started openly "deceiving" people about her race, and she took exception to the question. "It was a little more complex than me identifying as black," she said, before saying that newspapers began referring to her as "trans-racial" and "bi-racial" early in her career, and she never corrected them.

"Why didn't you correct them if you knew it wasn't true?" Lauer asked.

"It's more complex than it being true or false in that particular instance," she replied.

Dolezal claimed that she doesn't darken her skin, she merely doesn't "stay out of the sun." Lauer asked if what she did is akin to "blackface," and read a quotation from the Washington Post's Jonathan Capehart, who wrote that "blackface remains highly racist, no matter how down with the cause a white person is."

"This is not some freak, 'Birth of a Nation,' mockery blackface performance," she said. "This is on a very real, connected level." She added that she's had to "live the experience," especially after she gained custody of her adopted brother. "I couldn't be perceived as white and be Isaiah's mother," she said.

Dolezal concluded by saying that she hopes her recent experience "can drive at the core of definitions of race, ethnicity, culture, self-determination, personal agency, and ultimately, empowerment."

She said one of her sons -- both of whom were on hand in studio -- told her that "racially you're human, culturally you're black."

Watch the entire interview with Matt Lauer below Today.