The Pope is now arguing for the moral imperative of fighting climate change. Congress, meanwhile, does nothing. 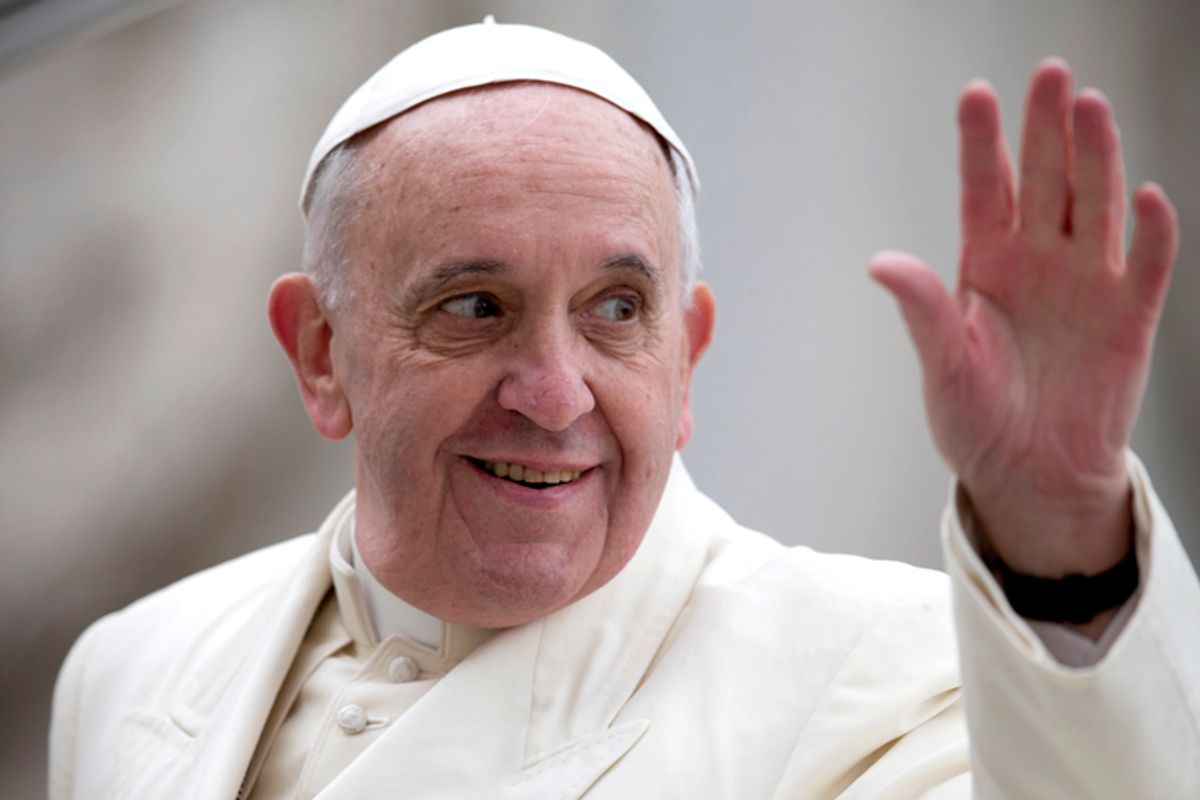 It is interesting, in light of Pope Francis' much-anticipated encyclical on the environment, "Laudato Sii," to look at a tabulation of U.S. Senator's positions on climate change issues that was recently released by the Environmental Defense Fund (EDF). The most surprising thing about the tabulation is how unsurprising it is. All 42 Senators listed as "Climate Realists" are Democrats, or independents who caucus with the Democrats. All 35 "Climate Deniers" are Republicans. In addition, EDF lists a group of 23 Senators who it regards as persuadable, although currently not in the "realist" camp. They are all Republicans too, with three exceptions.

In other words, the Senators are almost completely polarized by political party. This unsurprising result is bad news for anyone who thinks that the Senate is a deliberative body. Assuming that the Senators have a good sense of their constituencies, it is also bad news for anyone who thinks that the public is capable of rational deliberation on important issues. The irony is that the leading justification for democracy among political theorists these days is that the public will engage in such rational deliberation. It's a nice-sounding theory, but do these theorists read the news? Here we are, having had a democratic regime for 240 years, and the public doesn't seem to have moved one step toward rational discourse.

The polarization of the Senate would be depressing enough if it involved an issue on which rational people could differ, such as free trade, the economic bailout, or welfare. But climate change is different. When the overwhelming majority of scientists, in the overwhelming majority of countries, conclude that climate change is real, the deniers' position is simply irrational. Science, after all, is what makes motor vehicles, televisions and cell phones work. The conclusion that climate change is occurring is based on the same scientific principles, and has been reached by using the same scientific method. Of course, it's possible that the scientists have all made a mistake. But public policy is always based on probabilities, and the probability of such a colossal error is extremely low. To base public policy on the premise that this error has occurred, and ignore the enormous likelihood that the scientists are right, just doesn't make sense.

So the EDF chart not only shows that the Senate is completely polarized, but that it can remain polarized when one of the two opposing positions is demonstrably irrational. What makes even this level of un-deliberative polarization unsurprising is that many political scientists, as opposed to political theorists, have long argued that legislators are motivated exclusively by their self-interest in getting re-elected. This is called the public choice school of electoral research. If voters in a particular state want to deny that climate change is occurring, for various reasons, public choice predicts that candidate running for election or re-election will take that position as well, even if they know it doesn't make sense.

But another look at the EDF publication, which includes a map as well as a list of Senators, shows that the public choice explanation is overly simplistic. Senators are elected on a statewide basis. The map shows that, unsurprisingly, nearly all the Southern and Great Plains states (colored red, of course) have elected two adamant climate change deniers to the Senate. Nearly all the Northeastern and West Coast states (colored green, in this case), again unsurprisingly, have elected two Senators who recognize the reality of climate change. But in addition to four states that have elected two Senators EDF views as persuadable (colored black, for some reason), there are no less than 17 states that are striped because they have elected two Senators who take different positions on the issue. So it appears possible to take different positions with the same constituencies and get elected to the Senate. Either the voters are persuadable, or the representatives are willing to use their own judgment and convince the voters to elect them anyway.

Enter Pope Francis. The Pope can be a moral leader. Some Popes, like Francis' predecessor, Pope Benedict XVI, didn't achieve moral leadership even among Catholics, but others speak powerfully to Catholics and to other people as well. Pope Francis has already achieved this role, and that is exactly what is needed in the climate change debate. We know that there are at least 35 Senators, and probably a significant proportion of the voters, who simply cannot be persuaded by scientific evidence and rational argument, and another 23 who haven't been persuaded so far. But they, or their constituents, may well be persuaded by the sorts of moral arguments that the Pope can deploy. In the final analysis, climate change really is a moral issue, after all. It seems likely that many of the people who claim to disbelieve the scientific evidence just don't care about future generations, and then justify this irresponsible position by claiming that the science isn't reliable. They need to be persuaded that their position is immoral, and perhaps the Pope will succeed in doing so where science-based arguments have failed.