Nearly all of Dylan's disciples went on to eclipse him in one way or another. 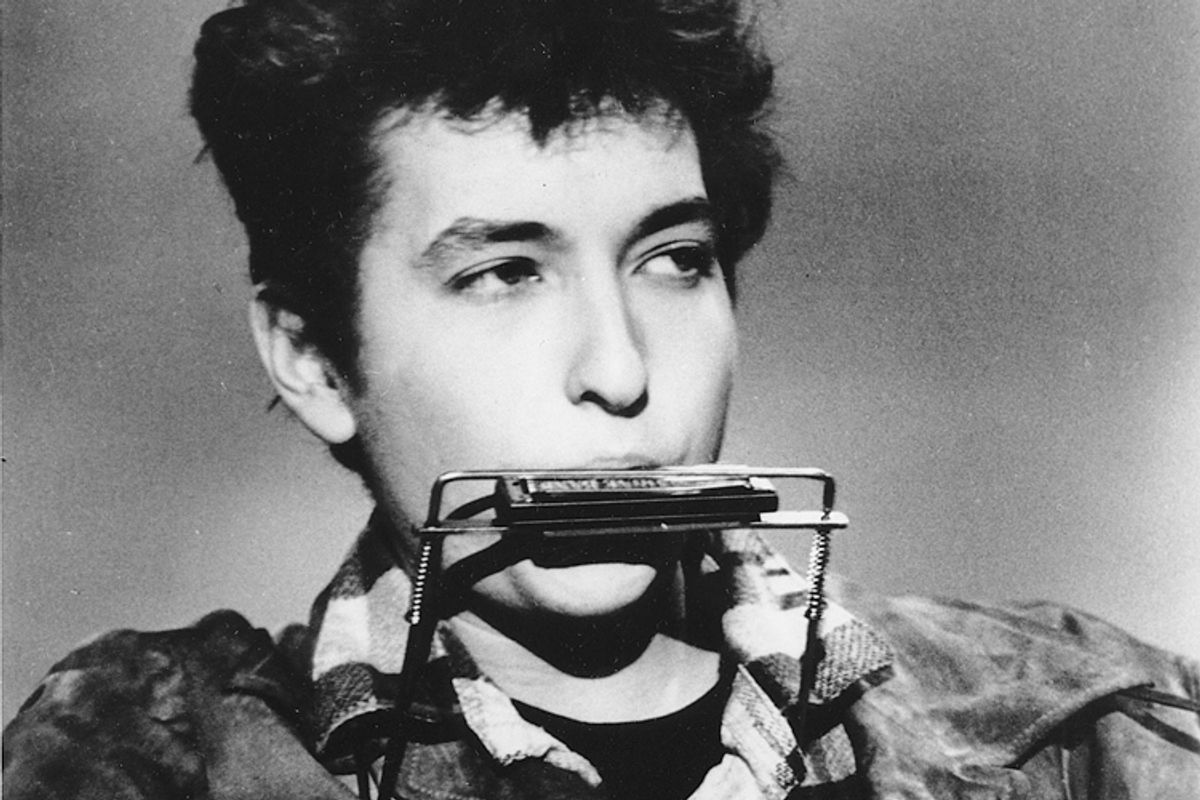 Bob Dylan may be the most overrated performer in the history of popular music. This is especially impressive since he’s often great; a talented songwriter with a quick wit and (at least early in his career) an ability to assimilate diverse styles without compromising his own vision. These strengths, though, were accompanied by real weaknesses. As a singer, he mimicked the roughness of roots sources without capturing their nuance or power, often resulting in self-parody. As a lyricist, he had a tendency to mistake Beat poet doggerel bathos for profundity. It often seems like he's been celebrated as much for the flaws as for the virtues — his incompetence seen as punk rock authenticity and his pomposity as literary bona fides.

Inevitably, given his status as ultimate awesome courageous rock God, Dylan has influenced just about everybody. And, inevitably too, given the gap between his standing and his sometimes quite good but rarely godlike music, many of those he's influenced have outshown him. Below is a list of just a few performers influenced by Dylan who are better than he is.

This is probably the least controversial suggestion on the list; Hendrix is one of the few performers whose reputation approaches the stratospheric heights of Zimmerman's. His cover of “All Along the Watchtower“ is his most famous Dylan lift, and the song certainly benefits from Hendrix's more expressive singing, as well as from the hard rock sturm und drung that distracts somewhat from the half-baked fantasy lyrics. But I think something like “Wait Until Tomorrow” is maybe a better showcase. The humor and the forays into tongue-twisting wordplay (“the mixed-up mind of you”) touch on Dylan, even as the song employs a gut-bucket, loose-limbed virtuosity that is simultaneously more swaggering and rootsier than anything Dylan ever put together.

Donovan, “Get Thy Bearings”

Donovan was initially billed as the British Bob Dylan, and early tracks like “Catch the Wind” were certainly heavily influenced by Dylan's latter-day Guthrie shtick. Donovan's range was always greater than his American contemporary's, though, and his combination of ominously fey British folk with pop and rock was significantly odder and more original. “Get Thy Bearings” sounds like Steely Dan for faerie singalong; certainly a funnier, and slyer, folk betrayal than Dylan going electric.

Johnny Cash and June Carter Cash, “It Ain't Me, Babe”

Cash loved Dylan's music, and covered a number of his songs over the years. This duet with June is probably the most famous — and also a good indication of why Cash is superior to his source material. Dylan's version of “It Ain't Me, Babe” is fairly straightforward; a kiss-off song that teeters on the edge of puerile bad-boy self-mythologizing. Cash's version doesn't teeter, though; he hams it up, from the sneered “No, No, No” which is phrased as “Nyah, Nyah, Nyah” to the way he spits out “Babe!” all done with mountain chorus harmonies and horns in the background. Cash is willing to emphasize the song's ridiculousness. Dylan wasn't — either out of misplaced sedateness or, less charitably, because he didn't realize how ridiculous it was.

Dylan's influence on Lou Reed's New Yawk talk-singing is obvious, but you can hear “Highway 61 Revisited” and “Blonde on Blonde” in the artsy rootsy groove of something like “Run Run Run” as well. Reed's collaborators were a lot more well-equipped to combine high-art cool and primitive throb than Dylan was, though, and Reed's lyrics, at this stage of his career, anyway, channel Dylan's snark without his forays into bathos (need I mention the embarrassment that is “Just Like a Woman”?) In a lot of ways, “The Velvet Underground and Nico” could be seen as the perfect Dylan album, the one the man himself never quite managed.

Or alternately you could see “On the Beach” as the perfect Dylan album. Certainly the drone of “Ambulance Blues” manages to channel the bleak oddness of the Anthology of American Folk for the modern apocalypse in a way that Dylan would have envied — nor could Dylan have come up with music as perfect as that cello sawing through the drone-metal slow groove. Where “A Hard Rain's A-Gonna Fall” seems to strain after visionary oomph, Young's laconic, “You're all just pissin' in the wind” and “It's hard to know the meaning of this song” are written by a guy who learned from someone other than Dylan that saying less is sometimes the thing to do.

Van Zandt's idiosyncratic, Dylan-inspired delivery and phrasing were especially poorly served by the recording studio — most of his official albums are just about unlistenable. The live set, “Rear View Mirror,” is all the more wonderful for its rarity, though. Van Zandt's Dylan influence is obvious, but so is his debt to the more plain-spoken, and just generally better, poetry of Hank Williams. “Nashville Skyline” is one of my favorite Dylan albums, but its blend of country and folk sounds mannered and unconvincing compared to this.

Joni Mitchell, “A Case of You”

Joni Mitchell has sometimes lauded and sometimes scorned Dylan's music in her public statements, but his example certainly paved the way for her as a folk-tinged singer-songwriter. You can understand she might be a touch resentful, though, when she's so much less respected and so much better at both the singing and the songwriting than he is. Maybe she'd be more appreciated if her phrasing sucked and her lyrics were gibberish.

Beatles, “Happiness Is a Warm Gun”

The Beatles were famously influenced by Dylan during the “Rubber Soul” sessions, but you can also hear him hanging over the nonsense lyrics and highbrow snottiness of Lennon's “Happiness Is a Warm Gun” from the "White Album." The nod to Bob, though, also emphasizes the really-not-Bob bits — the psychedelic proto-metal heaviness, the actual willingness to do some songwriting, rather than just having one idea and wandering on with it till the track ran out. And of course, the fact that the person singing can actually sing.

Sly Stone, “Jane Is a Groupee”

Stone was a huge Dylan fan, though it doesn't necessarily come out in much of his music. Lyrically, “Jane Is a Groupee” could be a nod to Dylan songs like “Don't Think Twice, It's All Right” — though it's hard to trace a direct path from one to another, since misogyny is such a rock star universal. The soul vocals, snarling guitar and proto-funk rhythm certainly don't owe much to any era of Bob — though in the long run they'd arguably be more influential than Dylan himself.

Dylan's political commitments vacillated through his career, but his early activism remains iconic, and inspired this Minutemen classic. I'd probably take that crazed skittery D. Boon guitar solo over the bulk of Dylan's oeuvre — though, thankfully, there's no need to choose between Dylan and his heirs, since we're lucky enough to have both.