How did a black family end up pepper sprayed and beaten by cops at this Fairfield, Ohio public pool?

Even with video, it is almost impossible to see how things turned so awful so fast 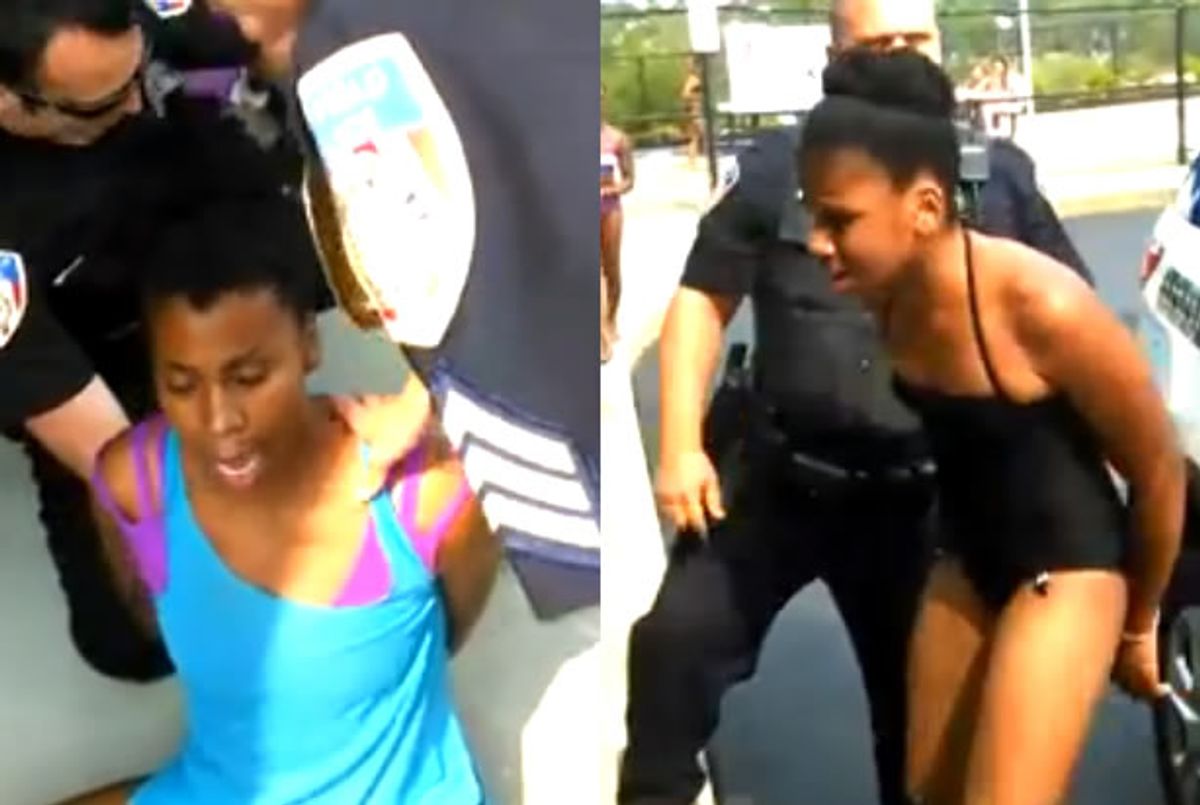 A confrontation caught on multiple cameras at a Fairfield, Ohio city pool is at the center of a controversy between police and citizens over how to interpret the video evidence, WLWT's Jackie Congedo and Brian Hamrick report.

The incident started after Krystal Dixon dropped off eight children at the public pool. One of them was asked to leave because pool officials said he didn't have proper swim attire. Dixon left to grab a new pair of trunks for the teen from her car, but when she returned was informed that the teen would not be allowed reentry.

According to Bishop Bobby Hilton -- who posted the videos on his Facebook page Tuesday -- Dixon reentered the pool complex in order to gather the other seven children in her care, but had to pass by the officer who had told the teen to leave. When she returned with the other seven children, the officer grabbed her arm and told her she had to leave.

The children begged the officer to let the mother go, at which point, this happened:

What exactly transpired in that video is, however, a matter of debate.

In a 911 call obtained by the Journal News, a pool employee said that "they're videotaping, trying to make it look like a racist thing, and it’s not at all. They were breaking our policies. We told them they couldn’t be here anymore, and it’s really scary and I don’t feel safe."

On Facebook, Bishop Hilton disputed the police's claim that Krystal Dixon refused to leave, saying that dashcam footage from the police cruiser which has not been released to the public captures her saying that she only came to pick up her children, so she left her car running. She allegedly asked officers if one of them could turn off her car.

"The police said the mother showed up and refused to make her kids leave," Bishop Hilton wrote. "Krystal leaving the car running speaks to her intent for this to be a brief stop."

Fairfield Police Chief Mike Dickey sees the videos differently. "I think the videos, including their videos, tell a different story. It's clear to me in the videos they were non-compliant. All they are trying to do is calm everyone down." He noted that unlike McKinney, Texas, the officers did not draw their guns despite the fact that they were being "attacked."

"I think when anybody is attacking a police officer, whether it's a gun attack or a physical attack or a knife attack, these officers are obligated to defend themselves."

On Facebook, Bishop Hilton claimed that a 12-year-old girl suffered a broken jaw and broken ribs in the incident, and that two other children were also hospitalized. Police agreed -- but only to an extent, claiming that the three children were taken to the hospital to be treated for the effects of pepper spray officers used in the incident.