I am black, and Rachel Dolezal is not

Her brother calls her racial passing an act of "self-hatred." To me, it's apocalyptic, white privilege on steroids 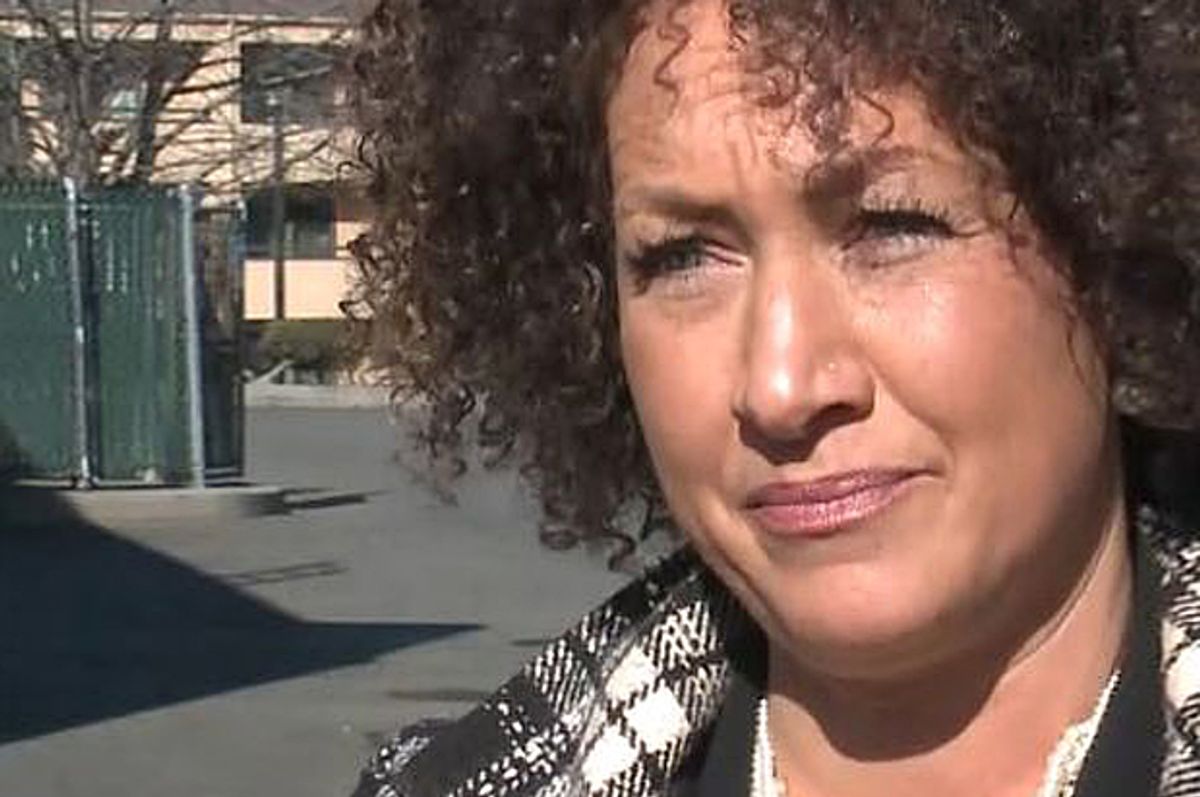 By now, most everyone on and off social media has heard about Rachel Dolezal, the White former NAACP leader in Spokane, Washington, who has been publicly misrepresenting herself as a Black woman for nearly a decade, and issued her resignation statement today in which she is decidedly evasive and resolutely non-apologetic. Since the story broke late last week, when her estranged White birth parents came forward with the claim that their daughter is “Caucasian by birth,” there have been the predictable influx of think pieces—among the exceptional are those from the Guardian, by my colleague Steven Thrasher, and by Adam Serwer for BuzzFeed—and news reports tackling each level of crazy as it unravels in real time. And the levels of crazy—of both the story and more specifically, the subject—are deep.

There is Dolezal’s invented and convoluted history of having been born “in a tepee in Montana” and the physical abuse she and her siblings endured at the hands of their parents, whom she claims beat them with “baboon whips” that were “pretty similar to what was used as whips during slavery.” There is her self-serving narrative of oppression and racism she experienced, as outlined in numerous detailed police reports filed by Dolezal in which she claims that White-supremacy groups “hung nooses in her home, vandalized and stole from her property, directed death threats toward her along with threatening to kidnap her son.” Other fabricated details include growing up in South Africa (she has never been, though her parents—Christian missionaries—and siblings lived there from 2002 to 2006), and hunting for food with bows and arrows.

More from DAME: "Debauchery is Fun -- to Visit"

And then there is the account from Rachel’s 22-year-old adopted Black brother, Ezra Dolezal, who told BuzzFeed that his sister has “brainwashed” their younger brother (who is also Black and adopted by their parents), and obtained custody of the boy whom she has been passing off as her “birth son.” Ezra explained to BuzzFeed that although their parents occasionally used corporal punishment, he and his siblings were treated well as children, and that it felt like a “slap in the face” for his sister to co-opt a Black experience when she grew up White and privileged. “She puts dark makeup on her face and says she Black,” he said. “It’s basically blackface.” This is the same brother Rachel warned not to “blow her cover” when he came to visit her in Spokane a few years ago from Montana, where their parents still live.

I’m a Black adoptee who grew up in a rural, predominantly White town, with a White family that comprised my adopted parents and two siblings who are their biological children. And what strikes me as the most perverse and pathological aspect of this story is Dolezal’s relationship to and ultimate identity-theft of her Black adoptive siblings, or at least her perception of what their identities mean to them and the world. Not least of all because I could not, at any given point in my life, despite having grown up in a White family, with no Black people within a 15-mile radius, suddenly choose to present myself as a White woman. Ironically, my White birth mother (my birth father is Black—receipts), whom I met when I was 11 years old, made the unsolicited and imperious decision to label me “culturally White, and cosmetically Black” as an adolescent, and then later, when I was an adult, openly scolded me for identifying as Black: “No child that comes out of my body is going to call herself a Black woman.” But for me, Black-identifying (as opposed to calling myself “biracial” or “mixed”) was not a choice so much as a fact. I am Black. Rachel Dolezal is not.

Also significant is where Dolezal chose to pull off her racial fraudulence (and from where she came)—Spokane and Montana, neither of which is exactly a hotbed of racial diversity (according to the U.S. Census, Spokane County is about 90 percent White; 2 percent Black; 2 percent Native American). Evidently, Dolezal also spent a period of time in Idaho as well. How did her lack of contact or immersion in Black culture inform her decision and/or desire to become Black? Dolezal’s mother Ruthanne has said that her daughter was “always interested in ethnicity and diversity” growing up. Well, so was my husband, who is White, and grew up in North New Jersey. He became a college professor who teaches the subjects of race and social policy. Our son identifies as Black—my husband cannot imagine that he would identify otherwise. When does a White person’s interest in race turn obsessive, proprietorial ... delusional?

More from DAME: "I Was the Only Virgin on Tinder"

How already difficult must it have been for Dolezal’s Black siblings to have been raised in a predominantly White environment, only to then have their adopted White sister steal the part of their struggle and history with currency, and that turns her into an anointed civil-rights leader—even if only active in relative obscurity, as she probably wanted (big black fish, small white pond).

Ezra regards what his sister did as “self-hating.” To me, it’s apocalyptic, White privilege on steroids: “Look at me! Look what I can do! I can just take this race and culture because I want it!” It’s a hyper-internalized colonization mentality, which in some cases, might not actually be all that distant from the concept of interracial adoption.

While most White parents who adopt Black children or children of color from other countries are embarking on an authentic desire to create a family, I have known of other White families whose desire to adopt a child of color is undermined by their White-savior complex, whereupon they not only save the life of a poor Black child, but also in their minds, they give the child a life. Obviously, this a tricky argument to make—as the Black community has always taken care of our own with grandparents, aunts and uncles, and family friends helping to raise kids who need a home, most Black kids who are up for adoption are likely facing some difficult hurdles (still, a life already being lived).

We do not know the details of how Dolezal’s parents came to adopt their Black children, but as the only White and biological child of her parents, perhaps Rachel felt outnumbered—and what do White people do when they feel outnumbered? They tend to dismiss, disregard, or kill the people blocking the way to their entitled experience and assume the land, culture and identity as their own experience and invention (see: America).

And what of the men in her life? Dolezal’s ex-husband is Black, and from pieced-together reports, it seems that she has a long history of dating Black men. Did they know she was White? Did she use them? Was her decision to pose as a Black woman motivated by a warped version of jungle fever? Was her need to be accepted as Black so great that she could not reconcile the value of being a White ally with a real and valuable story of fighting for civil rights?

More from DAME: "Can Rachel Dolezal Make a Comeback?"

There are still so many questions that remain, and given that her first statement since the story broke ignores entirely the central question amid this media maelstrom, it seems we’ll not get answers from her anytime soon. In one of the few interviews Dolezal gave before things blew up entirely, when asked how she would respond to people questioning her racial identity, she says: “I don’t give two sh*ts what they think.” Indeed, that much is clear.

With most of the criticism coming from the Black community (see Black Twitter), it is glaringly evident that Rachel Dolezal does not care what we think—those of us whose Black identity is unambiguous, whose racial existence is immutable.