Rush is a dude's band — that's the stereotype. But the band's "sincerity loop" has a wider appeal 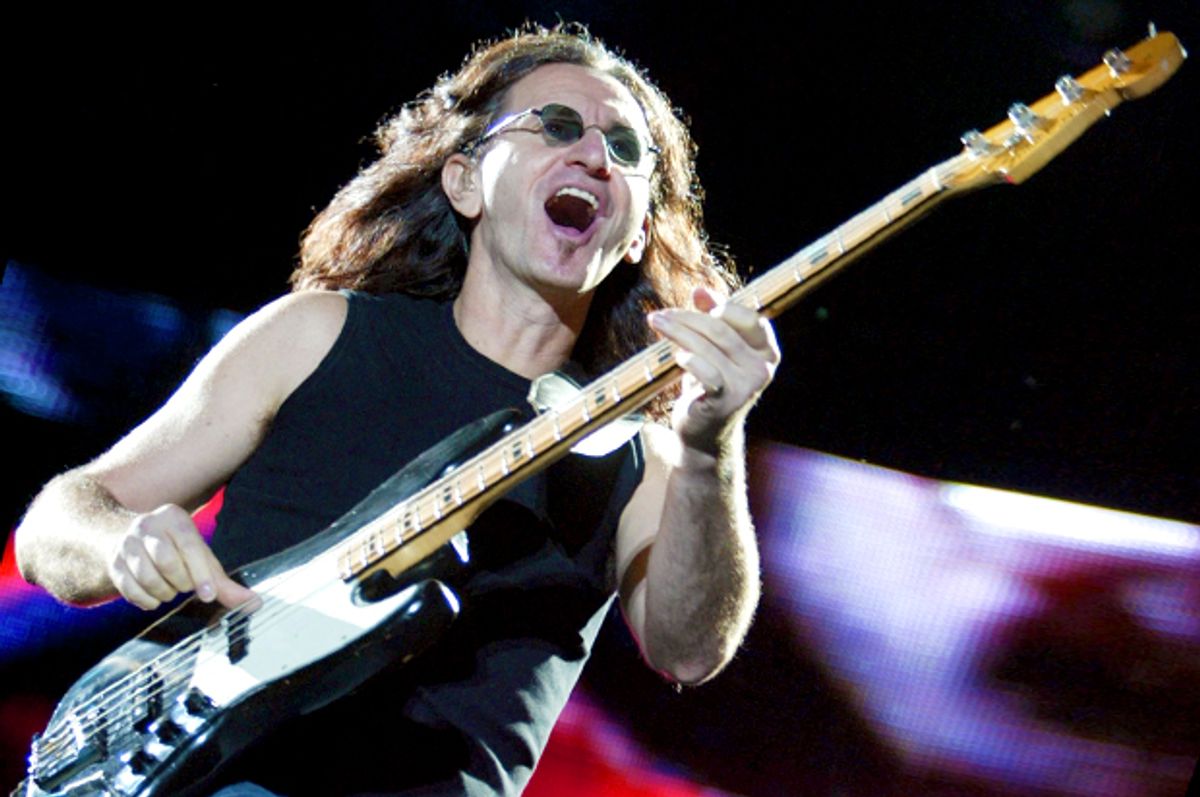 On Monday morning, Rush fans woke up to some rather unexpected news: "Rush Finally Make Rolling Stone's Cover." Yes, after 41 years together, the erudite, prog-rock trio had finally earned a spot on the cover of the magazine that (until recent times) had not exactly been a huge supporter of its career. Although some fans were cynical about the story's mere existence, Brian Hiatt's feature lived up to expectations for me, as it was nuanced enough to please fans but also placed Rush in a larger cultural context and explained why the band deserved such a high-profile piece.

The honor was even more timely, because the band is currently steamrolling across North America on the R40 Live 40th Anniversary Tour, playing selections from its entire career in backward chronological order. This run of dates is heavily rumored to be Rush's last major tour of this caliber, so my husband and I knew we needed to make the drive to Columbus, Ohio, from Cleveland to catch the show. Of course, Rush didn't disappoint: The notorious perfectionists blasted through a nearly note-perfect set, full of hilarious videos and elaborate multimedia elements -- a "marathon, intense show" I noted in a review I filed with Ultimate Classic Rock.

A funny thing happened when I started talking about the Rush concert on social media, however: Unprovoked, the tired clichés that have always plagued the band -- and prog music in general -- started cropping up. "I remember going to a [King] Crimson concert in the late '90s and it was about 90% males. Prog doesn't seem to attract many women," an acquaintance wrote on a Facebook photo I posted from the show. Someone else tweeted my review and tagged it with the flippant note:  "A woman went to a Rush show!" The latter quip in particular rankled me: In fact, this was actually the third time I've reviewed a Rush concert for a professional publication, and at the Columbus show, there were couples composed of men and women everywhere. (I wasn't the only woman in the photo pit on assignment, either.) It was far from a sausagefest or any kind of gender-imbalanced event.

Perhaps my irritation about all this also stemmed from the fact that I know so many women of all ages who are Rush fans. Today, the perception that the band's supporters are still just nerdy, prog-loving guys is a yawn-worthy, outdated stereotype. (Of course, the other Facebook friend who asked, "What's the ratio of balding-ponytail to air drumming?" at the show isn't doing that stereotype any favors either. Besides, I saw much more impressive air-keyboarding going on in Columbus.) Out of curiosity, I put a casual call out on Facebook and asked which of my women pals were also Rush fans. The response was almost overwhelming, so much so that I couldn't track down everyone suggested to me. While I knew of certain friends who were card-carrying, T-shirt-buying loyalists -- I know this because I saw their photos from the R40 tour or had discussed prog with them before -- I discovered plenty more who, unbeknownst to me, were also passionate supporters.

How and when these women arrived at Rush fandom differ. Several got into the band because men in their lives were fans: boyfriends, guys their mom dated, a "dreamy lifeguard." Some came to Rush on their own, in particular via the radio. These women first became aware of the band when they were teenagers; others became fervent appreciators in their 20s (and even later). The common thread to most of their responses, however, was the deeply personal relationship they had with Rush's music and lyrics: Long after the circumstances that piqued their interest about the trio had faded away, the band continued to resonate on a deep, thoughtful level. These women claimed (or reclaimed) the idea and experience of Rush and made it completely their own.

Everyone had a different story about what aspect of the Rush universe they most identified with, although the band's lyrical gifts frequently received a nod. "That's what Rush is really good at, telling stories," said one friend, Erin Jameson. "And not just crazy, sweeping dystopian stories; they can also tell stories about being the weird kid in class. But the music also suits the stories. I can sit down and read the words to 'Red Barchetta,' and it's a hell of a story, but it's incomplete without the music beneath it." My pal Emily Moore too singled out "Red Barchetta" and the band's "literary bent. Rush was a new world. There was mystery to a lot of it … To a 13-year-old girl, these guys were deep thinkers and storytellers." Another friend, Sarah Nank, pointed out how the band's complexity enables its music to be more malleable. "The layers of Rush lyrics and [their] compositions keep peeling away to reveal new insights into relating to my own life. I've felt that way about some bands at certain points in my life. However, Rush has been consistently present and changes with me."

The idea that the band's music delivers insights that evolve with time and life experience also rang true to Cat Pick, whose eighth-grade boyfriend introduced her to 1977's "A Farewell to Kings," the album containing "Closer to the Heart." Years later, after becoming acquainted with a "superfan," she finally saw Rush live, and realized their close ties to math-rock, a style of music she enjoyed. Rush's ability to inspire other bands (and its looming impact on other genres) stands out to Casey Purtle, who calls the band "a dangerous gateway drug into the world of prog music ... They are an indirect influence to [me] being awake at 2 a.m. checking out obscure Danish prog bands from the '70s. Plus, many of my favorite bands from other genres, like Enslaved and Agalloch, are heavily influenced by them. Half of the Norwegian metal bands around today might not be around if there was no Rush."

As for me, my Rush appreciation came later in life, in my 20s. Growing up in Cleveland, where the band had radio support from the very start of its career from WMMS, its songs were just part of the city's musical fabric. (In fact, the DJ/music director who deserves all the credit for championing Rush first? That would be a woman, Donna Halper.) But it wasn't until I had the chance to see them live in 2010 and then heard 2012's "Clockwork Angels" LP (which featured the string-swept, jangly  "The Wreckers" and the snarling "Headlong Flight") that Rush clicked for me. After that, I started going backward, gravitating toward the band's synth-burned '80s output and its atmosphere of isolation, smart (and still relevant) societal critiques and sense of disconnection from mainstream culture. Plus, I found both the band's dry sense of humor and nonchalant absurdity delightful, smart and wry without being exclusive. In hindsight, I can see how my love of bands such as My Chemical Romance presaged how I'd come to embrace Rush.

I'm heartened that my recent Rush experiences hint that the tide is turning toward a less rigid idea of Rush fandom.  At the Columbus show, there were two young teenage girls seated several rows in front of us (who looked like they were there with a dad or at least father-type figure) who were especially excited for what the '70s-focused second half was going to bring. And after my review ran, a proud dad made it a point to reach out to my Ultimate Classic Rock editor and ask that a video he took at the show be sent over to me, because he thought I'd appreciate it. The clip featured him and his 9-year-old daughter, excitedly singing along to "Red Barchetta" together. Clearly, the next generation(s) of Rush fans aren't beholden to that pesky stereotype of what a Rush fan is or should be.

More than that, discussing Rush with my female friends underscores that many of the reasons they like the band are no different than why so many men like Rush. Musical taste transcends gender: Saying a genre, movement or musical group appeals only to one narrow type belittles the subjective experience of finding joy and fulfillment through music. At the end of the day, a ferocious live concert appeals to the type of person who receives an emotional surge from having an ecstatic communal experience -- and finding emotional connection -- with a band. "[Rush] take it seriously where it counts, which is the music," Jameson says. "The rest of it -- the mini-movies, the interviews, the 'Trailer Park Boys' guest spots -- are just them having a good time. And we, the fans, have a good time with them. They love what they're doing. It matters to them and it makes what they do matter to us. It's a big sincerity loop."