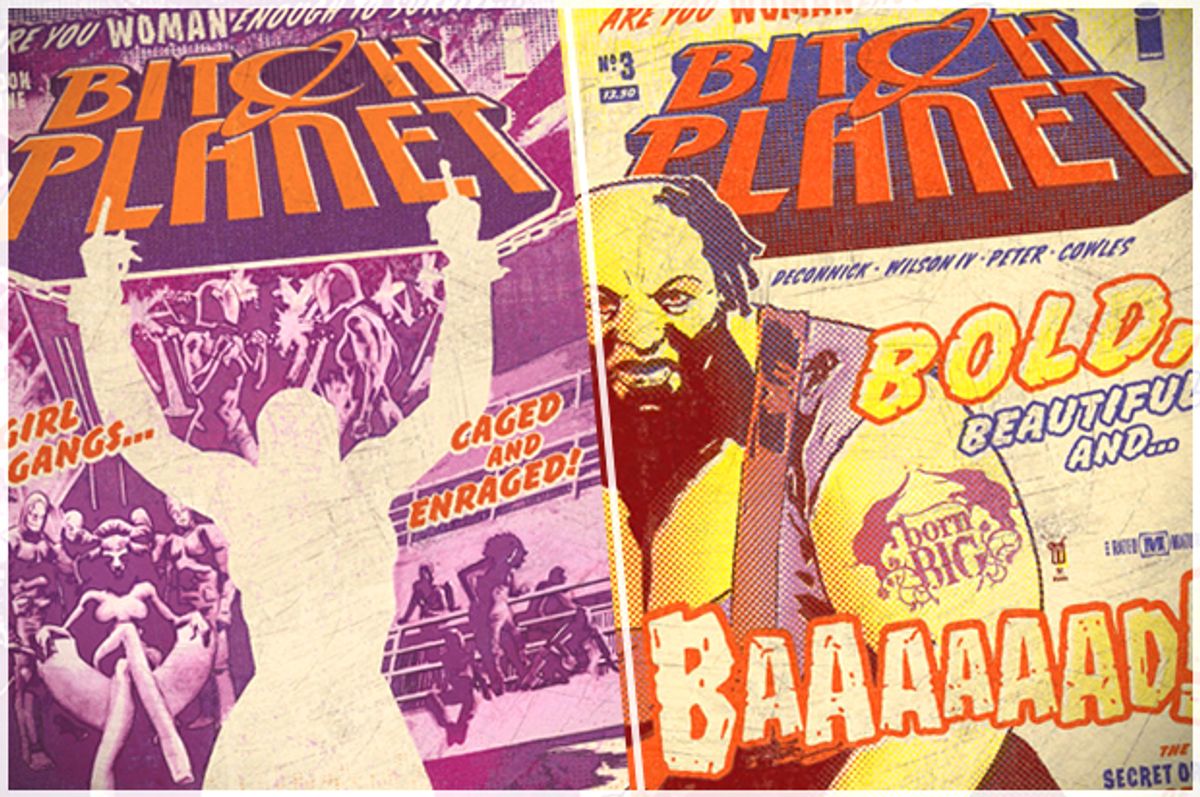 To describe Image Comics’ “Bitch Planet,” it’s helpful to start not with the gorgeously splashy covers, rendered variously in Pepto-Bismol pink, goldenrod yellow, electric blue, but instead with the back cover, that space that on many comics is reserved for ad space. At first glance, the slim issues of “Bitch Planet” look just like any other comic books; the back of each issue looks, in fact, like it is plastered in advertisements. Weird products, maybe, like muffins and cosmetics, but that’s joined by the official “Bitch Planet” poster and an order form in the bottom right corner.

A closer look reveals something much richer. The top of the page is emblazoned with either “HEY KIDS, PATRIARCHY!” in spaghetti-Os boldface or “Advice For Ladies” in nauseating lavender script. The advertisements are for products like “Flower Patch Snatch,” a douche that comes in both original and spicy cinnamon taco flavors, marketing to its imaginary audience by proclaiming: “Your vagina is disgusting.” Or a tapeworm—“Delicious Cestoda”—that promises, “WE GUARANTEE YOU WILL LOSE: Your balance! Your energy! Your joie de vivre! Your will to live! AND KEEP IT OFF.” “WE GET BY WHEN WE COMPLY” reads a sweet cross-stitch print, embellished with two blood-red hearts. Another, smaller one, makes a more pointed observation: “YOU’LL NEVER BE ENOUGH.” Black-bordered boxes, masquerading as classifieds, announce “Missed Connections,” such as: “According to the U.S. Surgeon General, domestic violence is the leading cause of injury to women in the United States.” And most importantly, an ad for a temporary tattoo that reads “NC” in stylized block lettering asks: “Are you non-compliant?... PUT IT ON YOUR FACE.”

Welcome to “Bitch Planet,” a subversive, snarky, woman-centric state of mind, where “PUT IT ON YOUR FACE” is an apt unofficial motto. The cheeky, satirical, darkly funny series gets at you both in its story and in its proudly flaunted agenda—feminism, undiluted by shame, politeness, or conventional wisdom. You can really buy a “Bitch Planet” poster, a “non-compliant” tattoo, and the comics’ spirit fingers—a foam finger to wear over your hand, but huge, pink, and oh yeah, a middle finger—using the order form in the corner. But the rest of the advertisements are just reminders—lurid, pulpy reminders—that all is not right in the world, either in the dystopia where the story of “Bitch Planet” takes place or our own.

Just four issues in, “Bitch Planet” has become a lightning rod, attracting the attention of unlikely intellectuals like Atlantic national correspondent Ta-Nehisi Coates and liberal pastor Nadia Boiz-Weber as well as countless fans who have already taken the comics one step further and gotten “NC” permanently inked onto their skin. It’s skillful pastiche, engrossing genre melodrama, and feminist critique—but above all, it’s unabashed. In a world where ads for maxi pads still won’t depict blood and feminism is a divisive term, “Bitch Planet” is altogether one giant, pink middle finger.

“Bitch Planet” is the product of writer Kelly Sue DeConnick—a powerhouse in the comics world, at this point; she’s the writer behind operatic Western series “Pretty Deadly” and Marvel’s “Captain Marvel,” about blonde Avenger Carol Danvers—and artist Valentine De Landro, who is also the artist for Marvel’s “X-Factor.” It tells the story of a future, damaged Earth ruled by paternalistic, faith-spouting men. In this place, women are supposed to be a certain way. If they are difficult, troublesome, non-compliant—they are put in a spaceship and sent to the Auxillary Compliance Outpost, better known as Bitch Planet. Yes, it’s a literal planet. A floating prison-slash-ghetto, for the problem cases that interfere with a literal patriarchy back on earth. Surveillance is constant and the brainwashing is high-tech. In the first issue, though, the patriarchy realizes they might need something from Bitch Planet. And that’s when things start to happen.

That’s essentially the story for the first four issues of “Bitch Planet”’s first volume. It’s breathtakingly simple: “The Handmaid’s Tale,” in space. And yet the economy offers the story a ruthless sort of elegance, too; everything is out in the open, from the naked and carelessly exploited bodies of the prisoners to the pink-lettered, faux-scriptural drivel they are expected to comply with. The story hovers between the outsize, fantastical satire of patriarchy and a subtle cultural critique that ferrets out micro-aggressions and micro-oppressions, from constantly apologizing to constantly dieting. Unlike our world, where conversations about the systemic war against women’s bodies are often complicated or sidelined by hashtags like #NotAllMen and the specter, imagined or otherwise, of false rape accusations, “Bitch Planet” is emphatically, exaggeratedly black-and-white. It embraces the over-the-top reality of a cautionary tale to tell a story that is partly a horror of oppression and a fantasy of rebellion.

The series gleefully evokes pulp comics, the cheap and numerous comics from the first half of the 20th century that put every imaginable fantasy into splashy illustration and dynamic text. It’s a form that takes that which is titillating and doubles down on it, capitalizing on cheap thrills and quick hits, captivating for its outsize, campy, funhouse mirror depiction of our world. Colorist Cris Peter strategically deploys fields of color done in dotted matrices (the kind that Roy Lichtenstein made into high art). Issue three makes use of flashbacks, and adds to the mood by steeping even further in pulp: sound effects splashed across the page in block lettering, thicker and cartoonier lines, and even slightly yellowed pages, so evocative of the era that I half-expected the paper to be cheap, too.

But more than an homage to pulp, the comics seem to be eager to push the envelope in nearly every direction. Pulp is from an entirely different era than the heyday of zines, which is what the cynical and DIY-feel of the back cover appears to reference. The back matter of each issue also contains a bloggy essay from a current Internet feminist—Worthies so far have included Danielle Henderson, Megan Carpentier, and Mikki Kendall. And meanwhile, the issue titles evoke softcore pornography: “She’s here to see these HARD WOMEN do HARD TIME,” reads the first issue’s cover; the second is subtitled “GIRLS! GIRLS! GIRLS!” And “Bold, Beautiful, And BAAAAAAD!: The Secret Origin Of Penny Rolle” could comfortably be the title of a Cinemax original film, airing only at 4 a.m. on weeknights. And as Bitch Planet is a prison populated by women of every shape, size, sexual orientation, and race—unsubtly borrowing a page from “Orange Is The New Black”’s playbook—the comics toy with many sub-genres of exploitation, most notably that of women in prison. Lesbians do have sex in a communal shower by issue four, and De Landro’s art revels in the characters’ mingled and diverse bodies. But they’re also trading information on the prison’s inner workings and plotting how to get around the guards’ demands—and getting off, of course, but who can blame them? They, and we, are having too much fun.

And that is, ultimately, the strength of “Bitch Planet”—it’s a trip. The comic book feels like one of the most unique and subversive artifacts of pop culture in recent memory. It’s borrowing from what appears to be every possible mode of expression—shifting tones, visual styles, and perspectives—in order to say, loudly and boldly, that there is something not right about the way we treat women. It might not all stick for everyone, but I can only hope that some of it sticks for everyone.