Ricky Gervais and other funnymen talk playing 'the race card' and PC humor: "It's about stupid people misunderstanding jokes and then getting angry" 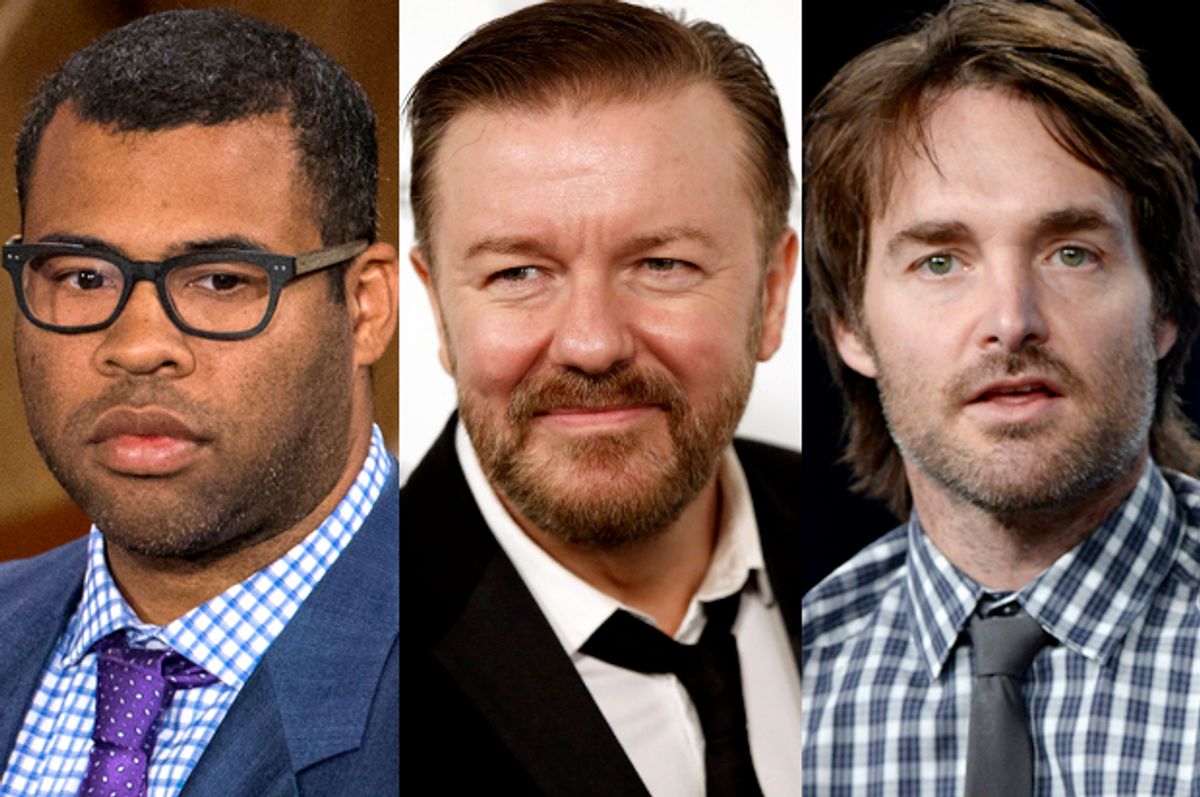 For another of their Emmy roundtables, The Hollywood Reporter got together six comic actors — “Portlandia’s” Fred Armisen, “House of Lies’” Don Cheadle, “The Last Man on Earth’s” Will Forte, “Derek’s” Ricky Gervais, “Silicon Valley’s” Thomas Middleditch, and “Key & Peele’s” Jordan Peele — to discuss the state of their industry. As with THR's other roundtables, the conversation oscillated between playful banter and more serious topics, such as the effect of political correctness on comedy and what it means to play the "race card.”"

Speaking about his experience on Comedy Central, Peele praised the network for not being afraid to push boundaries. As he put it, "There's a lot of questioning of the zeitgeist and questioning what's relevant. We're also targeted at kids, so we have to write sketches about Drake and shit. But one of the main reasons our show has been successful is that the network has allowed us to go places, even pushed us over the line sometimes. And we have this wonderful thing called the race card, which we can play at any point. Any time we get a note we don't like, we say, 'It's a black thing;" and that's the end of the conversation.” (He added jokingly later: "Thank God Hollywood does not hire black execs”).

The interviewer also asked the group whether there was trend in comedy they found “irksome,” to which Gervais went on one of his familiar screeds about oversensitive audiences. "Yes, idiots confusing the target of the joke with the subject of a joke," he responded. "It's getting worse and worse. I am all for political correctness, but it's not about that. It's about stupid people misunderstanding jokes and then getting angry. At least understand the joke before you dislike it. There was a review once of one of my comedy gigs that said: "Ricky Gervais should be banned. His subject matter deals with da-da-da." That review [shouldn't] count."

Middleditch, meanwhile, demurred, saying "I think you can argue comedy. You can be like, 'That's not funny,’ and someone says, 'Yes, it is.’"

For his part, Middleditch’s major gripe is that "in feature comedies right now, there seems to be a staleness; a formula where everything works out in the end and you'll see the two-minute trailer and you might as well have just already seen the movie.”

"There's nothing else to it,” he continues. “Then again, I could be not the right person to be the arbiter of what's good or not because there's plenty of TV shows that get millions of viewers, and I'm like, 'I can't sit through 22 minutes of this.’"

Check out the rest over at THR.