Sam Brownback is winning: Don't be fooled by the hype -- his radical experiment is far from finished 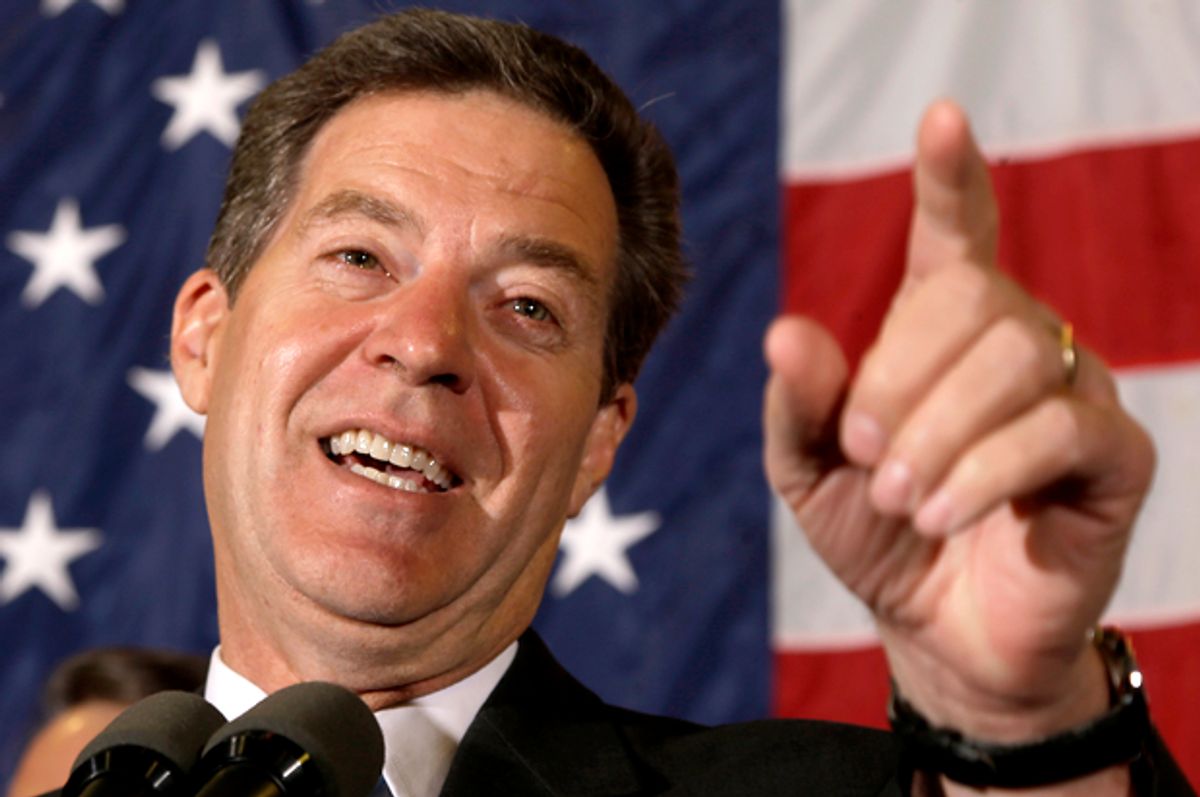 Sam Brownback, like most ideologues, is a simple man. The story of how he turned Kansas into a post-modern operating theater, where everyone could watch supply-side economics transform a body politic into a battlefield of class warfare, on the other hand, is not. But to understand why the GOP’s anti-tax absolutism inexorably leads to nakedly factional and shamelessly plutocratic governance, you’ll need to understand them both.

Let’s start simple. Except for a brief flirtation with Bob Dole-style moderation back in the early ‘90s — a persona he abandoned upon realizing that something was, in fact, the matter with Kansas — the failed presidential candidate and former U.S. senator has always been an orthodox, even doctrinaire conservative Republican. He loves Jesus, hates abortion, opposes marriage equality and wants to roll back the welfare state.

There are no mysteries roiling beneath Brownback’s placid surface. No matter the issue, his will follow wherever a plurality of the religious right leads. So when the governor signed a budget raising the state sales tax on Tuesday, many of his foes, including a significant bloc of anti-Brownback Republicans, thought it was the resolution of a fight Brownback himself had started. He put his supply-side nostrums up against reality itself. And — surprise, surprise — reality won.

To Brownback’s more sanguine critics, it looked as if the supply-siders, after holding the political edge for more than a generation, had finally self-destructed. The massive tax cuts for the wealthy authorized during Brownback’s first term were supposed to prove, definitively, that the “trickle-down” model worked. It wasn’t a crackpot fantasy or “voodoo economics.” But without the insanity-reducing influence of Democrats and anti-Brownback Republicans, the radicals discredited themselves. They blew a crater into the state's finances — tax revenue fell $338 million short of expectations for fiscal year 2014, according to the liberal Center on Budget and Policy Priorities — and Brownback limped into a second term.

That’s certainly a way to interpret recent events in Kansas. But it’s not the only one. Another view would give Brownback and company less reason to worry. It would note that Brownback, thus far, hasn’t done anything unprecedented — including the tax hikes. It would note that popular governments built on soaking the poor exist today and throughout history. And it would caution opponents of supply-side economics not to update Arthur Laffer’s Wikipedia page just yet.

Because here’s the thing about top-down class warfare that liberals either can’t remember or won’t accept: It’s been happening since the ‘70s, it’s the modus operandi of one of the country’s two major parties and, to paraphrase Warren Buffett, the bad guys aren’t winning — they’ve already won. Brownback’s enemies note that a sales tax hike will hit poor Kansans the hardest, and that the poorest quintile of Kansas families is already the only to see its taxes increase under Brownback. That’s terrible, absolutely; but how is it different from what the Reagan era GOP’s always done?

Ever since the conservative movement won control of the Republican Party and put Reagan in the White House, the GOP’s macroeconomic policy has — with a brief exception in 1990 — adhered to a clear dynamic. They hope to reduce domestic spending, but they must cut taxes for the rich. Doing both is the dream, but as Reagan discovered and Brownback’s learned, cutting spending will hurt a politician in a way slashing taxes won’t. It turns out most people, even the “real Americans” of Kansas, would rather fund schools than lower taxes for the 1 percent.

On the federal level, Republicans wiggle out of this dilemma by following Reagan’s playbook. They take an axe to domestic programs intended to help the working poor and the destitute, whose political influence is negligible and almost exclusively born by Democratic politicians, leave universal programs like Social Security and Medicare alone — at least for those already receiving benefits — and watch the deficit take off. Reagan “proved” that “deficits don’t matter,” after all. Or at least they don’t matter until a Democrat is president.

A similar process unfolds on the state level, too. But because most states have at least some kind of balanced budget provision in their constitution, letting the deficit balloon usually is not an option. Which leaves uncomplicated ideologues like Brownback, who’d never dream of holding or raising taxes on the rich, with no choice but to find the needed revenue by squeezing the poor — both at the grocery store and through petty fines that amount to a poverty tax. The result is class warfare, with the state acting as both the shield and the sword of the rich.

While I’d love to believe that this bait-and-switch has finally run aground in Kansas, until there are signs that the state’s marginalized and working poor are becoming radicalized, I see no reason why Brownback can’t keep running things as he is. Republicans have stuck with this system for going on four decades now, and while it’s not gone perfectly, it’s hard to look at their numbers in Congress and the states without declaring it a success. Sam Brownback is not finished; he may have only just begun.