Despite a surge in the polls and huge crowds for his speeches, the press still treats Sanders like a sideshow 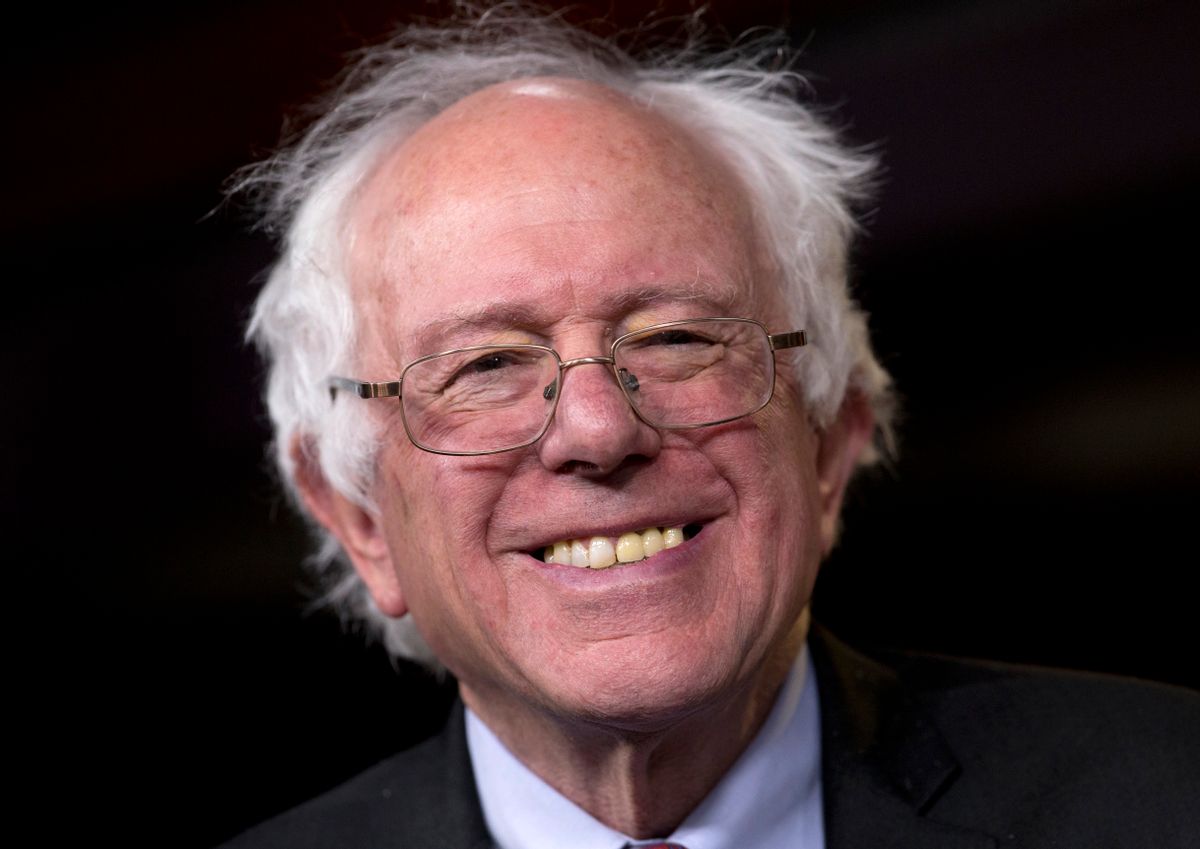 Vermont Senator Bernie Sanders has been in the race for over a month, but to the casual media consumer you’d hardly notice. His candidacy has largely been dismissed by the mainstream media as a "protest” campaign or a means of “moving Clinton to the left” (whatever that means). It’s a stunted worldview that presumes it’s the media’s job to vet “serious” candidates before the voters get to have any say in the matter. And because fundraising precedes voting, it inevitably becomes a power-serving and harmful tautology: the media insists Sanders is not a “serious” challenger because Clinton has big money support; they then internalize this conventional wisdom, and before a single vote is cast, dismiss him. It’s a perverse feedback loop that puts undue influence in the hands of early power signifiers and bears little resemblance to a healthy democracy.

Here are four ways the media has embraced this toxic logic and how it manifests in their coverage of the Vermont senator.

As liberal media watchdogs Fairness and Accuracy in Reporting (disclosure: I occationally write for FAIR) and Media Matters have noticed on several occasions, Bernie Sanders is routinely ignored by the press despite drawing large crowds and ushering in impressive fundraising totals. Two recent examples are a May 26 5,000-strong rally that was barely covered by the mainstream media, and a nearly nine-month stint of not being mentioned by establishment Sunday morning gatekeeper Meet the Press. While the quantity of coverage of Sanders' campaign has increased a bit, due largely to pushbackfrom the aforementioned organizations, the quality is still very much wanting.

2. Discussing his candidacy entirely in the context of Hillary Clinton.

One of the stranger tics our pundit classes and establishment journalists display is to think of Sanders only as bad cop to Clinton’s good cop; that his value matters only to the extent to which he can effect the Clinton machine. This was on full display in a New York Times piece two weeks ago that somehow interpreted Sanders' large crowds as a manifestation of Hillary ambivalence, rather than support for Sanders: "Judging from Mr. Sanders’s trip here last week, there is real support for his message — though some Democrats also simply want to send a warning shot to Mrs. Clinton to get her to visit here more."

In a piece ostensibly about Bernie Sanders, Clinton's name was mentioned roughly as many times as Sanders' was. Even his first major media appearance on ABC’s This Week after his announcement in May was framed by the host as “How will this affect Clinton?” After opening up with his case for being president, focusing on how the billionaire class owns our political process, the very first followup question by (former Clinton aide) George Stephanopoulos was, “Does this mean you think Clinton is part of the billionaire class?” Before he could even get out his reasons for why you should vote for Sanders, he’s already asked to explain why one shouldn’t vote for Hillary Clinton. This also extends to the torrent of articles about whether Sanders will “hurt” or “help” Clinton, as if the Democratic primary has been foretold by scripture. None of these hot takes, however, posit whether Clinton is helping or hurting Sanders.

In one of the laziest sleights, the media has a terrible habit of asserting Sanders “can’t win” or is not a “realistic” candidate. Perhaps Sanders is a long shot, but the media shouldn’t play kingmaker and decide the veracity of candidates long before the public has had a chance to weigh in. The pollsconsistently show Sanders, at the least, gaining traction and eating into Clinton’s considerable lead. As FAIR noted last week, the New York Times has a strange fetish over the “is he electable" question, framing a Sanders rally as such:

[Clinton’s] mix of centrist and progressive Democratic views may yet prove more appealing to the broadest number of party voters as well, while some of Mr. Sanders’ policy prescriptions — including far higher taxes on the wealthy and deep military spending cuts — may eventually persuade Democrats that he is unelectable in a general election.

But as FAIR would point out, this is counter to everything we know:

It sounds like it’s the New York Times that’s hoping to persuade Democrats that Sanders is unelectable.

As we’ve noted (FAIR Blog, 4/20/15), the idea of raising the taxes of the rich is quite popular with the US public. Gallup has been askingfolks since 1992 how they feel about how much “upper-income people” pay in taxes, and 18 times in a row a solid majority has said the rich pay too little. For the past four years, either 61 or 62 percent have said the wealthy don’t pay enough; it’s hard to figure why Iowans would conclude that Sanders is “unelectable” because he takes the same position on tax hikes for the wealthy as three out of every five Americans.

This brings us to the last, and most frustrating entry.

Despite years of corporate media arguing otherwise, Americans really aren’t conservative. They self-identify as “conservative,” but when asked about major progressive policy issues, from taxation to war to marriage equality, they are overwhelmingly in sync with Senator Sanders. Yet the media consistently claims Sanders is somehow to the left of mainstream opinion when he manifestly is not. Sanders is a sitting U.S. senator who has repeatedly won as a progressive independent with 60%+ of the vote in a state that, while generally liberal, had a Republican governor from 2003-2011. Even setting aside ideology, there’s little empirical evidence Sanders’ positions are in any way outside the mainstream. Vermont may lean slightly to the left, but it’s not any more liberal than the Illinois Obama represented in 2007.

There are plenty of good policy reason to oppose Sanders. Some have argued he’s too conservative on guns and Israel. Others on the left argue he’s too compromised by the establishment. Commentators such as Charles Davis arguing his run is a distraction for progressives while more traditional socialists like Bruce Dixon of the Black Agenda Report view his campaign as a cynical “sheep dogging” exercise designed to channel progressives into the Clinton machine. These are all fair, substantive critiques of Sanders and worthy of discussion. Yet that’s not how his campaign is being framed, it's being framed as a combination of novelty sideshow and horse race speculation. Having an insular media class debate, ad nauseum, over whether Sanders can defeat Clinton in primaries that are many months away does a disservice to the voters and our already teetering institutions of democracy. Let’s be critical of Sanders, absolutely. But let’s be critical of him as a presidential candidate, not his hypothetical inability to win an election the public has yet to consider, much less chime in on.