Judd Apatow's Cosby crusade: He's not going to be quiet about the rape allegations 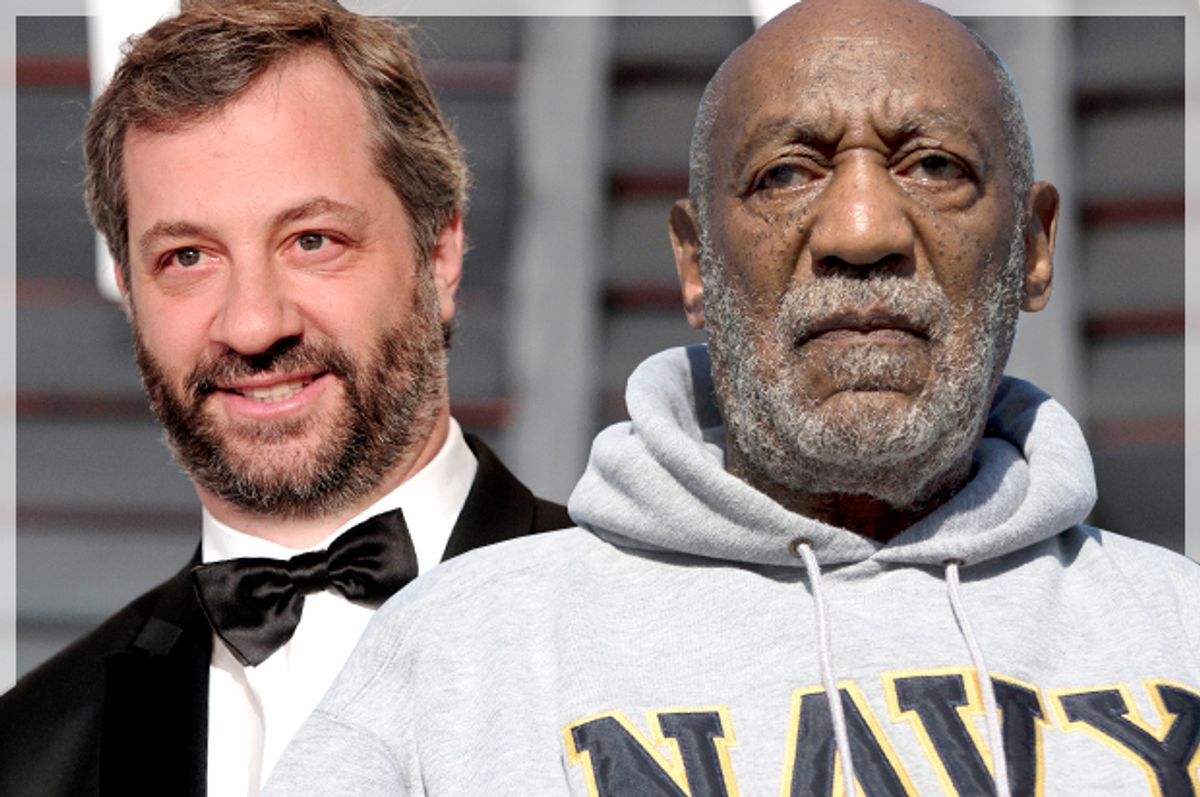 When the sexual assault allegations against Bill Cosby broke last fall, Judd Apatow was one of Cosby's most outspoken critics, using every available opportunity to call out the comedian on Twitter (to the extent that "Black-ish" creator Kenya Barris noted that Apatow’s outrage "borders on strangely obsessive”).

Public outcry in general over the Cosby allegations has quietened down in recent months, but Apatow continues to find ways to bring them up. Now on a press tour for his new book of comedic interviews "Sick in the Head," the director has been taking every available opportunity to remind the public of Cosby’s alleged crimes.

On the very first page of his new book, Apatow writes about how Cosby got him in to comedy, and the subsequent disappointment at discovering his idol's true colors. As he writes:

“I have been completely obsessed with comedy for about as long as I can remember. I blame my dad. My dad was not a comedian, but he may have secretly longed to be one. When I was a kid, he would play us Bill Cosby records and even took me to see him perform at Hofstra University for my birthday when I was in fifth grade. (Note: In this introduction, I was going to talk at length about Bill Cosby, but I can’t, in good conscience, because he has more sexual accusers than I have had partners.)

In an interview for New York Times' "By the Book" section on June 8, Apatow answered one of the normally lighthearted book feature's stock questions with a dig at the recent high-profile Cosby biography, which omitted Cosby's abuse scandals and lawsuit, which was settled out of court in 2006:

INTERVIEWER: And what’s the worst book you’ve ever read?

APATOW: “Cosby: His Life and Times,” by Mark Whitaker. It left out the chapter about serial rape accusations. Other than that, I’ve really enjoyed hearing about his “I Spy” days.

INTERVIEWER: What book hasn’t been written that you’d like to read?

Apatow also made a joke at Cosby's expense on a recent "Daily Show" appearance, and Tuesday on "Late Night With Seth Meyers," he defended his Cosby criticisms, saying “Some people say ‘why talk about it?’ Which is kinda like saying ‘leave a rapist alone!' Aren’t we supposed to say we don’t like this?”

During the recent Trainwreck Comedy Tour stop at New York's Beacon Theater, promoting his new Amy Schumer comedy “Trainwreck,” the New York Times reports: "Mr. Apatow also had a wobbly start, with microphone problems and a Bill Cosby impression that was not nearly as compelling as his tweets about that comic." What seemed at first like an off-the-cuff comment in the "Book Ends" interview 10 days ago now appears to be the start of a personal campaign to keep the Cosby rape allegations in the public conversation.

So why does Apatow continue to hammer this issue now, after the media frenzy that surrounded the series of alleged victims as they stepped forward has subsided? Perhaps, as Barris said, there is something “obsessive” about Apatow’s focus. He does seems to have a personal investment in the subject that goes beyond obligatory condemnation or even the disgust many fans and comedians feel about a once-beloved cultural figure who stands accused of being a serial rapist. Apatow has positioned himself lately as a champion of feminist voices, working with leading outspoken female comics like Lena Dunham and Amy Schumer, but this anger seems to come from a place deeper than mere social conscience. He's returning to the barbs even after "the Cosby joke" has been relegated to the "non-topical" pile. (How fast our news — and so our comedy — cycle moves.) Apatow opened his own book about comedy with Cosby in his 2015 context — that's a statement meant to last. Clearly, Cosby — the man, the public figure, the alleged crimes — strikes an intimate chord.

It doesn’t really matter why Apatow is speaking out. What's significant is how solitary a figure he cuts in his sustained outrage. Through the late winter and early spring, as the number of alleged victims speaking out grew, a sense of "Cosby fatigue" settled over the press and the public. Coupled with a dearth of true advancements in justice in any of the cases — a frustrating lack of momentum largely stemming from expired statutes of limitation — the story felt, sadly enough, redundant. So Apatow's continuing to keep the story alive feels surprising — and we should keep asking ourselves why.

As my colleague Jenny Kutner aptly put it back in February:

"The women coming forward and telling their stories is the first crucial step toward that change, and part of a larger movement for us to finally confront our problem with sexual assault. The next step is for us to actually listen to them — every one of them. If we’re exhausted by the headlines before we can even do that work of listening, it might be worth examining why. These stories aren’t just updates on a timeline of whom Cosby assaulted, when he did it and when the survivors finally felt they had the strength, support and opportunity to speak out. Their accounts of violence are not salacious gossip about a single bad man, but an indication that our culture systematically rejects the reality of that violence. They are evidence of how much work we have to do to prevent others from even having these stories to tell — and then maybe these horrors will become so rare as to never seem banal again."

While Apatow's tone and approach may rub people the wrong way, his voice is an important one. In continuing to talk about the case, Apatow is using his very public platform — not to mention the usually self-serving exchange of the book and film press tour — to honor the 30-plus women who were brave enough to come forward and share their stories. It might look like his personal obsession, but he's amplifying their voices — voices we shouldn't forget about just because we have "fatigue," even as Cosby's name largely fades from the headlines.