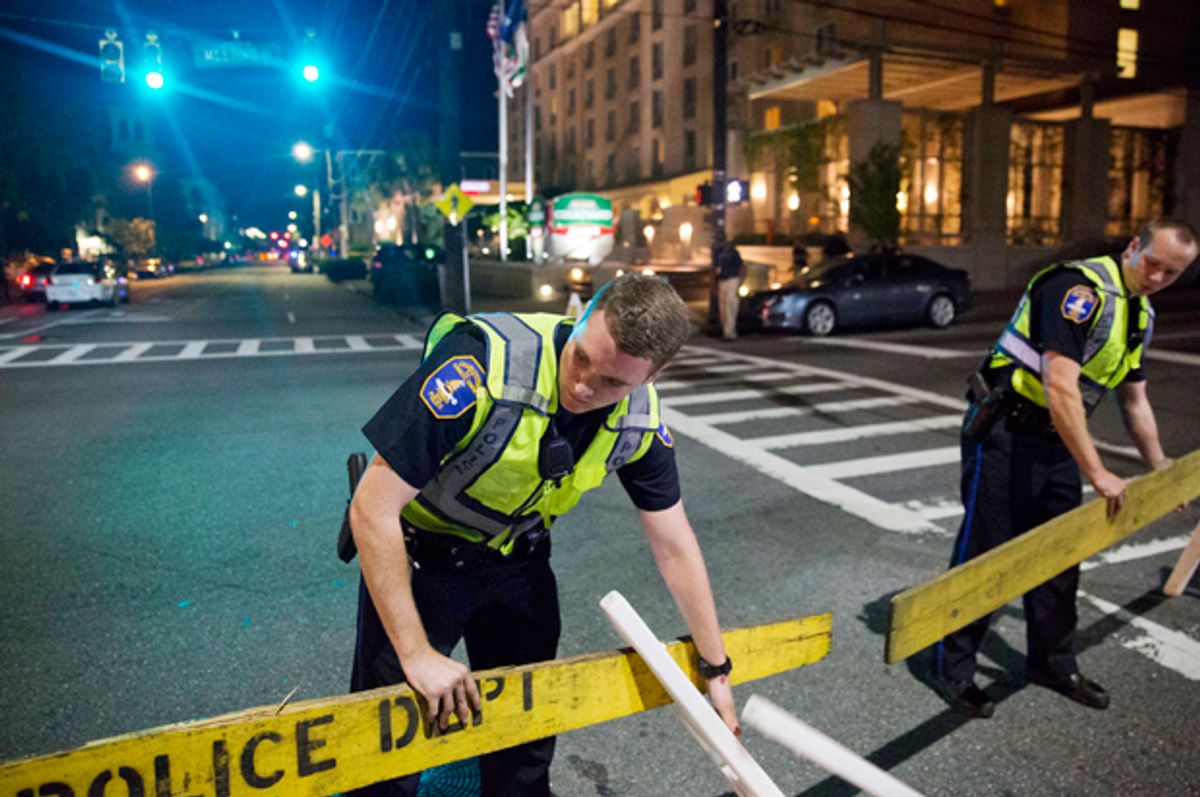 Police close off a section of Calhoun Street near the Emanuel AME Church following the shooting, Wednesday, June 17, 2015, in Charleston, S.C. (AP/David Goldman)
--

There are nine people dead in Charleston, South Carolina, where a young white man has been arrested for opening fire on black churchgoers gathered for Bible study at Emanuel African Methodist Episcopal Church. This isn't the first time the church has been the target of anti-black terrorism, and the tragic events that played out Wednesday night come close on the heels of another act of violence that brought national attention to the Charleston region.

Emanuel AME isn't all that far from where Walter Scott, an unarmed black man, was killed after being shot in the back by a white police officer named Michael Slager. Scott's death is a reminder that how we talk about the violence committed against Emanuel AME will have different contours than other recent mass shootings. The attack on the historic black church means grappling with white supremacy and state violence, and these are not questions that can be answered unless these critiques are part of the demand for tighter gun regulations. Slager was armed by the state -- the legality of his weapon didn't make it any less lethal to Walter Scott.

But there are still questions here about guns. As the Guardian's Gary Younge wrote Thursday morning, the violence in Charleston "marks a doubling down on the nation’s twin pathologies of racism and guns." In a speech Thursday afternoon, President Obama also connected the shooting to a set of policies that make it remarkably easy to get firearms.

“I’ve had to make statements like this too many times. Communities like this have had to endure tragedies like this too many times,” he said. “Innocent people were hurt because someone who wanted to inflict harm had no trouble getting a gun. Sometime as a country we’ll have to reckon with the fact that this type of mass violence doesn’t happen in other advanced counties. It doesn’t happen in other places with this frequency. It is within our power to do something about it.”

Earlier this month, I interviewed Colleen Barry, a researcher and associate professor at the Johns Hopkins Bloomberg School of Public Health, about a study she authored on the consensus that exists among gun owners and non-gun owners on how to make the United States less lethal. She conducted the original version of her study in the wake of the Sandy Hook shootings, a time when there was a groundswell of support for reform.

Barry revisited these same questions again this year to see if the mood had changed since 2013. At the time we spoke, Barry said that she repeated the poll because she wanted to conduct the survey at a moment when the nation wasn't gripped by yet another mass shooting. But as the violence at Emanuel AME reminds, those times feel increasingly few and far between.

We discussed public opinion on gun safety, the disconnect between Americans and their elected officials and what the data might mean for shifting policies and preventing violence. Our conversation has been condensed and lightly edited for clarity.

This study is building on work that started in 2013 in the wake of Sandy Hook. Why did you revisit these questions in 2015?

We fielded an original study in 2013, two weeks after the Sandy Hook tragedy. What motivated us at that point in time was that the only information we had on polling was broad, general questions that can capture a mood, but often provide policy makers with specific information about the public’s attitude about specific policies that actually could be passed at the state or federal level. We were motivated to go into the field quickly with a poll to try to provide that kind of information.

Now there are two reasons why we decided to re-poll in 2015: one was that a criticism of our work, which I thought was a very legitimate criticism, was that we polled Americans at a very specific, very emotional moment in time -- right after the [Sandy Hook] tragedy. I was moved by it and I believe many people probably were, but the poll might not reflect stable public views on the issue because we surveyed at that specific moment.

So I have been interested in testing that critique and trying to go back in and say, “OK, when nothing major is happening in terms of these awful mass shooting events, where are America’s attitudes about gun policy and how do they break down by gun ownership status?”

The second motivation was that too often pollsters ask the public whether they support gun control generally rather than ask about measures to keep guns from criminals or other high risk groups.

There is a Pew poll you cite in your work for exactly this reason. That study asked respondents: “What do you think is more important -- to protect the right of Americans to own guns, or to control gun ownership?” Fifty-two percent of people answered that protecting the right of Americans to own guns took precedent, which was a 7 point increase from when Pew polled the same question in 2013.

I totally understand that Pew keeps asking that question -- to have this timeline with the same wording in order to track mood over time. But that said, it’s not a very good question at all.

They probably know that as well as I do. First, it doesn’t convey the policies that are being discussed in the public debate. Second, this concept of priming is well established in social science research and using the term “right” vs. “control” can prime respondents. This could be, frankly, more pronounced over time in this era of growing political polarization.

And then third, while the question may capture some general mood about rights vs. control in a generic sense, it’s not actionable in the sense that it doesn’t provide us with any concrete information about how Americans view the many different possible policy options out there that policymakers have to choose from when thinking about whether and how to address gun violence in their jurisdiction.

The questions in your survey are quite specific on those points. Was there a difference between the study from 2013 and what you found this time around?

I was genuinely surprised that we didn’t see more differences between 2013 and 2015, especially in the context of the news media coverage around the most recent Pew poll. For many, many policies, there was no differences over time -- and that’s in the face of an evolving political environment where we didn’t see a lot get passed in the post-2013 period.

And we see virtually no difference in support between gun owners and non gun owners. That was what we found in 2013 and it continued to be true. And it flies in the face of rhetoric. What I was struck by was that the poll suggests to me that regular gun owners may have views that look different than the leadership within the movement.

Did you see any declines on specific policies?

Where we see decline between 2013 and 2015 is the two most controversial policies and the two that are really most problematic for gun owners, which is the support for the ban on assault weapons. That’s decreased overall from 69 percent to 63 percent. Gun owners were always lower on those policies, but still had majority support.

One of the most interesting things about those specific statistics and a lot of them weren’t measured in the survey, was where we find a small erosion in support for policies between 2013 and 2015, they occurred almost entirely among non-gun owners. So gun owners are actually more stable in their beliefs that non-gun owners. So the small erosions among non gun owners are interesting to me and I can’t say what that is all about.

They are quite small, but perhaps they suggest some sort of belief that we are actually going to have movements on these issues or just changing attitudes towards the policies themselves. But very stable views among gun owners.

Particularly in the areas getting a lot of traction in the news -- like keeping guns away from domestic abusers.

We see for some of these policies, like prohibiting a person subject to a restraining order from having a gun for the duration of that order, 77 percent of gun owners supported it and 79 percent of non-gun owners supported it. There is virtually no difference. But again, a lot of the rhetoric is around this or that divide between gun owners and non gun owners that would suggest there is no middle ground for coming together about policies to keep guns out of the hands of high risk individuals.

This study is now part of a larger body of work on how a majority of Americans feel about guns and gun safety. There is all of this data that shows consensus and some of that is reflected in policies advancing at the the municipal and state levels, but Congress has repeatedly failed to act.

You are right to point that there are certain jurisdictions where policy change has been possible. Certainly not at the federal level. California just passed a nonviolent restraining order policy, which is the first in the country and a model law. But with regard to the political will, I’m a researcher so it’s hard for me to speak to that beyond the idea that it was important for me to do this research.

The democratic process is such that we should pay close attention to the public’s opinion on important policy issues. And to the extent that you have interest groups with a lot of power and small groups that are making policy that don’t reflect the views of a larger constituency or society more broadly... that’s just problematic in terms of governing.